We kicked off our series by looking at the 1st and 2nd line centermen and we continue on to the 3rd line. 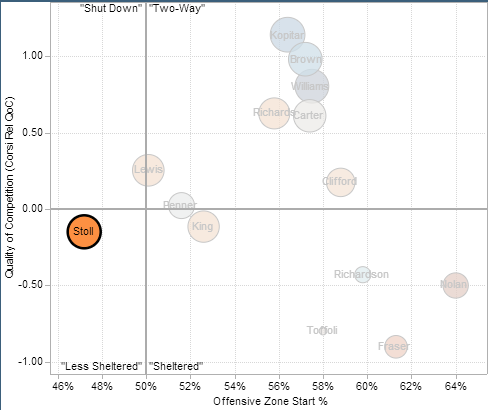 Positives: Jarret Stoll’s primary focus this season seemed to be defense. His primary linemates were the defensive minded Dwight King and Trevor Lewis. Stoll also started more of his shifts in the defensive zone (as compared to the offensive zone) than any other forward on the team. In that role, he still managed to post solid possession numbers. His Fenwick rating of 55% was the best of his career. In addition, he was on ice for the 2nd fewest shots on goal and scoring chances against (per 60) among forwards.

He even ended up logging more ice time (both overall and at even strength) than Mike Richards. This shows that the staff had a lot of faith in him as they felt comfortable putting him on the ice in a variety of situations. In fact, he lead forwards in shorthanded ice time. And it was in those situations that his team leading faceoff percentage was really counted on.

Negatives: Stoll’s shot production has really fallen off in recent years. From 2007 through 2011, he managed 6.9 shots on goal for every 60 minutes of even strength ice time. Over the last two years, that production has dropped to 5.9. This past season alone it was an extremely low 5.3— 4th worst on the team. In addition to his low shot rate, he was also last among forwards in his ability to record scoring chances. He didn’t fare any better in playoffs either as he was unable record goal and only recorded a single point.

And while other low shot producing centers Mike Richards and Anze Kopitar were still able to make plays and log a lot of assists, Stoll was not. This was no doubt a byproduct of him spending most of his time with defensive minded forwards, but still someone on the 3rd line has to take the reins in terms of offensive production. And who better among the members of the 3rd line than a two-time twenty goal scorer.

Looking Ahead: It’ll be interesting to see what happens with Stoll this off-season. It’s seems unlikely that he’d be moved since he seems to be held in high esteem by the organization. That being said, the team is very deep down the middle and should they feel the need to free up more cap room, his $3.2M cap hit might be looked at and Trevor Lewis has shown himself to be a viable replacement.

If he is indeed back next season, and odds are that he will, he’ll be looked at to provide a little more in terms of offensive production. This is where the acquisition of Matt Frattin and the possible promotions of Tanner Pearson and Tyler Toffoli could help. As seen above in the player card, Stoll suffered from playing with pretty average linemates (Corsi Rel QoT). Playing alongside some more offensively capable wingers could provide a boost to his production.

Grade: Although he did post some of the best possession numbers of his career, they still weren’t great relative to his teammates. That combined with his drop off in offensive production both in the regular season and in the playoffs warrant a C in our book.