Our fourth-line center had his share of struggles this season and was a healthy scratch at times, but held his spot during most of the playoffs. Let's look at his overall performance in 2013. 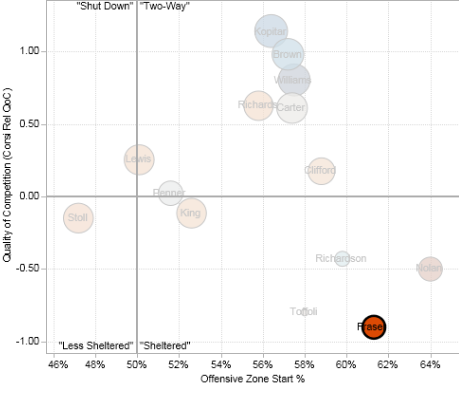 Positives: Look, Colin Fraser is on the fourth line for a reason, and it's not to get a bunch of points. Having said that, Fraser scored points this season at a higher rate than last season; in fact, it was his most effective offensive season since he was a member of the Stanley Cup Champion Chicago Blackhawks in 2010. (Surprise statistic: Fraser racked up more points per 60 minutes than Dustin Brown at even strength.) He also carried a positive Corsi rating through the season; of course, most of his teammates did as well, but he didn't hurt the team when he was on the ice. And when he didn't have the puck, he was hitting people; 71 times in 34 regular season games, actually.

Fraser was scratched for much of April, but he played every playoff game apart from the first one and the last one. Fraser's play on the fourth line was pretty steady overall (with a few exceptions, covered below), even when his minutes were limited. In fact, the fourth line had its moments, none better when Fraser and Brad Richardson or Kyle Clifford were paired with a rotating set of top-6 forwards. Fraser found new effectiveness when centering Dustin Brown or Justin Williams, though we won't be seeing that look in the regular season.

Negatives: Take a look at that player usage chart. Maybe it's not a surprise, given that the Kings have three very strong defensive centermen, but Fraser faced the easiest competition of anyone on the team this season and started in the offensive zone more than any forward not named Jordan Nolan. In and of itself, that's not a negative, but you'd hope that Fraser could have taken advantage of this a bit more. It ended up being quite the opposite; despite holding a slight shot advantage, the Kings allowed more scoring chances than they got overall when Fraser was on the ice, despite the advantageous position he (usually) started off in.

Fraser's faceoff performance was generally weak, as he won 46% of his faceoffs during the regular season and playoffs. He also finished even on penalties taken vs. penalties drawn, but Fraser cost the Kings during the playoffs with badly-timed, confusing offensive-zone penalties on a few occasions. Fraser simply can't make a habit of taking bad penalties, as that's a pretty easy way to get yourself pulled from the lineup. Eventually, it happened; he saw a considerable drop in minutes (Game 3: 5:28) until he was the odd man out upon Mike Richards' return to the lineup in Game 5.

Looking Ahead: Is Fraser's spot in the lineup safe? It's hard to say, especially considering he was sitting in the press box for almost a third of the season. Having said that, Fraser seems to fit Darryl Sutter's ideal of the fourth-line center, and Brad Richardson's likely departure helps solidify his role. The bottom six is turning into a logjam, but if Darryl Sutter keeps Jeff Carter and Trevor Lewis on the wing, Fraser will get regular playing time.

Grade: Fraser's possession numbers were weak and his overall impact declined from last season, but he played his role reasonably well and chipped in on offense. We'll give him a C.