Tom is a freak for puck possession. He just loves it.

Share All sharing options for: Kings vs Blackhawks Game 3: Grades and Analysis

The Kings returned home after a tough two games in Chicago where they had a hard time generating any sustained pressure. They were again without 2nd line centerman and post-season points leader Mike Richards. Things didn't look good.

Darryl Sutter decided to shuffle his line-up for game three in an effort to generate more offense and gain some more favorable matchups. The plan worked as L.A. was able to win the possession battle and earn a deserved win. As Justin Williams put it after the game:

“I think for the most part the result on the scoreboard is usually the result of how the team played. If you didn’t play great, you’re not usually going to win. I thought we just played better than them tonight. They played better than us the first two games...It was a broken-bat single that went in from Voynov there. Hey, we had a lot of zone time against them. That was one that paid off.”

For a recap of the game including highlights and more: click here. 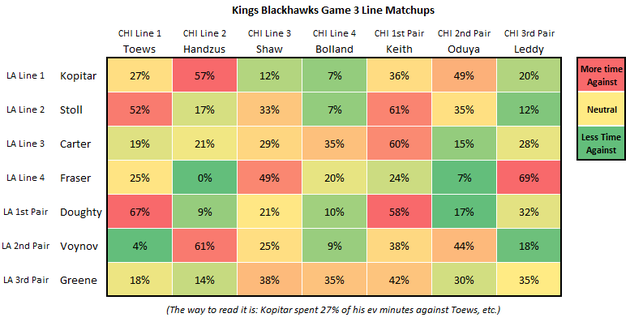