Nolan flew mostly under the radar on the Kings' fourth line this year. Let's put him on our radar for an evaluation. 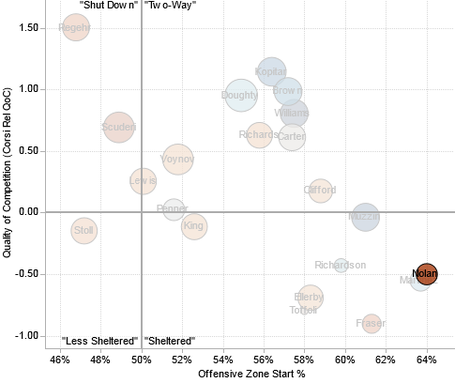 Positives: Jordan Nolan plays on the right wing of the fourth line. With two prolific scorers (Williams and Carter) and a defensive wizard who gets plenty of ice time (Trevor Lewis) ahead on the depth chart, that fourth line right wing isn't going to get a lot of action. So what's the goal? Provide energy, hit some people, don't screw up too much, repeat. Did he provide energy? Sure. Did he hit people? Yup; he ranked in the top 100 in the NHL in hits despite only playing 8:28 per game. Even if the Staples Center scorers are pretty generous in awarding hits, that's impressive. So Nolan did what was asked of him. And in spite of taking a fair amount of penalties, he also drew just as many as he took. Not bad.

In addition, I'll give a nod to the old-school aspect of the game. Nolan fought six times this season, and according to hockeyfights.com, he won four of them and drew one. He actually fought more than Kyle Clifford, and that's a switch that Darryl Sutter would probably encourage as Clifford continues to (hopefully) develop into an offensive threat. If you insist on keeping a guy who fights in your lineup, you'd like him to (a) chip in some points, or (b) provide cheap energy in limited minutes. Nolan fits (b), and that will be a consideration as to whether he keeps his spot in the lineup next season. As of now, Nolan has the lowest salary on the team, and even having filed for arbitration, he's not getting that big of a raise. So his spot on the big club seems pretty safe.

Negatives: So, Nolan's overall numbers (both stat-wise and possession-wise) were... um... not great. Now, the point production doesn't matter all that much; six points in 44 games is about expected for a Kings fourth-liner who gets a lot of penalty minutes. However, you want your fourth line to keep their heads above water. Nolan didn't do that. He was the worst forward on the team in terms of possession, and he was the only King with a negative shot differential. In other words, when he was on the ice, the Kings allowed more shots than they took. He wasn't overwhelmingly bad in this regard, but it's not a flattering number when compared to Fraser, Clifford, etc. This was the case despite Nolan starting his shifts in the offensive zone a whopping 64% of the time.

With some injuries to forwards in the playoffs, there were hopes that he'd step up his game; however, he instead looked overwhelmed. The majority of the Kings were outshot in the playoffs, but Nolan's Corsi numbers were the worst on the team, and it wasn't close. This primarily is because Sutter couldn't shelter Nolan as much during the playoffs; the bottom-six forwards for St. Louis, San Jose, and Chicago were all effective, and Nolan and his teammates consistently ended up pinned in their defensive zone by the end of their shifts. Despite winning the first two games against San Jose, Nolan was removed from the lineup, and only appeared in Game 6 of the San Jose series and Game 5 of the Chicago series from then on. (For what it's worth, Nolan played every playoff game in 2012.)

Going Forward: Jordan Nolan played 44 of 48 games during the regular season. He played seven of 18 in the playoffs; along with the departed Brad Richardson, fellow forwards Tyler Toffoli, Colin Fraser, and Kyle Clifford all saw more action. With Richardson gone and Dustin Penner likely following suit, he should keep a roster spot. He'll have a chance to earn his spot on the fourth line again, but he'll likely have to beat out one of the remaining three players to do so. It seems most plausible that he'll start the season as the 13th forward, with a chance to work his way back if someone gets hurt or if one of the Kings' young guns (Toffoli, Frattin, Clifford, and King) struggles. Hopefully, his growing pains this season set him up for a rebound next season.

Grade: Unfortunately, Nolan's first full season was a bumpy ride, and he didn't progress as much as was hoped after his surprising debut. It's a D for Nolan, whose lineup spot is much shakier now than it was at this time last year.