Is Kovalchuk retiring really all that bad for New Jersey?

You might remember Ilya Kovalchuk. He was this hockey player the Kings were chasing pretty hard way back in the olden days of 2010. In fact, some considered L.A. to be the "prime suitors" for his services. As we all know, L.A. missed out on Kovalchuk as he signed to the Devils on a 17-year, $102 million contract. Well earlier today, 3 years into his contract, Kovalchuk announced his retirement.

Now at just 30 years old, Kovalchuk isn't retiring from the sport altogether. Reports are that he will join SKA of the KHL where he will likely recoup the $77 million he left on the table with the Devils. Obviously, this whole situation came as a shock to everyone. And it lead to a lot of LOLing directed at the Devils from the Kings twitterverse.

But is this really a bad thing for the Devils? Sure, it leaves them in a tough spot for the '13-14 season. Yet, in the grand scheme of things, this is beneficial to them for several reasons.

After the dust has settled, Kovalchuk made $23M over 3 seasons. He also cost them a 1st round pick and $250K a year in salary cap penalties over the next 12 years. If this is what it took to sign Kovalchuk in June of 2010, this is what Lou Lamoriello and Dean Lombardi would have looked like trying to be the first one to get to the phone to sign him: 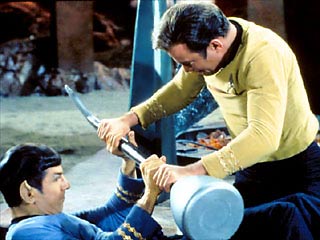 via www.startrek.com (after you follow this link to startrek.com be sure to come back and finish reading this article)

In other words Kovalchuk at 27, earning $23 over 3 years is a much better deal than Kovalchuk at $102M over 17 years. His production had already begun to slide plus players in the NHL generally tend to not to age very well. That's not to say that they didn't get any value out of him during those three years, in fact it's very likely those years were the ones where they were going to get the most value out of him throughout the duration of his contract.

In addition, if he would have retired at 35, the cap penalty would have been $3.5M for 7 years. So that's another bullet dodged. In the end, a team that was really struggling financially got out of a toxic contract and now are likely much more alluring to potential investors.

As far as the upcoming season goes, certainly this doesn't do them any favors. But last year, the Devils were one of the strongest puck possession teams in the league who were dogged by poor goaltending. Kovalchuk wasn't much of a contributor to their possession game and they seemed to have addressed their goaltending problem this off-season by acquiring Cory Schneider.

Now they've lost Kovalchuk, and sure there's nobody out there they can bring in to replace him. But there are some undervalued players left on the market. Namely, Mikhail Grabovski and Dustin Penner. If the Devils, can add 2 or 3 pieces like that this offseason, they could be surprise a lot of people next year-- while also being in much better financial shape in the coming seasons.