As was announced earlier today, Dustin Brown has inked an eight-year contract extension, which will make him ~A KING FOR LIFE~ (or, you know, for the next eight years if he doesn't get traded or injured or retired or whatever). Here is the Kings' official announcement.

The Captain's current deal (with an AAV of $3.175 million) will expire at the end the 2013-14 season, after which he is poised to enjoy a serious pay increase. The financial details of the new extension, which he negotiated himself without the help of an agent:

Dean Lombardi talked to Kings Vision about the contract extension:

Both the team and the player had the usual things to say: integral part of the team effort, opportunity to win, leadership, and so on. 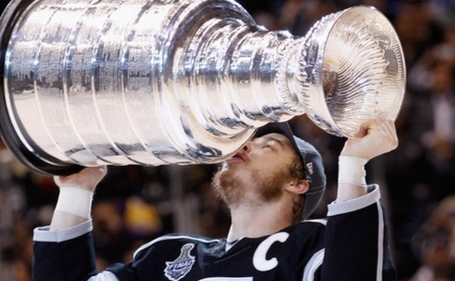 If you'll excuse the sentiment, it's a bit hard for me to be completely rational about Dustin Brown. Not only is he the Captain, he's the longest-tenured LA King, who joined the team during its previous iteration - a much worse iteration - and was a constant, an obvious strength through some pretty bad days for the Kings organisation. His time with the team has meant a lot to me, and I'm sure it has to many of you as well.

For me, that goal was a promise - that there was hope, that things would get better, that finally this team wouldn't be so goddamn frustrating - that we finally saw fulfilled in 2012.

Kopitar to Brown. For the record, that was when I knew. And yeah, I cried. Feelings.

Teams shift and change from season to season, even month to month and week to week, but they still have definite identities and iterations. And Dustin Brown has been the foundation not only for the LA Kings as an organisation, but for this particular LA Kings team. We watched him grow as a person, as a player, as a champion. We watched him try to grow facial hair. We watched the team re-form itself in the image of his best attributes: hard-working, hard-hitting, relentless. Also, the water bottle thing.

This is the only NHL team he's ever known. For many Kings fans, he's the only Captain they've ever known. And when they won, when those years and tears and the frustration just melted away, crystallizing that moment, that image of the first King ever to lift the Cup - well, it's hard to see around that stuff.

But I'll try. For the arithmetically-challenged amongst you, the contract extension holds a total value of $47 million and an AAV of $5.875 million. That is...a lot of money.

I understand the impetus for this contract, the urge to get the team's physical and emotional leader locked in for the rest of his career. He's a good player and sometimes he verges on great. The Brown-Kopitar-Williams line has been one of the most dominant lines in the League, and I suspect it will continue to be a powerhouse for at least the next season. I shudder, frankly, to think what a team like the Leafs would have thrown at him (and what Don Cherry would have had to say about it) had he hit the market. It's not the dollar value or cap hit with which I have a problem, given that the salary cap is likely to raise significantly in short order.

Dustin Brown is 28. He'll be 37 when this contract extension expires. Eight years is a long time in a league with a cap benefit recapture rule for front-loaded deals (thanks a lot, Luongo), and forwards who tend to peak in scoring between ages 24 and 27.

For the extremely arithmetically-challenged amongst you, 28 > 27, and the statistics are pretty clear in showing that we can expect a noticeable and steady decline in points production from here on out. Moreover, physical play is a critical aspect of Dustin Brown's game, and that tends to break down and diminish even more quickly and starkly. I have no idea what a 37-year-old Dustin Brown will look like playing hockey, but he's never going to be a finesse player, and he can only modify his game so much to cope with the speed and durability of the younger players who'll surround him at that point. (It probably won't be too pretty, is what I'm saying.)

That being said, who knows if he ends up playing out the eight years, or whether I will drown the entire continent of North America in my tears if and when Dean Lombardi actually trades him. We can hope for the best, but I'm afraid I don't think we can expect it.

Those are my thoughts. What do you think? Please share with the class.