We graded the centers, now it's time to make our way down the right side of the 2013 Kings' forward line combos. First up, Justin Williams. 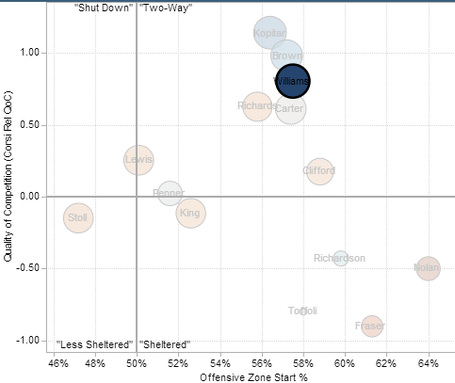 Positives: Look up at the player card and you will see that Justin Williams led Kings' forwards in 9 categories. NINE. That's a lot. Also note that Williams' contract counts for only $3.65M against the salary cap. In addition, he did this while receiving "two way" minutes at even strength. Meaning that although he received a lot of starts in the offensive end, he also faced among the most difficult competition.

It's hard to say which of Williams' numbers is the most impressive. Aside from individual contributions, his on-ice possession numbers were as good as one could ever really expect. In fact, his Corsi rating of 63.3% was the best mark of any forward who had played 500 or more even strength minutes in a season since Thomas Holmstrom and Henrik Zetterberg of the '07-08 Detroit Red Wings (a pretty good squad). What this stat means is that when Justin Williams was on the ice at 5v5, the Kings owned 63.3% of all shots that were attempted. Which in turn just simply means that when he was on the ice, LA had the puck the large majority of the time.

Aside from his ability to drive play, Williams also did his part in attempting to get the puck across the goal-line. He (along with Dustin Brown) registered more shots on goal than anyone else on the team at all strengths. At evens, he also lead the team in shots, as well as points and assists. His shot total wasn't just a byproduct of ice time either, he had more shots per 60 than anyone else.

L.A. got all of this production out of 31 year old winger making $3.65 per year. So when I read rumors like this:

Negatives: One area that Justin Williams really struggled this season was on the power play. Whereas at evens he managed to get 11 shots for every 60 minutes of ice time, at 5v4 that rate fell to 8. In fact, among forwards that got significant time on the PP, his shot production was 2nd worst. His point production was also poor, as he logged the fewest points among any forward with significant time on the power play.

The other area where Williams' game took a hit was shooting percentage. It is now something that has dogged him for quite some time. His sh% at evens over his last 4466 minutes is very low at 6.75%. League average for forwards is 9%. His percentage this season remained low at 7.2%. But, before we conclude that Justin Williams just has little finishing ability, I encourage you to read this article on shooting percentage and regression. Even over many seasons, there is a great deal of randomness involved in shooting. It's very possible that Williams' percentage could improve going forward.

Looking Ahead: The biggest leap his game could make from this year to the next would be being more assertive on the power play. He saw most of his power play time on the 2nd unit this past season so there should be little reason for such a dramatic drop off in his shot totals. In other words, it's not like Jeff Carter is there bogarting all his potential shots.

The other improvement, isn't as much of an improvement but more of an encouragement to keep doing what he's been doing. The shots came this season at a feverish rate, yet the goals lagged behind. If he keeps firing at the rate he has, the goals shouldn't be far behind. If you're a fantasy hockey player, Justin Williams could be an excellent sleeper candidate next year. He might be due for a very productive season as a goal scorer-- if he can stay healthy.

Grade: An easy A. Justin Williams was an invaluable piece of the puzzle in 2013.