Clifford's on the block. Should the Kings keep him? Let's break down his 2013 performance and find out. 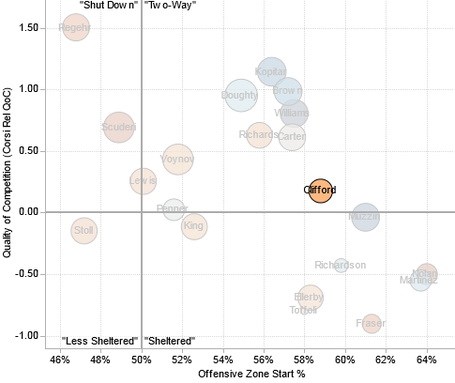 Positives: If you'll allow me to start with a non-statistical fact: Kyle Clifford is a fan favorite. Over his three years with the big club he's endeared himself to all of us in a number of ways. (One significant reason is that he's considerably better than the rest of our fourth liners, but I'll get to that in a minute.) He's physical; his 155 hits on the season were ninth in the NHL and second on the team, and his 51 penalty minutes led the Kings. He fights; his knockout of Roman Polak this season was one of the most memorable punches thrown by a King in quite some time. He scores his share of goals; his seven this year tied a career best, and taking ice time into account, only Jeff Carter was a more prolific goal-scorer at even strength. Plus, as Jon Rosen noted in his evaluation, when the rest of the team struggled mightily at the start of the season, Clifford looked fresh and provided a big boost. The panicked fan response to Clifford trade rumors indicates his positive contributions.

When we look deeper, do Clifford's other numbers back up his goals and his physical play? Comparatively, yes. Clifford got time on a number of lines this season as Darryl Sutter tinkered with his left wingers. The usage chart above shows that he got more trust from the coaching staff than any of his fourth line counterparts; while Brad Richardson, Colin Fraser, and Jordan Nolan are clearly in the "sheltered" boat, Clifford handled tougher competition on average than the rest of the bottom six apart from Trevor Lewis.

His "With or Without" numbers tell an interesting story as well; Hockey Analysis shows how he performed with certain players, and because Clifford got shifts with most of the team this year, we can see how he influenced others. The five forwards he played with the most were the other three fourth-liners and the two second-liners.

The positive takeaway from this chart? Jeff Carter and Colin Fraser performed better with Clifford, though Fraser unsurprisingly dragged Clifford down a bit, and he didn't have any tangible impact on Mike Richards. Clifford's not a permanent solution on the second line, but this does at least show that he's an able second line fill-in. With Penner now in a Ducks uniform, the Kings might need a second line fill-in if Toffoli, Frattin, or King doesn't work.

Negatives: Let's stick with the chart. Jordan Nolan and Colin Fraser were Clifford's most frequent linemates, and while Clifford and Fraser together were all right, Nolan and Clifford together were a bit of a trainwreck. (This could be a bright side if Nolan sits in the press box this season, though, as he was very good without Nolan.) This continued during the playoffs; though Clifford 's Corsi numbers were pretty good relative to his teammates, his line was given advantageous shifts and ended up in their own zone more often than not. Other than Jordan Nolan, Clifford ended shifts in the defensive zone more often than any other forward. Clifford didn't score a goal in the playoffs and was injured for the second straight postseason.

Clifford showed one glaring weakness: he took too many penalties, and wasn't able to draw enough to offset his time in the box. Aside from this, Clifford's overall numbers were satisfactory for a fourth-liner, but we'll nitpick them anyway! The Kings outchanced their opponents this season, but Clifford and his linemates were just able to break even. In addition, though Clifford was really good at scoring goals, he didn't generate as many scoring chances as expected, ranking tenth on the team in scoring chances taken per 60 minutes. For someone who was shooting well all season, you'd expect Clifford to take more shots and get more solid goalscoring chances.

Going Forward: Clifford, of course, is a restricted free agent. He's likely hoping for a raise, one that the Kings can only give him if they demote some current players. A number of solid sources have indicated that he's been shopped around this offseason, with no one offering a sufficient price to the Kings. After his name popped up in Oilers trade rumors, Copper and Blue conducted their own analysis and didn't see what all the hype was about; they correctly indicate that Clifford is ill-suited for a top-six role. However, Clifford seems to be an excellent fourth line option, and for the Kings, any combination of fourth-liners not featuring Tyler Toffoli will need Clifford for offense. At any rate, Clifford has established himself as an NHL mainstay, and if he's back, expect him to hold down a bottom-six spot even with new LW Daniel Carcillo trying to steal his minutes. (What a jerk!)

Grade: Clifford's production and performance relative to his fellow fourth-liners warrants a B from us.