Jeff Carter led the Kings in goals this season. This, we know. So let's look deeper to see how effective he was this year. 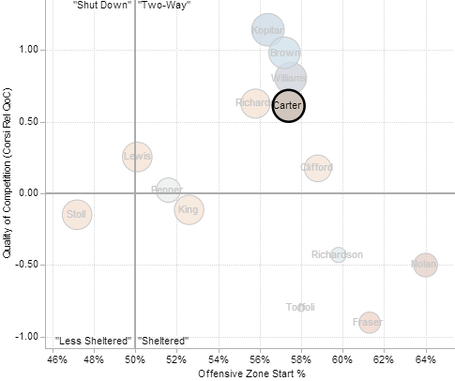 Positives: Let's start with the obvious: goals, goals, goals. Last year's Stanley Cup run overshadowed the Kings' season-long struggle to score goals. Jeff Carter was expected to be the solution to that, and showed flashes during the latter part of the 2012 season. In 2013, he was everything the Kings could have asked for in that regard, finishing fourth in the NHL in goals despite getting second-line minutes for most of the season. He was wildly effective at finding the net both at even strength (third in goals/60 minutes) and on the power play (eight goals on the man advantage, also top-ten in the NHL). The team wasn't starved for goals this season; Carter was a big reason why.

So how did Carter excel outside of the goals department? Observe the scoring chance differentials for the Kings in the chart above. Aside from taking seven scoring chances per 60 minutes (tops on the Kings), the team regularly outchanced their opponent with Carter in the lineup. Carter also didn't shy away from tough competition, regularly taking on the opponent's second line and winning that battle. And this was with all of his games against the Western Conference; we might see Carter feast on some weak defenses next season.

Finally, from simple day-to-day viewing, Kings fans discovered some of Carter's other attributes in his first full season with the team. Backchecking? Excellent. Faceoffs? Solid; he won 52.6% of them this year. Speed? Breathtaking. Defensive positioning? Good. It's enough to want a sniper on your team, but a sniper who can also play defense, kill penalties, and lead the rush? That kind of player doesn't come around very often. Carter was the only player on the Kings to get a Hart Trophy top-5 vote; the possession wizardry of Justin Williams aside, he was probably the only King who deserved one.

Negatives: Blame it on the Kings' stacked forward corps, but Carter actually didn't shoot the puck a ton this year given how often Los Angeles controlled possession. As the go-to player in Philadelphia, Carter was regularly averaging over four shots per game. This season? Not even three. This isn't so much a negative as it is a question: why isn't LA's best shooter (by the eye test as well as the stat sheet) getting his shots? Five players shot the puck at a higher rate than Carter; that doesn't seem optimal.

Additionally, his possession numbers weren't anywhere near as eye-popping as his goal count. The second line drove possession well during the regular season, but they were outperformed by the first line by a significant margin and ended up with slightly below-average numbers relative to the team. The playoffs went much better for Carter and Richards in that regard... thanks, Playoff Penner.

Having said that: when we look at the ten players who spent the most time on the ice with Carter this season, seven of them had better possession numbers with Carter than without him, and his most common linemates (Mike Richards, Dustin Penner, and Kyle Clifford) all benefited from his presence. The bad news? Only two of those ten actually had a better goal differential with Carter, compared to without Carter. We might be able to blame this on bad luck; despite shooting the lights out himself, the team as a whole still only shot 9.5% while he was on the ice, and the goaltenders had a brutal save percentage behind Carter and his teammates.

Going Forward: This is what I like to call the "reasonable expectations" section of the evaluation...

Carter was a 19.5% shooter this season, and a 16% shooter at even strength. That's not normal. The Los Angeles Kings shot 9.3% this year, which means Carter's shots went in twice as often as his teammates' shots did. Carter is an excellent shooter, but given his career statistics, you'd expect his shooting percentage next year to be around 10-12% instead. We got a glimpse of his "state of regression" in the playoffs, when he scored six goals in 18 games with a shooting percentage at 10.7%. Having said all that, Carter is going to be counted on to put the puck in the net, and anything under 30 goals should be a disappointment. With a consistent left winger and a little more ice time, Carter might get more shots, and that would help his cause.

Also, look for him to get more than seven assists next season. THAT is a reasonable expectation.

Grade: It's a clear A for Carter.