Inspired by today's Hockey Hall of Fame announcements, we take a look at Trevor Lewis' 2013 campaign. 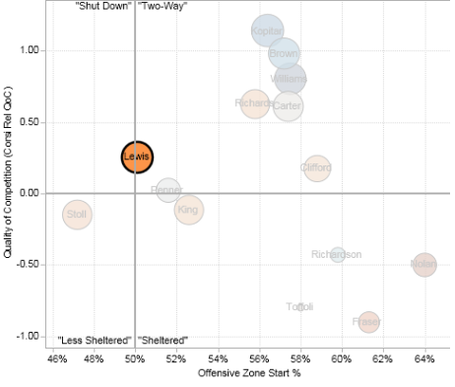 
Positives: Trevor Lewis played a primarily defensive role this season and he excelled in that endeavor. He allowed the third fewest scoring chances on the team (per 60) among forwards while being tasked with arguably the toughest minutes. What Trevor Lewis may be best at is disrupting defenseman as they attempt to breakout of the zone. He often will use his speed to pickpocket or disrupt passes and make breakouts a nightmare.

Offensively, he is quite conservative as he chooses to dump the puck in more often than not and hardly ever turns the puck over on entry. I think he may be a little too conservative in that regard because he does seem to have some offensive talent. He actually had the 4th most shots at even strength among Kings' forwards and took the 5th most scoring chances. He has been hampered throughout his career by a lack of finish, but at some point goals will start trickling in if he can keep creating opportunities. I mean, he'll never be Jeff Carter or Alexander Ovechkin, but his career shooting percentage of 3.9% seems unsustainably low.

In addition, he ate up a lot of time on the penalty kill (second only to Jarret Stoll). On the kill, he performed reasonably well as he allowed the 3rd fewest shots (per 60) among penalty killers.

Negatives: Trevor Lewis' biggest fault seems to be his hands...or lack there of: 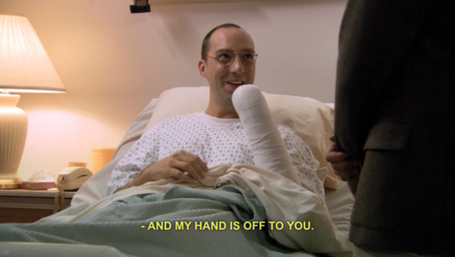 He has a difficult time getting the puck past the goal line. In fact, over the last four years at even strength, Lewis' shooting percentage is an absurdly low 3.75%. That is 3rd worst in the NHL, ahead of only Scott Gomez and Craig Adams.

When he was on the ice, the Kings did manage to drive play slightly better than the opposition. Yet, the way he and his line-mates did that was through repetitive dump and chase hockey that sometimes made the viewer feel like s/he was stuck in an elevator with a traffic school instructor...AKA bored out of their minds:

Sure, they won a lot of games this year and had another deep playoff run. So, it's easy to make the "if it ain't broke don't fix it" argument. But, is it wholly necessary for the third line to play such a conservative brand of hockey? Couldn't they afford to open up a tad and carry the puck into the zone every once in a while in the hopes that they might increase some of the offensive output of the bottom six rather than just relying on them to eat up time on the clock?

Looking Ahead: Trevor Lewis is still an RFA and his qualifying offer sits at $735,000. He'll undoubtedly be brought back at an amount close to that. It's unfortunate for Lewis that none of things he does well are reflected in traditional statistics and thus seems doomed to make slightly less than his true worth.

That being said, his insanely low shooting percentage seems due to improve. If it does, the Kings could find themselves getting excellent value out of Lewis in the coming years. They could also increase his value by playing him along side some more offensively talented players. Lewis is adept at pressuring the puck and forcing turnovers. That skill is somewhat squandered by being lined up next to Dwight King and Jarret Stoll (who has focused more on defense in recent years).

Grade: C. Lewis was very sound defensively but was a bit too one-dimensional. LA is going to need more secondary scoring going forward and players like Lewis are going to need produce a little more in that regard.