We've taken a couple weeks to recover from the shock and devastation of Dustin Penner's departure. It's time for... an evaluation. 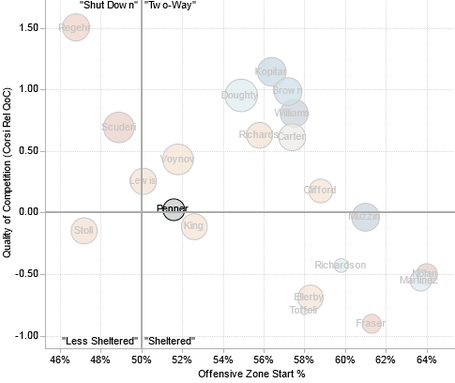 Positives: Playoff Penner did it again this year! Granted, his performance wasn't as good as last year's $3 million showing on the way to the Stanley Cup, and he only notched five points in 18 games. But out of respect for the departed, we're spinning this as a positive, and I don't think anyone who watched him in the postseason can quibble. Penner's underlying numbers back up the assertion that he was a new player during the playoffs. He had the best possession numbers of any King aside from Tyler Toffoli and did it without the advantageous zone starts that Toffoli had. The Kings also were stingy on defense with Penner on the ice, allowing just one even strength goal while Penner was on the ice in eighteen games. That's right, one. Oh, and he scored three goals, and for the second year in a row, one of his goals was a series-winner. Not bad.

However, this is a full-season review, and yes, there were some positives for Penner this season. He notched 12 assists in 33 games, though you can chalk some of that up to Jeff Carter. He was one of the team's better possession players when he was on the ice, despite (again) receiving relatively few offensive zone starts. His lines did well in the shots department and the scoring chance department, and even Penner himself tested the goalie pretty often, ranking 4th on the team in shots per 60 minutes.

Negatives: This section is going to be very straightforward.

First of all: Penner played 33 games. Colin Fraser and Jordan Nolan played more, and when you're being paid like Penner was, you should get into more games than the guys who might play nine minutes per game. Yes, he was injured for four of them near the end of the season, but his absence from the lineup at the opening of the season was glaring. Sutter did let him play every game during the playoffs, but what were the odds of him playing 82 games if he'd come back to Los Angeles again?

The other negative: goals. Two of them, in 33 games. This was his third straight season with a terrible shooting percentage, and whether or not it's bad luck, he clearly wasn't playing to his offensive potential this year. Penner's struggles to score took away most of the goodwill he got in last year's playoff run, and while he got some of it back, it wasn't enough to keep Penner around. There were some other aspects of his game that could have used improvement (he took too many penalties, could've hit more, etc), but everything was secondary to the goal struggles.

Going Forward: Dustin Penner signed with the Anaheim Ducks. Is he going to get better linemates than Mike Richards and Jeff Carter? Probably not. Is he going to get more ice time? Probably. I'd expect his goals to go up, and his assists (1 every 3 games) to go down. Either way, it'll be interesting to see if he finally returns to form next season.

Grade: It's a C, but Penner certainly had his moments. Sorry, Kings fans, you won't have Dustin to kick around anymore.