His departure was overshadowed by Rob Scuderi's signing, and the Kings have (approximately) 20 potential fourth-line replacements for him. But we'll give Brad Richardson his due. 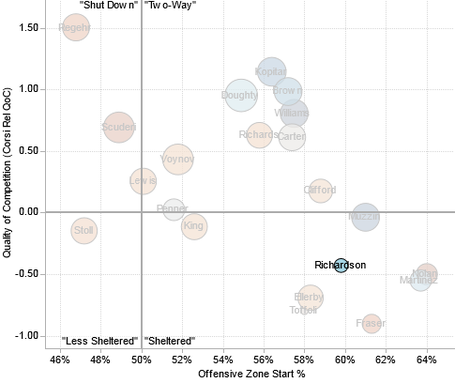 Positives: You'll notice that Richardson only played 16 regular season games. However, this included the final 14 games of the regular season, meaning he was a regular presence during the crucial April stretch run. Richardson has been a consistently great possession player for the Los Angeles Kings in the last few years, and 2013 was no exception. As you can see from the blue circle above, Richardson was above-average in the Corsi department. Though he spent most of his time with Jordan Nolan and Kyle Clifford, he did pretty well in his mostly-sheltered time on the ice. You can compare to Colin Fraser, who lost the most playing time to Richardson in that final month; Fraser was considerably worse at driving the play than Richardson despite getting better zone starts and facing weaker competition.

Oh, and bonus points to Richardson for helping his teammates. His five assists aren't impressive on paper, but he did it in just over 160 minutes of game time, and as a result his overall scoring rate at even strength was second-best on the team behind Justin Williams. Another plus is his (and long has been) his ability to draw penalties, and he ranked third on the team in doing that. His speed and energy caused problems for the opposition in a number of situations.

He also found his way back into the lineup for the final 11 games of the playoffs, and during those final 11 games, it was no surprise that he posted good Corsi numbers while anchoring the fourth line. He scored just one point, but the fourth line improved immediately upon his insertion into the lineup. For a team which has lacked fourth-line speed, the contributions of Richardson and Tyler Toffoli were noticeable even when they occurred against the other team's weaker forwards. Richardson's performances in April and May were pretty consistent, and Robert regularly noted in his postgame evaluations that Richardson and his linemates were either controlling the play or treading water with no big issues. On the fourth line, that's a good thing.

Negatives: Richardson chipped in his share of goals as a King, including some notable playoff tallies and an unlikely hat trick in 2010. However, his goalscoring suffered this year in a big way, as he notched just one goal in 27 total games. As useful as energy and speed can be on the fourth line, you still want to see the occasional goal. ("Corsi doesn't show up on the scoreboard!", screamed the old-time hockey writer.) Though he made up for it in the regular season with his assists, his scoring dropped off in the playoffs along with the team's.

Also, though the Kings did well in the shot department with Richardson on the ice, they were not necessarily getting shots in good areas. Note the scoring chance differential, which was third-worst on the team; LA allowed their opponents too many chances with Richardson on the ice, so his play in the defensive zone after losing the puck left something to be desired. Fortunately for Brad, the goalies were excellent behind him. In addition, another positive contribution by Richardson (his penalty-drawing ability) was canceled by a negative (his penalty-taking, which also ranked third on the team per 60 minutes).

Going Forward: Richardson was as good a 13th forward as the Kings could have hoped for over the past couple seasons. He'll get a chance to be a full time regular with Vancouver, who got rid of seemingly every depth center they had (Bye, Derek Roy! Get out of here, Maxim Lapierre! Hahaha, yeah right, Andrew Ebbett.) and needs plenty of help down the middle.

Grade: His good possession numbers were offset by a lack of goals, but we'll give him a B for exceeding expectations and general consistency.