Next up on our rundown of each Kings' contribution to 2013...the one you've all been waiting for...Mr. Excitement himself...Deeewight Kiiiiiiiiiing!!11! 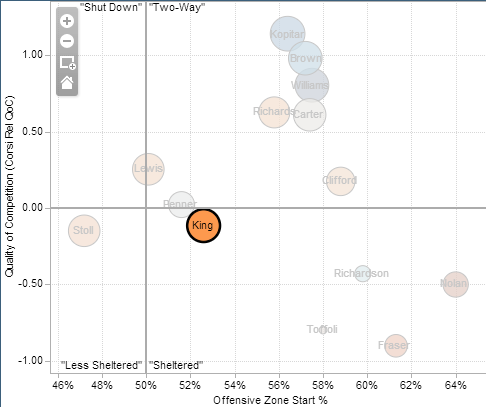 Dwight King was a human highlight reel in 2013. When he wasn't scoring goals, he was wowing fans with his silky smooth skating ability and charming them with his million dollar smile. Ok, not really. King saw most of his time as a third line grinder. His primary role was to muck up the ice to such a degree that as little happened as was possible. He largely succeeded in that endeavor.

In addition, King played a very disciplined game. He drew more penalties than he took. In fact, he took the fewest penalties among forwards on the squad. Not bad for a man of his stature.

The team really struggled to produce very much offensively when he was on the ice. One of the reasons for this could be that he dumped the puck in at such an incredibly high rate. King's first reaction was to dump the puck in any time the puck touched his stick in the neutral zone.

He may have just been doing as he was instructed by the coaches, but nevertheless giving up control of the puck at such a high rate is not an optimal strategy. At some point in his career King is going to have to be able to confidently handle the puck in the neutral zone.

He recorded the lowest points per 60 among forwards at evens, the 10th fewest shots and the 11th fewest scoring chances. All this while also benefiting from the 6th best offensive zone start percentage and while facing among the easiest competition on the team.

King was good at not giving up anything to the other team, but he also played a part in preventing his team's bottom six from producing goals.

King will need to focus on maintaining his ability to cut down on offensive opportunities for the opposition while also opening his game up so that the team can get more from their depth lines. If he can't contribute more from an offensive standpoint he is destined to be not very much more than a very solid 4th liner.

King's effort in 2013 earns him a C in our book. Although he did well in his own zone, it was to the sacrifice of secondary offensive output. Furthermore, his ability to deny shots and scoring chances is made less impressive by the fact that he faced relatively weak completion while also receiving copious offensive zone starts.