It wasn't easy, but we stopped drooling over Tyler Toffoli's talent long enough to take a balanced look at his accomplishments and shortcomings this season. 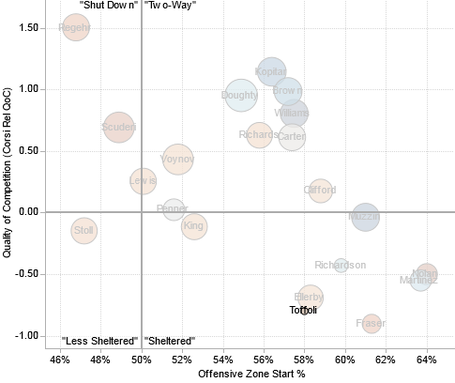 Positives: Before we dig into the numbers, a quick recap of Toffoli's whirlwind season. Tyler Toffoli's big NHL debut came on March 16 after a Rookie of the Year-caliber AHL season. With the Kings only four points ahead of ninth in the Western Conference, Toffoli wasn't going to get a very long leash if he looked overwhelmed. Toffoli looked decent in an easy Kings win against the San Jose and scored his first goal against Mike Smith (ha!) in game #2. However, after five points in six games, he hit a brief dry spell and got sent down to Manchester.

"That kid's got some sick hands, doesn't he?"-Darren Pang

When he came back up in late April, he stayed, and at times he looked like the best player on the ice. His backchecking was impressive and his awareness was good for a 20/21-year-old, and he fit in pretty well on the Kings' #2 power play unit. His four goals over the course of the season all showcased his natural skillset: a rebound put top shelf against Phoenix, the quick wrister against Chicago, the backhand off a turnover against San Jose, and the chop of a bouncing puck against Chicago. And don't forget the quick rush that set up the Trevor Lewis game-winner in Game 2 of the second round. But looking beyond the hands (which are, yes, divine), what did the stats say?

Obviously, the scoring was welcome, as the rookie averaged a point every two games during the regular season and the playoffs. He saved his best for the eventual Cup champs, with five points in five games against Chicago.He was good at putting shots on net (third-most prolific shooter on the team), and since he also ranked third in scoring chances taken, he wasn't just throwing the puck towards the goalie. The team as a whole generated numerous scoring chances at even strength with Toffoli on the ice. His overall Corsi numbers weren't outstanding, but in his ten regular season appearances, his relative Corsi was -1.0, meaning he was just about in line with the team's overall performance. If his shooting percentage goes up (and it almost definitely will), expect the goals to follow.

(He also had the highest PDO, or on-ice team shooting percentage plus on-ice save percentage; AKA, he was technically the luckiest player in terms of goals scored and allowed while on the ice. If you subscribe to the theory that you make your own luck... Positive!)

Negatives: Even the best rookie season has growing pains. (Just ask Yasiel Puig.) Tyler Toffoli was no exception, despite impressing the critics. For example, the eye test saw him experience some issues on the defensive end. The backchecking is great and all, but Darryl Sutter will want to see him in good defensive position more often so he will resort to desperate backchecks a little less often.

Toffoli also had to make the usual adjustments to the increased speed of the NHL, and given the likelihood of lineup shuffles this season, Toffoli's going to have to figure out how to contribute if he doesn't get to play with Mike Richards and Jeff Carter (his two most frequent linemates) as much this year. Toffoli also did drag down Richards and Carter in their time together. Again, they didn't exactly suck together and you can chalk it up to small sample size if you'd like, but Carter and Richards barely broke even in shot differential with Toffoli on the wing despite winning the goal differential battle handily.

Speaking of shots, you can see by the ranks that Toffoli's underlying stats suffered despite relatively easy competition and despite starting in the offensive zone pretty often. In that respect, he's way behind guys like Dustin Penner at the moment. But that's why the playoffs were so impressive. His Corsi looked much better in the postseason; easy to see why he earned rave reviews, as the Kings dominated with him out there. And while he didn't draw a single penalty during the regular season, he drew three at even strength during the playoffs.

Going Forward: Toffoli could end up on the second, third, or fourth line to start the season, and it's not out of the question to see him on the top line if Sutter wants a spark. Toffoli also is the only current NHL player who can be sent down to the Manchester Monarchs without penalty, so his spot isn't guaranteed by any stretch of the imagination. Having said that, expectations will be high. The kid is a legitimate Calder Trophy contender, and the playoffs put him on the NHL's radar.

(Maybe he'll even make the Sports Illustrated cover in a more flattering pose.)

Grade: A B for the new guy, who certainly has room to improve but provided a huge spark to the Kings this season.

With that, our evaluation of the Kings' forward corps is complete! Next up, the defensemen, starting with Drew Doughty. Check out all of our reviews here.