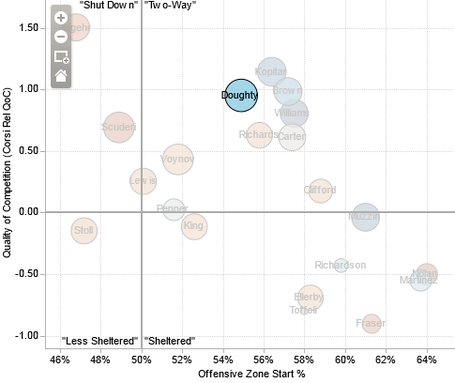 Positives - Drew Doughty has been one of the best defensemen in the game for some time now, and nothing changed in 2013. Although he had a slow start to his season, he regained his footing to be one of the elite play drivers in the entire league. When he's on top of his game, Doughty is one of the absolute best players in the league at escaping his own zone. His ability to skate the puck out of danger and connect a tape to tape pass with someone either escaping his own zone or entering the opponent's zone is paralleled by few-to-none in the world.

He continued to be an excellent possession player this past season as well. The fact that his Corsi On rating doesn't lead the team's defense is a testament to the depth of the team and is absolutely not a slight against Drew. Alec Martinez is ahead of him! Go figure. Although Sutter does get him a bunch of offensive zone starts, he still faces the best players on the other team with regularity. As you can see, only Dustin Brown, Anze Kopitar and Robyn Regehr draw tougher competition than Doughty.

Although he didn't score until game 29 against Phoenix, Doughty ended up potting 6 goals. Poor 5v5 shooting luck can account for most or all of his scoring woes. His goal total dipped in spite of registering a career high in shots/60 at full strength. Unfortunately, he registered by far his lowest career 5v5 shooting percentage.

There is basically zero question any more about Dewey's defensive ability. While other offensive minded defensemen receive criticism for their defensive lapses, Drew continues to shut down the other team's best players. The Kings are one of the best defensive teams in the NHL, and Doughty leads the way. He rarely winds up out of position, but when he does, he uses his excellent instincts and diffuses the play through some other means. How many times have we seen Doughty slide on the ice and break up a rush with a pokecheck? While you'd rather he not wind up in that position, he never gives up on a play. His effort level on the ice deserves the utmost respect.

Negatives - Doughty started the year slow. Again. He has done this for three consecutive seasons. It's a worrying trend. Fortunately, unlike two seasons ago, he showed up to camp in shape. He also didn't have any contract issues to keep him from training camp. However, with no preseason and an abbreviated camp, it was impossible for a majority of the league to be in 100% game shape. Doughty was no exception. On top of that, the Kings wound up in the unenviable position of having two starting defensemen go down for the season before it was a game old. He wound up logging a career high in Average TOI (in a year with a compacted schedule, no less), and it seemed to wear on him early in the season.

(At the bottom of this interview, Dean Lombardi comments on Drew's early season play)

One area of Doughty's game that lagged was his playmaking. His assist rate at full strength this season was considerably lower than seasons past (refer again to the image above). Some of this can be attributed to a smaller sample size. Hopefully over 82 games his rate would have normalized. However, because his sample is small (although his rates remained low in the playoffs as well), we have nothing to do but show a little bit of concern. It's hard to imagine that Doughty suddenly forgot to set up a goal. However, perhaps the previously mentioned increase in his shooting rate could apply here. Maybe because he shot the puck more, he set plays up less. Hard to say. Slightly troubling, but little more than that given the size of the sample. Something to keep an eye on next season.

Going Forward - Doughty is the Kings' best defenseman. He will be for a long time. It will be interesting to see if his increase in shooting keeps up next season. If it does, expect his goal total to climb. It could even go back to 2010 levels based purely on shot volume. I fully expect Doughty to contend for a Norris at some point in the near future. He's certainly talented enough to win it right now. The only question is whether he can put it together for an entire season. If he can get out to a strong start and get that goal total elevated a bit, expect his name to be mentioned for the Norris in 10 months time. Oh, also, he's probably going to go dominate the Olympics again. No big deal, I guess.

Grade – A. Doughty logged a ton of tough minutes as the Kings tried to figure out which mediocre defenseman was better between Davis Drewiske and Keaton Ellerby. Then the Kings made him play with Robyn Regehr. Truly a season of trials and tribulations. I suspect his low-ish point totals will make some of you fine people grade him lower than me, and I understand. Let me offer a quick counterpoint though: you're wrong. Go Kings!