The much-maligned defenseman played with Drew Doughty this season after coming from Buffalo. How'd he do? Let's review! 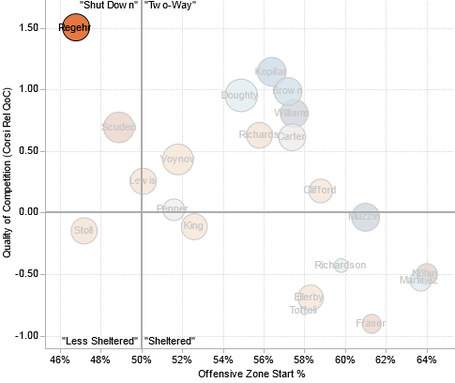 Positives: We at Jewels from the Crown weren't too optimistic about the new guy after Dean Lombardi acquired him from the Sabres for two second-round picks. However, Regehr exceeded expectations in a few departments. His possession numbers improved considerably from his stint in Buffalo. It was bound to happen, given that he was moving to a much better possession team, and that his numbers had already taken a turn for the better before the trade. Even so, despite some individual issues (we'll look at those in a bit), the team's overall performance didn't really suffer. From Robert's look at team numbers on April 30:

In [Regehr's] 12 games with the Kings their possession number has been 54%. In the twelve games prior to Regehr's arrival, they were at 55%. So if Regehr's presence has had a negative impact on team possession numbers, the impact seems to be a marginal one.

He also brought what we primarily hoped he would bring: physical play. Regehr racked up 35 hits in 12 games; over a full season with LA's generous hit counter, that would have put him second among defensemen in the Western Conference. As it was, his total of 100 hits was good for 23rd in the NHL. Pairing him with Drew Doughty fit the Kings' preferred modus operandi of using one offensive defenseman and one defensive defenseman in each pairing, and allowed Doughty to roam the offensive zone a bit more than he did with Jake Muzzin. The move also gave Rob Scuderi (who largely struggled this season) the opportunity to stick with Slava Voynov and get on the ice less.

Robert's scoring chance data also gives a favorable view of Regehr's defensive ability. Regehr ranked third among defensemen in scoring chances allowed; though the team didn't do a whole lot offensively with Regehr out there, they were able to limit opponens' opportunities. It was no surprise that Regehr got the team's toughest minutes during the playoffs. And, as Jon Rosen pointed out in his evaluation, Regehr had his share of good games, especially against San Jose. When the Kings struggled mightily to score against San Jose, some strong performances by the Doughty-Regehr pairing helped LA eke out Game 5 and Game 7.

Negatives: We can't rely entirely on Regehr's numbers, but it's a good starting point to break down his issues this year. Regehr's individual possession numbers were pretty dreadful compared to the team's numbers; his 51% Corsi For over his 12 regular season games still would put him last on the team over a full campaign (aside from Matt Greene, who came back from injury and played just five ineffective games). And of course, there's the beating-a-dead-horse point: though Regehr-Doughty was a net positive in shot differential, Regehr certainly dragged down Drew Doughty in their time together. Robert?

Regehr did get a slight boost from Doughty, but not a significant one; I guess this is somewhat positive, in the sense that he didn't drag others down quite as much. In playoff time, we can't really pin down Regehr's effect on Doughty, but the numbers again don't look positive for Regehr. No points, lowest Corsi, lowest Goals For/60, so on. In other words: the Kings shot and scored less with Regehr on the ice than they did with any other defenseman. The team laid an egg against Chicago, and it's silly to pin a significant share of the blame on Regehr. But boy, it got ugly there, didn't it? Patrick Kane and Jonathan Toews took it to the Kings' top pair throughout the series, and no stats were necessary to see that. After a good performance against San Jose, Regehr got overwhelmed a bit in the Western Conference Finals.

Going Forward: Not many defensemen have been fortunate enough to skate with a player like Drew Doughty. The other defensive blueliners on the team are Willie Mitchell (an ideal partner for Slava Voynov in 2012), Matt Greene (who Darryl Sutter loves on the third pairing), and Keaton Ellerby and Jeff Schultz (who aren't about to steal Regehr's playing time). In other words, unless something crazy happens, get excited for the continuing saga of Regehr-Doughty. Regehr gets a full training camp to continue adjusting to his team, and his performance will be evaluated by both his own play and the play of Doughty. If Doughty contends for the Norris again, Regehr's done his job.

Grade: The possession numbers were ugly, but his play in tough situations offered enough bright spots for the coaches to keep him on the top pairing and for fans to approve his re-signing. We'll give him a C... and we'll be very interested in how he looks in a full season out West.