In shocking news, Jake Muzzin had a good rookie season. You should totally read this because it backs up that opinion you already had with actual, like, statistics and stuff. Also if you don't Jake Muzzin will cry and he is too adorable to cry. 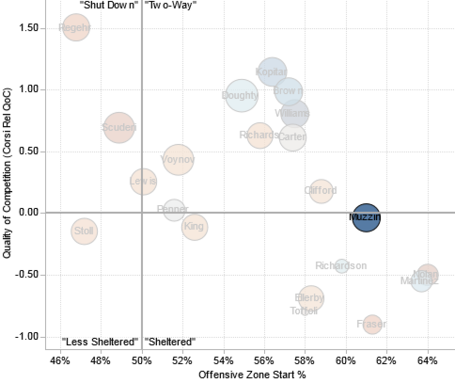 All the smart people here at Jewels were busy, so you got me doing my first player eval instead (please be gentle). Let's talk about Jake Muzzin, who I personally have a soft spot for due to all the Muzzy references he let me make on Twitter this season. Learning about Jake Muzzin's strengths and weaknesses becomes fun! Sorry, no CODs.

Positives: Jake Muzzin came virtually out of nowhere last season to play huge minutes for the Kings blueline, which would sure seem like a big 'ol "positive" to me. While he received the proverbial cup 'o coffee in the NHL back in 2010-11, scoring an assist in eleven games, entering 2012-13 he had the same number of National Hockey League goals as you or I have (unless you the reader have scored an NHL goal of course, in which case OMG OMG FAMOUS PERSON READING ME ON THE INTERNETS!). He had a 34-point season with the Manchester Monarchs of the AHL in 2011-12 and had scored 11 points in 29 games to start his 2012-13 Manchester campaign, before suddenly finding himself in NHL action due to the Kings' well-discussed injury decimation of their blueline. He went pointless in his first two games, Jan. 22nd at Colorado and Jan. 24th at Edmonton, before suddenly breaking out for a goal and an assist in Phoenix on January 26th. And although he wouldn't score a point in his next ten NHL games, it proved to be a harbinger of things to come for young Muzzin, as he would eventually amass a surprising 7 goals and 9 assists in what was essentially his rookie campaign. Not bad for a guy who you may or may not have remembered existed before the season started.

His points per game actually ranked third among all Kings defensemen last season, although that was helped by having the highest shooting percentage among all of them (as you can clearly see from the Player Card 5000, which is a name I just made up). If you'll look over to the Usage Chart 800, you can see he got a great deal of offensive zone starts, with more than 60% coming there. But his quality of competition was dead even, behind most of the Kings blueliners but well ahead of Alec "I shot Darryl's dog once, apparently" Martinez and Keaton "He gets no nickname because I'm still bitter about having to write about him" Ellerby. And when partnered with Drew Doughty, Muzzin shined, playing up-tempo hockey and frequently attacking the opposition zone. His on-ice Corsi was second on the team, behind only Justin Williams and ahead of all other Kings blueliners, and Drew's numbers were much higher when paired with Jake than with our resident pinata Robyn Regehr. Simply put, he made players around him better.

Weaknesses: But those zone starts tell a tale, and that tale is called "The Tale of Darryl Sutter Preferring Mr. Regehr (For Some Reason)". While this is hardly his fault, it's undeniable that Muzzin was sheltered with, again, over 60% of his zone starts coming in the offensive zone. Sutter just didn't trust the rookie defender to line up in the defensive zone, especially late in games, going with the veteran Regehr instead. Going forward, Muzzin needs to do what he can to earn the trust of his coach and greater responsibility in the defensive end. Perhaps some of that will come irregardless of what he does, just from ditching that pesky "rookie defenseman" tag.

Also, it should be noted that Muzzin struggled later in the year and especially into the playoffs, which is perhaps to be expected for a rookie blueliner. But he couldn't find the consistency that marked his game early-to-mid season, with a few gaffes in his own zone certainly not helping Darryl Sutter get past his trust issues. Muzzin will need to find more consistency, especially in his own end, moving forward.

Remember how we just said his shooting percentage was the highest on the team for defensemen? Ya that's cool and all but that also means those 7 goals he had might have been a bit of a blip. In another words, if you're penciling him in for 12-14 goals next year, you might wanna dial that back a bit to more like 8-10. Maybe he's just going to consistently shoot around 9.1%, but I kinda doubt it. This will also come as less-than-shocking news to you if you know what PDO means, but the guy with the highest shooting % of all Kings blueliners had the highest PDO of 'em all as well. He got a bit lucky folks, that's all I'm trying to say here. Someone should take him into the Bellagio around Frozen Fury time and see if his luck is still going. Maybe he can win you a new pair of shoes, which those who father children seem to need an awful lot!

Other than that, it's tough to find much to complain about for a rookie blueliner who lead the team in on-ice and relative Corsi. He had a great, if at times uneven season, and will just have to focus on building on it from here.

Going Forward: Muzzin will need to avoid the dreaded sophomore slump, but luckily that doesn't really exist and you just think it does because of confirmation bias, so he's got that going for him at least. Moving forward, he needs to show more consistency, especially in his own zone, if he wants to earn the trust of the strange-faced man who sends him over the boards. For all of our sake, here's hoping he does that and we can see more Doughty & Muzzin and less Doughty & That Guy No One Likes. Or he'll get thrown in the press box to play tic-tac-toe with Alec Martinez and we'll see Drew partnered up with Jeff Schultz this season, who the hell knows.

Grade: He was mostly awesome and a rookie and he came out of nowhere. I'm having a hard time giving him less than an A- here. Now have your say in the completely unscientific poll, and back up your grade with facts & statistics wildly speculative opinions in the comments!