Alec Martinez comes into training camp in roster limbo. Where does his play last year put him on the defensive pecking order? 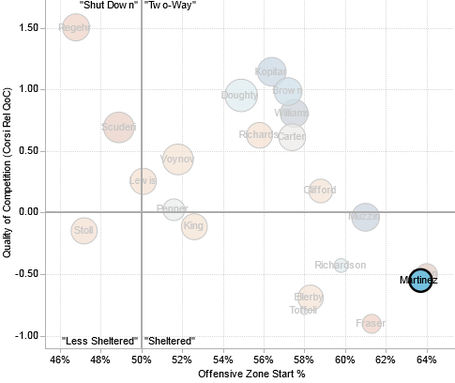 Positives: Alec Martinez has become a favorite around these parts. Secondary reasons include the day he wore a sombrero to practice, his go-ahead goal in Game 3 of the Stanley Cup Finals, and his propensity for being benched in favor of more despised defensemen. (Whether or not that will continue at the start of this season is anyone's guess.) But the number one reason has always been Alec's incredible puck possession figures. Martinez is seen as one of the most offensively gifted defensemen on the Kings, and when paired with Darryl Sutter's tendency to start him off in the offensive zone, the Kings usually control the play with Martinez out there. This year was no different, as Martinez posted the second-highest Corsi among Kings defensemen.

(But wait, he was tops in 2010-11 and 2011-12. The difference this year? Jake Muzzin stole his thunder, and did it with slightly tougher minutes... though Drew Doughty's presence probably helped him out a tiny bit.)

The positives aren't quite as strong once we leave that neck of the woods. The Kings did a reasonably good job of generating scoring chances with Martinez on the ice, and that was with his main partner Matt Greene was out for most of the season. A-Mart's time was largely split between Keaton Ellerby and Slava Voynov, and though his time with Voynov was unsurprisingly more effective, he was a boost to Ellerby when they paired up. No matter who Martinez is paired up with, you can expect that it won't be a disaster... which, yeah, is a positive.

It's also worth noting, that after a long stretch out of the lineup, Martinez returned to the lineup in Game 3 of the St. Louis series. The Kings proceeded to win four straight games. It might be a coincidence, but he was certainly better in the playoffs than he was throughout most of the regular season. The playoffs also demonstrated that Martinez is a really beneficial asset when Darryl Sutter rolls seven defensemen. He doesn't need to take on heavy defensive responsibility and remains dangerous in the offensive zone.

Negatives: When your role is to create offense, you can't go 27 regular season games without a single even strength point (all five of his points came on the power play). Worse, Martinez paired his offensive struggles with mediocre defensive play; he was beaten one-on-one more often than he should have been, and when he returned from an upper-body injury in March, the issues in his game got worse. Martinez found himself on the bench when Robyn Regehr came to town, and it wasn't until the playoffs that he got a chance to prove he belonged. Martinez did enough to earn a contract extension, but his ice time dropped dramatically; he got 19 minutes/game before his injury, but didn't come close to that afterward. He was also replaced on the PK by Regehr.

Long story short, Martinez played against the same (comparatively) weaker competition and started off in the offensive zone just as often as he did in past seasons, but the production wasn't there. This is one of those instances where Corsi and shot differential don't quite tell the story. Sutter wasn't pleased with Martinez, so it's a good thing he's supposedly in great shape and more ready to "compete."

Going Forward: Compete? You bet. Martinez is facing off against Muzzin, Ellerby, and Jeff Schultz for the coveted #6 spot on D. The Kings are looking to start the season with eight defensemen; that's great news for Martinez, who is more highly paid and has more Los Angeles experience than any of his competitors. Muzzin has the inside track on that spot, but considering Muzzin's end-of-season struggles and Alec's familiarity with Matt Greene, Martinez also might be the safest pick of those four. He's gonna have to win the spot, though, and a bad camp could see Martinez heading out of town.

Grade: Martinez appeared to have locked down a place on the Kings with his 2012 performance, but his 2013 struggles put him on the bubble. He gets a C.