What do you all want out of a 7th or 8th defenseman this season? Is it what Keaton Ellerby provided last season? Let's take a look. 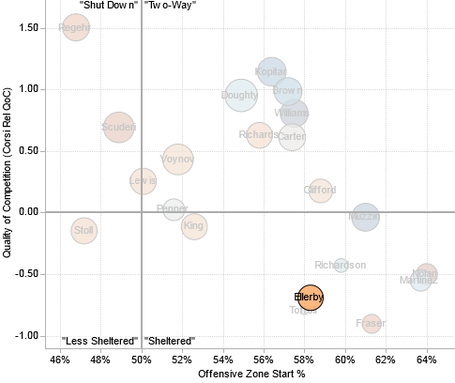 Positives: If we'd like to praise Keaton Ellerby this year, it'd be best to start with the situation he was thrown into. Ellerby was acquired back on February 8 as the Kings' back line stuggled with injuries. Between his acquisition and Matt Greene's return on April 18, Ellerby played in 34 consecutive games. During that time, he was largely paired with offensive thrillers/defensive killers Alec Martinez (pre-Regehr) and Jake Muzzin (post-Regehr), with some Drew Doughty thrown in for good measure. (You can see his ice time with specific players here.) Ellerby's job was to hold down the back and not screw up in the offensive and neutral zones, and generally, he did that. For a guy who came in midseason with little preparation and low expectations, that's pretty acceptable.

So, in what specific areas did Ellerby show promise? Well, Ellerby's possession numbers were decent, if unspectacular. In particular, the Muzzerby pair (which wasn't all sunshine and rainbows, keep reading) did really well in the Corsi department. With those two on the ice, the Kings were generating over 60% of the total shot attempts and keeping the puck in the offensive zone. His efforts at goal prevention and scoring chance prevention were decent, and in most other areas, he was decidedly average (see the player card above).

The "DO YOU EVEN WATCH THE GAMES" section of the positives: despite Ellerby's clear role as the stopper on his defensive pairing, Ellerby showed some flashes of ability on the breakout. It was a little bit maddening to watch Ellerby make crisp, on-the-money passes coming out of his zone and then look confused on the next possession, but hey, room for improvement. If Ellerby can get more consistency in that aspect of his game, there will be few qualms about throwing him into the lineup. Ellerby also did a decent job on the penalty kill and showed a willingness to be physical.

Negatives: Actually, the above sentence should've started, "Ellerby also did a decent job on the penalty kill when he wasn't in the box." Because Ellerby's biggest issue this year was taking penalties. At one point during the season, Ellerby was taking penalties at a higher rate than any other defenseman in the NHL. In fact, by season's end, Ellerby had the highest penalty rate (1.4 penalties taken per 60 minutes) than any D-man with at least 40 games played. For someone who was starting in the offensive zone so often, that's pretty discouraging. Thankfully, Ellerby showed vast improvement in this department, taking only two minor penalties in his final 21 regular season games.

Ellerby faced the easiest competition of any Kings defenseman this season. Note that he also played his minutes with the three defensemen who consistently had great shot metrics. Given that, you'd hope Ellerby would have better shot metrics himself. But he was held back by a tendency to turn the puck over, and when paired with Jake Muzzin or Alec Martinez, committing a turnover is often going to lead to a goal the other way. Fortunately for Ellerby, he's only 24 years old, and after building some familiarity with the team in 2013 and at training camp, we might see a more consistent Ellerby this year.

We should also mention Ellerby's playoff performance. He saw the lineup when Sutter dressed seven defensemen and wasn't dreadful, but he clearly became the odd man out and didn't get the chance to contribute much after the first round.

Going Forward: I'm glad we waited so long to do this evaluation, because Keaton Ellerby's role this season has surely been solidifed at this point...

Keaton Ellerby remains one of the nine NHL defensemen on the Kings' roster. The consensus has been that Jake Muzzin had the best shot at the 6th defensive spot, but considering recent quotes from Darryl Sutter, we can't totally rule him out.

At the very least, Ellerby appears to be ahead of Jeff Schultz, and with the Kings looking at carrying eight defensemen to start the regular season, he will likely be on the opening night roster even if he heads to the press box. Considering his defensive role, if Mitchell, Greene, or Regehr have any injury issues, Ellerby will likely be the first to fill the vacancy. Having said that, Ellerby only got a one-year contract after not receiving a qualifying offer, and Derek Forbort is on the way. He will need to impress to stay past this season.

Grade: For a 6th/7th defenseman thrown into a regular role, he performed to expectations. C... just cut down on those penalties, yeah?

Bonus: Keaton Ellerby is arguably playing hockey better than anyone else in this photo. 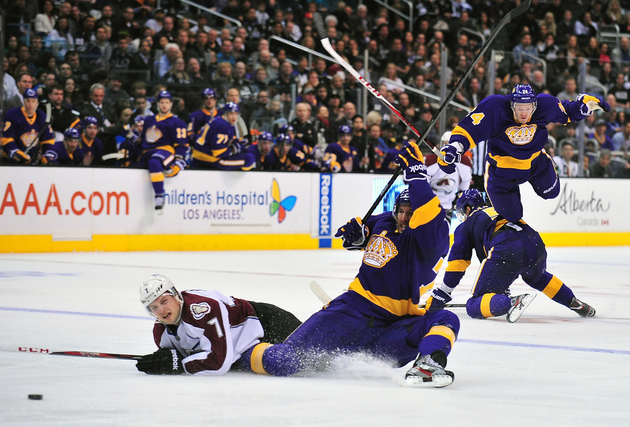