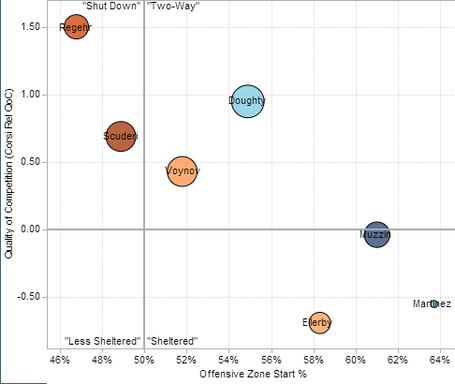 Positives: The first positive that leaps off the player card above is how well Slava Voynov performed last season while being saddled with the worst linemates (from a possession standpoint). His QoT of -1.825 was dead last, yet he posted the highest point total at even strength among defensemen. In addition, he was 2nd in time on ice which shows that he was able to win the trust of the coaching staff in his first full NHL season.

That being said, his possession numbers weren't stunning. He posted the 4th best Corsi rate on the team. A lot of this had to do with teammates as Rob Scuderi really weighed down Voynov's numbers. When Voynov was on ice with Scuderi, his Corsi % was just above water at 50.6%. Without Scuderi that percentage jumped to 64.1%. It'll be interesting to see if those numbers take a jump after Scuderi's departure.

Incidentally, over his career when he has been paired with Alec Martinez his corsi% is an insane 65.9%. Given that Voynov has shown that he is more than capable of playing in his own end (one of Martinez' percieved flaws), maybe it's time to give this pairing a shot full-time?

Negatives: It really is hard to find very many negatives when talking about Slava Voynov's performance last season. He was solid in just about every aspect of his game. But one thing that could open him up to criticism this coming season is a likely dip in point totals. Voynov ran really hot in assists. Only a minority of those were first assists. It's been shown that second assists are a less repeatable talent than first assists. He also scored an a highly unsustainable pace in the playoffs (totalling 6 goals which matched his regular season numbers), which may have raised some unrealistic expectations about what he can provide offensively on a consistent basis.

Additionally, Voynov had a hard time getting shots off on the power play. In fact, Voynov had the 5th worst shot rate among NHL defensemen that saw significant time on the power play. The word from Darryl Sutter is that Voynov is going to play on the top unit this season. In order for him to stay there, he may need to learn to be a bit more assertive.

Voynov showed that he could play a big role last season and that likely means his role this season will only get tougher. He'll need to show that he can keep handling added responsibility as he continues to develop.

Grade: Voynov's strong regular season and his hot shooting in the playoffs earn him an A in our book. He probably won't continue to shoot 17.6% as he did in the post-season, but it was timely and earned him recognition as the rest of the Kings had a hard time finding the back of the net. Voynov may not provide the same level of offense this year, but his strong two-way play should more than make up for it.