Matt Greene was on pace for 48 assists before a back injury claimed his season. WHAT COULD HAVE BEEN? 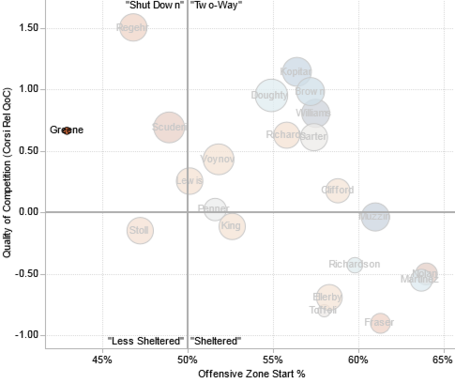 Positives: Uh. He beat his initial prognosis of "out for season." That's about it.

Okay, that's not entirely it. He did return in time for the playoffs. Darryl Sutter used him just slightly less at even-strength per game in the playoffs than he did over the course of the 2011-12 season. Some of that is inflated by the double-overtime game-5 against Chicago (which bumped up his ES ATOI in the playoffs by more than a full minute). On the whole, that is a plus going forward. Given the fact that Sutter wasn't completely afraid of using him, a full summer of rest should mean a healthy Greene at the start of training camp.

It's difficult to get a real read on a player that amassed just 14 games over a very fractured season which saw him leave the lineup twice due to separate injuries. Basically, if he's healthy, then he's a known quantity. He's a big, mean defensive-defenseman that has toned down his game as he's matured. He's a team-first guy that has absolutely earned the 'A' on his sweater. He likes to hit, but doesn't get caught out of position to throw one as often now as he did when he was acquired. Although he's not fleet of foot, over time he has improved his positioning to be a reliable defender that the Kings lean on heavily to kill penalties. In 2011/12, only Willie Mitchell saw more time on the PK than Matt Greene.

Along with Willie Mitchell's knee and the struggles of Jon Quick, the void Matt Greene left led to a decline in the Kings penalty kill. Going from Mitchell and Greene to a declining Rob Scuderi and an average-at-best Robyn Regehr as your most relied upon penalty-killing defensemen can do little but hurt your chances. While Quick's nosedive was certainly the most tangible (and important) factor in the Kings going from an 87% success rate in 11/12 to an 83.2% success rate this season, I'd rather not see Keaton Ellerby get over a minute and a half of PK time per game.

Interestingly, the Kings allowed more shots/60 while shorthanded in 11/12 than they did in 2013. Make of that what you will.

Negatives: Back injuries suck. Given Matt Greene's style of play, it's expected for him to suffer some wear and tear. It would be unrealistic to count on him being as healthy as he'd been prior to 2013. He's entering the latter portion of his career, he has a serious back operation on his ledger, and he isn't blessed with a ton of actual hockey talent (relative to the average NHLer). Although Greene is a defensive defenseman that relies on strong positioning to be effective, the fact that he uses his strength to push people around could be troublesome going forward. Will he be able to adapt his game to a more conservative style in order to make up for already average skating? Is his pure defensive game going to remain above average as his physical tools decline? Any serious decline in his play would push the bottom pairing defender out of the lineup.

Unfortunately, we've already seen Rob Scuderi's game decay before our very eyes and he had considerably less reliance on physical tools than Greene. Scuderi often seemed stuck in the mud when he had the puck. His lone outlet play is an Anaheim Ducks-ian flip to the neutral zone. Is Greene's game going to degrade to that point or worse? Any injury can accelerate a player's decline, is it possible that Matt could see the ill effects of his injury as soon as this year? We've already seen Jonathan Quick struggle through recovery from a back injury. Will Greene be just as sluggish? Lots of questions and only time will tell the answers.

He will never bring much more to the table than his defensive play. He has very little in the way of offensive skill, and that's being kind. He's not a terrific skater. He is the prototypical stay-at-home, physical defender. That's it, that's all. Certainly a necessary cog in the machine, but his game comes with expected deficiencies.

Going Forward: The Kings basically get his "show me" year built into his contract. If he struggles, the Kings showed this season that they can still play a solid defensive game without him. They can easily withstand losing him in the off-season if it comes down to it. While Greene at his best is certainly better than Keaton Ellerby or Jeff Schultz, the Kings will survive if Greene goes down again. That said, it's impossible to quantify the effect his leadership and intangibles bring to the table.

If he's healthy, Greene is the heart and soul of the Kings' defense. He's a leader. He's physical, blocks shots and kills penalties. Greene does everything asked of him and he does it well. He even seems like a genuinely good dude. No, he doesn't contribute a lot offensively. Thankfully for Greene, the current landscape of the NHL provides a home to role players, even those that make close to 3 million dollars a season.

Given the nature of his injury in 2013, there are serious questions about his game surrounding the upcoming season. How well will he be able to clear the crease? Is he going to be able to throw his body around in the corners? Could his herniated disk be a harbinger of things to come? It's a contract year for Matt, which is probably a good thing for the Kings. He has a lot to prove. If he doesn't show his best now, he could struggle to find a place to play in 2014.

The Kings are in a precarious position with Greene right now. The lack of NHL-ready defensive depth has already been covered on this site. If he struggles, could the Kings bring him back simply because they don't have a ready replacement? Is it a good idea to retain a 31 year old defensive defender with a recent injury history, regardless of how much success he experiences next season?

(All stats mentioned in this post are available by tinkering around at NHL.com and behindthenet.ca.)