The Kings' skid continues as they lose to Dallas for the second time in eight days. The penalty kill, defense, offense, and goaltending all falter, so that's not great.

It's gonna be a short recap today, but let's get to it. The day after a demoralizing loss at Chicago, the Los Angeles Kings once again struggled after falling behind and lost by a goal. Today, it was the Dallas Stars who had more energy and shut down the Kings in the third.

The first period started out all right. Lots of breaks in the action, though. Why? 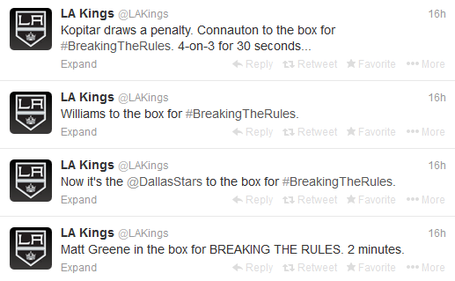 Anyway, with Dallas carrying an awful power play percentage and Los Angeles also struggling (as you're all well aware), it didn't seem like the penalties would matter all that much. But once it got to 4-on-3, the Kings' eyes lit up and they scored a fairly weird first goal. Jeff Carter got a tip on a long shot from Mike Richards, and it made it over Kari Lehtonen's shoulder before dropping to the ice and trickling across. Clearly, we were just relieved not to be facing an unheralded backup. However, after the Kings once again #broketherules, Dallas cashed in on their power play. Erik Cole's rebound goal sent the teams into the locker room tied.

Second period analysis is simple: the Kings were just not good. They got an unlikely chance while shorthanded, but Mike Richards shot wide and their 2-on-1 opportunity went begging. Dallas came right back and notched their second power play tally of the game just seconds later, with Tyler Seguin putting home a bounce off the boards before Ben Scrivens could slide across and make the stop. Scrivens allowed another goal from the side three minutes later, as Erik Cole picked up his second of the game. The Kings simply did not get their usual opportunity to control the game in the second period, and it left them in a sizable hole heading into period number three.

At least Anze Kopitar keeps scoring. After hitting the post earlier in the evening, everyone's favorite Slovenian was able to put the Kings back within one thanks to some confusion in the Dallas defensive zone. Kopitar was the first to find the puck after Jordie Benn and Jamie Benn collided, and he cleanly beat Lehtonen. The Kings could not get anything out of the final 19 minutes despite improving their all-around play, only notching five shots on Kari Lehtonen in the entire third. As such, they did not get anything out of this game.

So the Kings were thisclose to making it the entire calendar year without losing four in a row. Their only other three-game losing streak? The first three games of last season; in other words; the Kings' first three contests of 2013. Bookends are fun!