Jake Muzzin may be scratched, does he deserve it?

Share All sharing options for: Jake Muzzin may be scratched, does he deserve it?

Note: This article was originally witten in January, the last time Muzzin was in danger of being a healthy scratch.

According to LA Kings Insider Jon Rosen, line rushes looked like this at today’s practice:

It looks like Jake Muzzin is the odd man out after an atrocious play that lead to a goal last game against the Red Wings:

Thoughts on Muzzin’s play there can be summed up by this photograph: 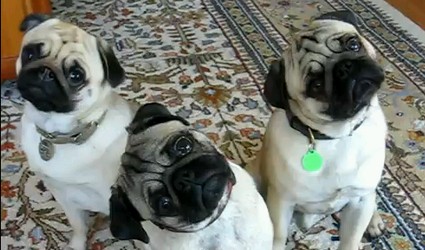 So yeah, Muzzin panicked and made a boneheaded play trying to cut in front of the net instead of going around behind it. As a result of that play and a subpar performance in that game overall, it looks like he will now be sitting tonight’s game against the Canucks.

But is benching Muzzin the right move?

Our SB Nation cohort Eric T. wrote a great piece over the summer about the proper way to evaluate defensemen.

Our memories are tuned to remember the occasional high-impact play much more strongly than all of the low-impact stuff that happens in between. We will remember a defenseman's turnover or missed coverage that leads to a goal but probably forget if the shot hits the goalie in the chest, so the team's save percentage with him on the ice affects how many of his mistakes we remember and how we judge him.

The best way to look at a defenseman’s performance is not by focusing in on a turnover that lead to a goals against, or even goals against over a small sample of games. Goal numbers are very influenced by save percentage which is a something completely outside of their control.

So instead of looking at goals, it’s better to use shot-based metrics. And it’s better to look at these over the bigger picture. So far this season, Jake Muzzin leads not just all Kings defensemen this year in shot differentials, but all defenseman across all teams in the NHL. When Jake Muzzin has been on ice this season, the Kings have owned 61% of all shots attempted at 5v5.

Now obviously, this doesn’t mean that Muzzin is the best defenseman in the league. He has benefitted from a pretty strong defensive partner in Drew Doughty and a strong puck possession team overall. Still, the numbers indicate that his offensive assets have far outweighed his perceived defensive liabilities this season. Not only that, but he has helped make Drew Doughty a more effective player.

Here is a chart showing Drew Doughty’s possession numbers with his top defensive partners over the years: 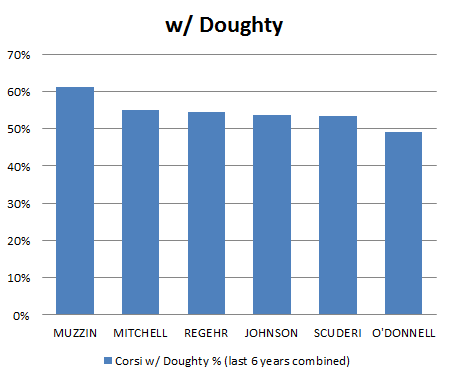 When Drew Doughty and Jake Muzzin have been on the ice together, the Kings have owned a 61% of all shot attempts. That number is astounding when you factor in that Doughty is mostly used against the opposition’s best players night in and night out. So basically, when they are on the ice together, the Kings always have the puck no matter who they’re playing against. And teams that have the puck more, win more.

Additionally, Muzzin has more than held his own without Doughty over his career. In 406 minutes without Drew Doughty, the Kings have owned 64% of all shots attempted when Jake Muzzin has been on ice at 5v5.

Certainly, few would argue with the fact that Jake Muzzin is an asset in the offensive zone. Still, many would claim that Muzzin is a liability in the defensive end. He is still a young player and definitely prone to making some big gaffs. But are his mistakes resulting in any more scoring chances than other defensemen?

Shots Against at Even Strength

About 76% of goals are scored from the home plate area at even strength in the NHL. It would be reasonable to assume that if a defenseman is terrible in the defensive zone, then he would give up a high percentage of shots from this area.

Matt Greene, who is replacing Muzzin in the line-up tonight and who is perceived to be a strong defensive zone player, is a team worst 43% (despite going up against softer competition and receiving fewer defensive zone starts). Greene has benefitted from a .922 save percentage on shots from home plate, whereas Muzzin’s is much lower at .887.

As we saw above, defensemen have no control over save percentage. Muzzin doesn’t give up a higher percentage of quality chances than everybody else, it’s just that more of his gaffs have led to goals causing people to perceive that he has been worse in the defensive zone than he truly is.

There’s no doubting that Muzzin had a rough game Saturday night. Yet, by benching him the Kings will not be icing their best line-up tonight.