The Kings are not as good with Tyler Toffoli out of the line-up.

Share All sharing options for: The Kings are not as good with Tyler Toffoli out of the line-up.

The Kings announced today that Tyler Toffoli is being sent back down to Manchester after a recent dry spell in offensive output. The move was also made to clear space for further moves down the line that will likely include calling up a defenseman due to an injury to Matt Greene. Additionally, there is speculation that the team is trying to clear roster space for a potential trade.

Still, I don’t see how Toffoli being sent down would more easily facilitate a trade. And if they just need to make room for a defenseman, there are better options. Especially, when Toffoli has been an important asset and one of the few forwards on the roster who have made significant contributions to the team’s offensive numbers.

At 21 years old, Tyler Toffoli had among the strongest puck possession numbers on the team. When he has been on-ice at 5v5, the Kings have owned 59% of all shots that have been directed at the net. That number is good for 9th best in the NHL this season.

Now, as we’ve mentioned many times, we have to take numbers like that and give them proper context. First of all, Toffoli benefits from playing on the strongest puck possession team in the NHL, so that should help his numbers along quite a bit. Second, it’s important to keep in mind the role he has played. He’s been used in a heavily offensive role. He has started 42% of his shifts in the offensive zone, second most on the team. He’s also gone up against pretty middling competition.

That being said, let’s look at how Toffoli has fared in these kinds of minutes as compared to players on the team that have received even easier minutes: 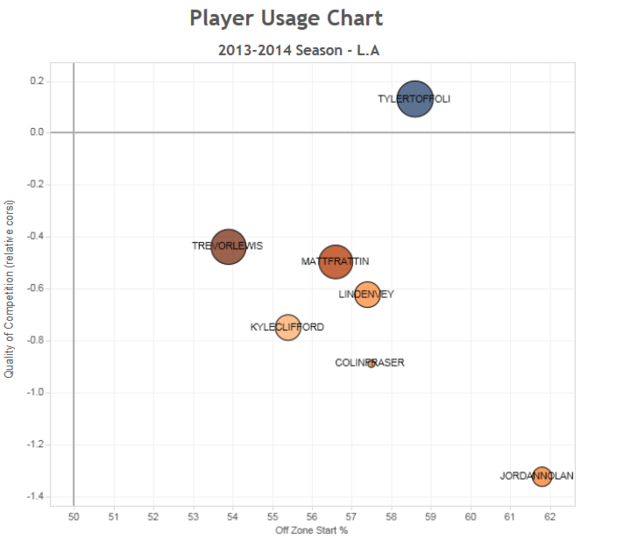 What this chart is showing is that even though Tyler Toffoli received much tougher minutes (quality of competition) than anyone on this chart, his possession numbers have been head and shoulders above the rest.

Perhaps, some will point to the fact that he’s benefitted from being lined up next to Mike Richards. Let’s consider what kind of effect Toffoli has had on Richards’ possession numbers. Richards has lined up with Toffoli for 236 minutes at 5v5 so far (more than any other teammate). In those minutes, the Kings owned 59% of all shots directed at the net. That is a very high number and it means that when they are on the ice together, there is a very strong likelihood that the Kings are controlling the action.

But when we look at Richards’ numbers without Toffoli, they drop substantially to 53%. Even if we adjust these numbers to account for Toffoli's beneficial zone start numbers, his effect is still very positive. 56% with Toffoli and 52% without. No matter how you slice it, Richards has been a more effective player at even strength when he has been on the ice with Tyler Toffoli than he has without him.

The biggest justification for Tyler Toffoli being sent down is the fact that he has struggled to score goals in recent games.

Kings re-assign Tyler Toffoli to Manchester. No goals in 11 games and one goal in past 16 games.

While it is true on face value that it’s been a while since Toffoli has scored, it is an over-simplification. Looking at the big picture, Tyler Toffoli has scored 9 goals in 33 games. That is a 22 goal pace over 82 games. 22 goals over a full season in the NHL would be a pretty good number for a 21 year-old rookie.

Over his first 22 games he was on a 34 goal pace while shooting an unsustainably high 18.3% (league average for NHL forwards is 10.8%). That percentage had to come back down to earth at some point and it did so over the last 11 games.

What stayed consistent over Toffoli’s slump was his ability to get shots off. In his first 22 games where he scored 9 goals, he managed to get 3.4 shots off for every 20 minutes he was on ice. Over his 11 game slump, he managed an almost identical rate at 3.2 shots. Nothing changed for Toffoli except that the puck just wasn’t going in the net.

If we extrapolate Toffoli’s shot rate over a full 82 games and based on 13 minutes of ice time per game, Toffoli would have exactly 20 goals if he shot at league average. If he did a little better, say 13%, then we’d expect him to score 24 goals. Looking at Toffoli’s potential replacements on the current roster, nobody comes close to matching his expected goal scoring production.

Looking at goal scoring over a short stretch of games can give you a false impression of a player because shooting percentage numbers can get really out of whack in small samples. It’s better to look at how many goals we’d expect a player to score based on his shot rates and use reasonable estimates in shooting percentage over the long haul, rather than focus in on a short term slump or hot streak. It gives us a big picture view of the situation and lessens the chance that we’d get fooled by short-term randomness, thereby giving us more realistic expectations of a player.

The fact of the matter is cold spells happen to everybody and they happen quite often—even to the league’s best. As SB Nation’s Adam Gretz wrote in an excellent piece regarding scoring droughts:

Hockey's a weird game sometimes. It's a fast, physical, fluky series of events that can produce crazy results in individual games or small stretches throughout the season. You have players flying around the ice, chasing a puck that's wildly bouncing off the walls as they try to pick a corner on the net that's the size of a coffee can. Sticks get in passing and shooting lanes. Deflections go wide. Shots ring off the post or crossbar a quarter of an inch from being in the back of the net.

There's only so many goals to go around, and sometimes no matter how hard you try, how hard you play, or how well you play, the puck just isn't going to go in for you. It's true on a team level and an individual level.

It’s not enough to say a player has been struggling just because he hasn’t scored a goal in 10 or so games. It is better to dig deeper. And when we dig deeper, all of the underlying evidence points to the fact that Tyler Toffoli has played very well since being called up and the Kings are a weaker team without him in the line-up.