Your regularly scheduled grades and analysis will be back the next time the Kings play a hockey game.

The Canucks and Kings met up on Monday night and did some things. For a very brief period, they even played hockey.

Normally, I bring you the numbers. The shot attempts and zone starts and competition and fun (or not so fun) stuff. I'll include some of that at the bottom, but I feel little need to actually analyze whatever happened on Monday night. It certainly was not a hockey game. In fact, when I complained about what I had just watched, someone informed me that what I watched was a war.

I don't have any real problem with fighting. I don't care for staged fighting at all, but a fight when emotions are running high at least makes some sense to me, if nothing else. It's not my favorite, but I can tolerate it in my game. What I say about last Monday's game is not encouraged by an anti-fighting stance. Ryan Kesler fighting Dustin Brown did not grind my gears, nor did Bieksa going after Greene. What bugged me is the mentality behind those fights.

When Jim Fox introduced us to the game on Monday, he told us that Vancouver came into this game with a grudge. I had almost completely forgotten that Dustin Brown knocked over Roberto Luongo after scoring another game-winning goal in the last meeting between these teams, but apparently the Canucks had done enough remembering for the both of us. For the first forty minutes of the game, what we saw was indeed a war. There were cheap shots and impotent punches and dirty plays and greasy action but not much actual sport. Aside from Vancouver pulling out its genitals and shouting to the world that what they have is pretty big, little in the way of competition actually occurred.

If not for a ridiculous extended stretch of power play brought on by undisciplined and pointless plays, the first period chances were 3-1. Eight of the period's twelve scoring chances occurred away from 5v5 play. All Vancouver managed to do early was suck the energy out of both teams. The fans were bored by what they had just seen, as was evidenced by an utterly dead crowd that didn't do a whole lot in the way of cheering until Dustin Brown put the Kings on top. Aside from a few skirmishes brought on by absurd, dick-swinging type plays, the players matched the intensity of the crowd.

Unless you're a fan of the Predators or the Devils, the second period could not possibly have been any fun for you. If you were so thrilled by a pair of brief fights that you were able to ignore one of the worst periods of hockey I've ever watched, then I commend you. Scoring chances in the second period were a woeful 4-1 total, and three of those came in quick succession during 4v4 play. For well over 90% of the period, nothing of actual interest happened. The players skated and went through the motions of a hockey game without ever actually making the motions that make a hockey game.

For all of their sound and fury, Vancouver generated nothing. All of their hooting and hollering and mud-slinging resulted in four scoring chances at full strength play. Sure, they managed a couple of chances against a lackluster Kings' power play. Yeah, they can take a moral victory away from the 3-0 advantage in scoring chances they had at 4v4, especially given the Kings' prowess in such situations.

Unfortunately for them, they gave away two points against a team they're trailing in the playoff race. Don't be fooled by the Kings' lack of power play success; the Canucks willed the game away as soon as Zack Kassian decided to haul down Dustin Brown nine seconds into the game. While the Kings did absolutely nothing with their power play time throughout the night, Vancouver gave away three-quarters of a period to the Kings. Never did Vancouver really attempt to threaten the net -- the primary objective of a hockey game, if I need to remind you -- throughout the time that they weren't populating the penalty box. Never did they make Jonathan Quick test his recently-healed groin. Never did they do much of anything.

By the numbers, the Kings -- an elite possession team -- did not have their strongest game. Despite an overwhelming advantage in power play time, the Canucks trailed the Kings in shot attempts by just two; they also managed to tie the Kings in scoring chances at twelve apiece. Instead of capitalizing on a not-very-strong performance by a team that had been stringing them together, the Canucks opted to send a message. Like most messages sent by anyone, ever, it was meaningless and the Canucks lost the game.

The grand irony of the Kings' win is that they played the exact game that teams should be playing against the Los Angeleses and Bostons of the world. You don't alter your gameplan. You don't adjust to your opponent. The idea of hockey and sports in general is to make your opponent react to you. The Canucks were once excellent at this, and have since abandoned that philosophy because they followed up a Stanley Cup Final appearance with a couple of mediocre first round exits.

Now they feebly attempt to swing hammers instead of hockey sticks and the western conference is better off for it. The Canucks were always bound by age to have their window shut on them somewhat soon after their game 7 loss to Boston. Instead of propping that window open, they doused the house in gasoline. Should nothing change, in a year or two someone will have to strike the match and start over, and Vancouver will be remembered -- like Washington before them -- for accelerating their own destruction. 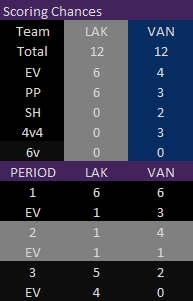 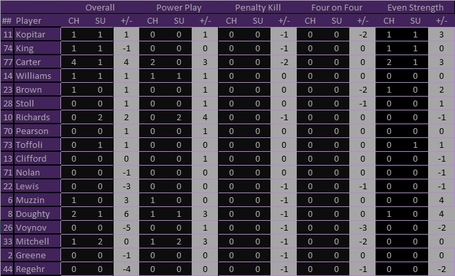 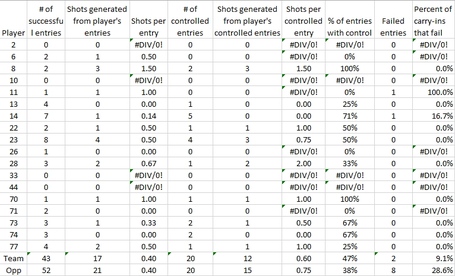 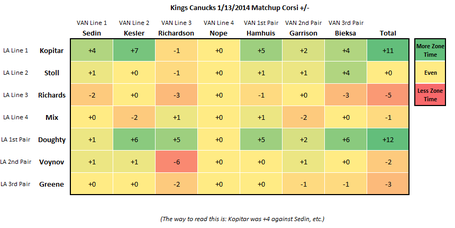