The Kings have been waiting for a few messy goals, and they get them on Thurday against the St. Louis Blues. Bonus: the ending gets messy, too. Thankfully, Quick is excellent.

It's official: Dean Lombardi and Darryl Sutter are smarter than all of us. The Los Angeles Kings sent down Tyler Toffoli two days ago, and we weren't exactly jazzed about it. Then, after calling up Linden Vey to join fellow rookie Tanner Pearson, both players were scratched tonight, causing more consternation on our end. Little did we know that the scoring the Kings were looking for was here the whole time. 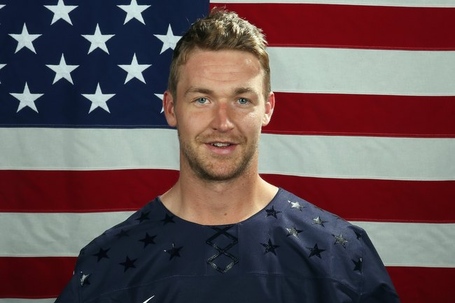 A lot happened before and after, but two quick and dirty goals by Trevor Lewis helped LA grab a 4-1 win over the St. Louis Blues.

The game got off to a quick start, in both the physical department (no surprise) and the scoring department (surprise). An early Robyn Regehr hit on Vladimir Tarasenko forced the Blues the way of the Vancouver Canucks, but fortunately for Barret Jackman, Regehr was willing to drop the gloves. Soon after, the recently polarizing Jake Muzzin delivered a positive contribution by getting the Kings on the board. Assists from Colin Fraser and Jordan Nolan kicked off a solid night for the fourth line, vindicating Sutter's decision to stick with a physical fourth line. Muzzin took a wrister which was screened by the fourth line's third member, Kyle Clifford, and beat Jaroslav Halak glove side.

Special teams took over the remainder of the period, but no one was able to capitalize. The Kings got two power plays in the first; the power play number one didn't really threaten the St. Louis net, but a sharp wrister by Justin Williams hit the corner (where the post meets the crossbar) on the second power play. Meanwhile, the Blues only got one shot on their lone power play of the period, and the best chance actually came when Jarret Stoll bolted out of the box and forced a couple saves out of Halak the other way. St. Louis improved over the course of the period, but the period ended 1-0. High point for St. Louis: David Backes drilled Dustin Brown with a clean hit, and thankfully, no fights afterward.

An early second period Kings PP didn't even generate a shot on goal, and St. Louis soon found itself with a golden opportunity to tie the game. Muzzin has been noticeably better at getting his shots through to the net this season as evidenced by the first goal, but T.J. Oshie was able to block a Muzzin wrister and drive the other way on a breakaway. Muzzin was able to keep Oshie from getting a shot off by jostling him from behind, but Oshie was (correctly) awarded a penalty shot. The Blues' U.S. Olympian came out on top of the Kings' Olympian, beating him five hole after cruising in slowly towards Quick. Quick was visibly angry after the goal, and he turned it on for the rest of the game.

Ryan Reaves took a revenge-based penalty against Jordan Nolan (who has annoyed opposing players more than Dustin Brown lately) after the second-period buzzer, and though the power play was unsuccessful, it allowed the Kings to make the Blues' defense run around for a couple minutes. Sutter put the Kings' new third line of Jarret Stoll, Dwight King, and Trevor Lewis out on the ice as the PP ended, and it paid immediate dividends. As King drove to the net, Lewis sped down along the boards and threw the puck to the front. Though it initially appeared to be tipped in by King, he never touched the deflected puck. GOAL, TREVOR LEWIS!

A couple minutes later, Jeff Carter went to the box, and Jarret Stoll won a faceoff in the defensive zone. The Kings cleared, and Halak attempted to intercept the puck before it crossed the goal line in the corner. When the puck got by him, Lewis once again sped down the boards, grabbed the puck, and wrapped the puck around for a goal before Halak and the defense could block the net. TWO GOALS, TREVOR LEWIS!

The Kings weren't quite home free yet, but Jonathan Quick ensured that the Kings wouldn't be beaten again with a sequence of terrific saves in the third. Patrik Berglund had a couple of chances denied, including this gem of a save with the glove.

Muzzin also continued his up-and-down evening by blocking a Blues rebound with the puck on the doorstep, but Muzzin's night went back downhill with a bad hit on Vladimir Sobotka. Muzzin is already taller than Sobotka, so when he put his arms up and elevated into his check along the boards, he caught Sobotka's face and pretty much nothing else. After Jeff Carter put the game to bed with an empty netter (after Lewis missed! Argh!), the Blues sought vengeance and took a few shots at Muzzin before the final whistle.

Muzzin probably won't see supplemental discipline for the play. At least, the Kings will hope he doesn't, because they're already short on defensemen. That's the only negative on a great night for Trevor Lewis and Jonathan Quick, and a good one for the rest of the team.