Kings Clips: What's Wrong, and What Should We Expect from Saturday's Outdoor Game?

Share All sharing options for: Kings Clips: What's Wrong, and What Should We Expect from Saturday's Outdoor Game?

Interesting day for the Los Angeles Kings today. Tyler Toffoli is back, Jeff Schultz finally may get to set foot on ice in California, Tanner Pearson and Linden Vey are headed to New Hampshire, and Brandon Kozun is off to Canada. All of this is fairly minor, though, because the Kings are in TROUBLE. With a capital T, and also assorted other capital letters. Ring the alarm.

And yet... The Kings are playing their worst hockey of the year, and yet, aside from Tuesday's Columbus ugliness, they haven't really been blown out in any of their past ten games. There also isn't one consistent factor dragging them down. Sure, a soft goal and a few defensive breakdowns doomed them yesterday. But if you asked anyone on a random day in January, the big problem has been either depth scoring, any scoring, the power play, the penalty kill, goaltending, late-period letdowns, bad luck, or Robyn Regehr (because people like blaming him for stuff). The point is, lots of things have gone wrong, but are any of these consistent long-term issues? Or issues that are rearing their head occasionally, but are less concerning on a larger scale?

The next two games are going to go a long way in answering that question. The Anaheim Ducks are coming in off of their first home regulation loss of the season, so any questions about their motivation are moot. Neither team is going to sleepwalk on Thursday, and if it looks like they are skating in mud on Saturday, it'll only be because the refrigeration unit is having terrible problems. The Ducks aren't invincible, and the Kings aren't incompetent. But if the Kings can't pull out a win in one of these games, the questions are going to be back in force.

Now then, let's get to the links, and today we're exclusively covering the Stadium Series game at Dodger Stadium! Today's are provided by Wurstkuche, a Willie Mitchell-approved dining establishment. 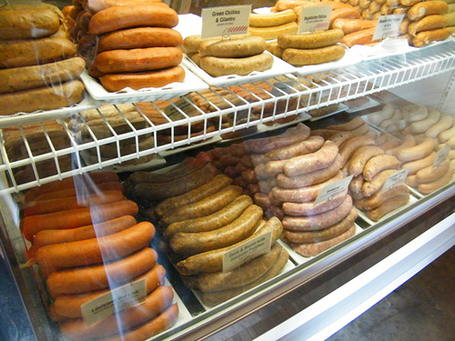 We'll end with a tweet that should immediately invalidate any doubts you have about putting a hockey game outside in Los Angeles. Make sure you're all caught up on today's non-outdoor game news and on our coverage of yesterday's loss to the Blue Jackets below.