Recap: Anaheim able to capitalize on chances, Kings not so much.

The Kings inability to produce offense is now officially a problem.

Share All sharing options for: Recap: Anaheim able to capitalize on chances, Kings not so much.

Coming into tonight the Kings had scored 2 goals or less in 11 of their last 15 games. It was pretty certain that they'd need more than a couple to beat the Ducks. Unfortunately for them, that didn't happen.

Things started well for LA as the re-shuffled line combinations produced a goal about three minutes into the game. The play was sparked by Anze Kopitar who forced a turnover in the defensive zone and was able to transition the puck to Dwight King. King, who's ability to distribute the puck has made big strides this season, was able to hit Trevor Lewis with a perfect pass as he streaked down center ice. Lewis was unable to bury the breakway chance, but the puck ended up back on King's stick who sent it through the slot where Kopitar was able to bury it.

And voila, just like that, all of the concerns about the new line combinations seemed to dissipate. The Kings dominated the first, having out-attempted Anaheim 18 to 9. Yet, they weren't able to translate a dominant possession game into very many quality chances.

What then followed, was a disastrous 2nd period. LA actually caught a break midway through when an apparent goal was waved off. The refs claimed that Jackman made contact with Jonathan Quick and interfered with his ability to save Ben Lovejoy's attempt. The replay showed the contact to be very light, and the goal should have counted.

However, they would soon give way after some lackluster play with the man advantage followed by taking a string of interference penalties. The last of which resulted in a power play goal from Dustin Penner. The goal matched Penner's power play goal production in his entire stint with the Kings.

The Ducks seemed to have LA on their heels from there and a poor defensive zone turnover from Willie Mitchell led to Patrick Maroon's go-ahead goal.

The Kings were able to dominate possession from then on but that again resulted in few quality chances. 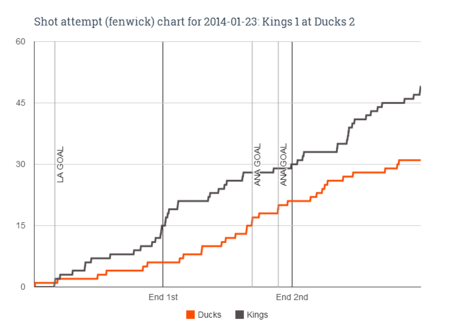 LA has now dropped 4 in a row and are an eye-popping 17 points behind the Ducks heading into Saturday's Stadium Series game.

The two teams will hold separate practices tomorrow in the outdoor rink in Chavez Ravine before going at it on Saturday. The stakes will be much higher for LA as they will try to break out of their funk and come away with two points.