I'm tired and this game sucked so don't expect much out of this recap.

Stop me if you've heard this one before: the Kings dominated possession, had way more shots on goal, but couldn't score and lost 3-0. Really it was almost a carbon copy of Thursday night's game, except outside and without a Kings goal first (the third Ducks goal was an empty netter, so they scored the exact same amount of goals too). Also KISS was there, for some reason, presumably because the NHL wanted to make sure Kings fans suffered as much as possible. Thanks guys.

The Ducks took the lead just 2:45 into the first. The puck came towards the net off of an offensive zone faceoff, and an off-balance Willie Mitchell had no choice but to clear it back up the middle, and right onto Ryan Getzlaf's stick. Getzlaf's shot squeaked through Quick's pads (who, it must be sad, wasn't particularly great tonight either) and was laying in the blue paint behind him, where Corey Perry quickly jammed in his 28th goal of the season. I'm sure if you pressed me I could think of a worse start to this game than "Corey Perry scores goal", but it's certainly up there.

Things would get worse less than six minutes later. The Ducks had a good offensive zone cycle as Teemu Selanne passed the puck down to Nick Bonino, who saw Matt Beleskey get the angle on Jeff Carter as he beat him to the front of the net. Bonino made kind of an aerial pass to Beleskey, and the puck bounced off of Belsekey and past Quick without Matt even needing to get control of it. It was the exact kind of goal the Kings never seem to score, a combination of some hard work and a very lucky bounce, and the Ducks were ahead 2-0. Anze Kopitar ended up with a chance to cut that lead back to 1 just a few minutes later after Ben Lovejoy hooked him on a breakaway, but failed to score on a penalty shot, trying to go five-hole on Jonas Hiller (who was excellent all game long and made some highlight-reel stops) and failing. Fun! The Ducks still lead at the end of the first, 2-0.

Those two goals were on two of Anaheim's six shots in the first period. The Kings, on the other hand, had twenty shots in the period, but of course finished it trailing 2-0. Don't believe the NBCSN announcers' narrative about Anaheim somehow having the better chances, either: our own Nick had the chances as 7-3 Kings, 5-3 at evens. And while we're on the subject, good god were the announcers awful. Not "longing for Pierre McGuire" awful, but pretty awful.

The second period was a thing that I guess happened, but hell if I remember anything from it. Nick had the chances as 3-2 Ducks (while also calling it one of the worst periods of hockey he's ever seen), the shots were 6-6, and the goals were 0-0. Yeah. Not good news for the team that's trailing by two goals, that's for sure.

In the 3rd, the Kings had more chances and out-shot the Ducks 10-8, but still couldn't find a way to break through. Dwight King appeared to have an empty side of the cage at one point but had the puck bounce over his stick, as Kings fans around the globe immediately went "oh, yeah, that checks out." simultaneously. The Kings also had a hard time getting shots through against the Ducks, who consistently seemed to stick three players directly in front of Hiller at all times and blocked seventeen shots by the end of the game. You would think that kind of strategy could backfire pretty easily- a puck might bounce off one of the skaters standing almost in the blue paint and past Hiller, or Hiller just might be screened by his own man when something does get through- but because this is the Kings we're talking about, nothing even remotely like that happened. Instead, the Kings failed to even dent the scoreboard, and with 1:29 left Andrew Cogliano put in an empty-netter to squash even the laughably small possibility of a miracle comeback.

This is a tough game to judge, because obviously it was heavily score effected, as the Ducks scored two quick goals and the Kings were never able to answer. For the "too many defensive breakdowns!" crowd (hi, Jim Fox!), neither goal stood out as a particularly bad breakdown by the Kings, either; the first goal was a weird play off a face-off, and who knows if the ice contributed to Willie Mitchell being off-balance and having to turn the puck right over to Getzlaf (players seemed to have more trouble than usual staying on their skates throughout, with Jeff Carter memorably just falling the hell down for no reason at one point). On top of that, you could easily argue Quick could have (and maybe should have) made the save on Getzlaf without letting the puck squeak right through him for that jerk Perry's easy tap-in, as the shot was dangerous but not that dangerous. The second goal was just a complete fluke and other than Jeff Carter losing his man in front for half a second (before tying up his stick pretty well coming back), there just wasn't much there.

Anyway, for what it was worth the Kings did dominate possession again. They out-attempted the Ducks 70-34 (67.3%) and in unblocked attempts lead 53-32 (62.4%). At evens, it was 52-28 Kings in attempts (65.0%), 37-27 in unblocked attempts (57.8%). The Ducks' shot blocking clearly was a positive for them, even as they were hemmed in their own zone for long stretches, and whatever shots they didn't block Hiller was up to the challenge of stopping. It was just "another one of those games" for the Kings, as yet again they controlled possession, had the better chances, and were unable to dent the twine. One will certainly look to Darryl's curious decision-making before this game, both to keep the forward lines exactly the same from Thursday (though he did swap Carter back to the top line with Lewis sent down to the Richards/Frattin line after the end of the 1st period) while leaving Tyler Toffoli up in the Vin Scully press box again, as possible detriments to the team. The Kings are having a hell of a time scoring right now, even more so than usual for them, and decisions like those probably only make things even harder. Hopefully tonight's shutout loss means Toffoli can get back into the lineup on Monday, when the Kings travel to San Jose to face the Sharks, aka the team they haven't beaten in San Jose in over 2 1/2 years. Sounds like a real slump-buster! Oh, and the Sharks won tonight, meaning they're now ten points clear of the Kings for the second seed in the Pacific (with a game in hand on top of it). I'm the bearer of bad news tonight, I'm afraid.

Here's your Fenwick chart in my last, desperate attempt to make you feel better: 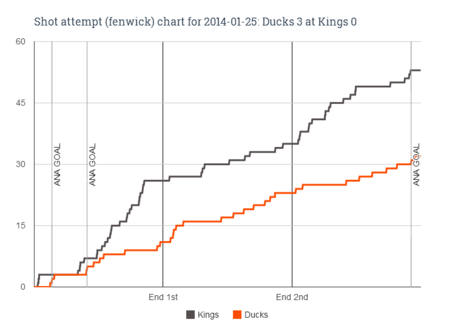 It probably didn't work, but I tried. Comment below and try to see if you can sound less depressing than me, please. Thanks.