If you don't want to remember the events of Saturday's game at Dodger Stadium, just recall the dozens of times this season that the Kings have dominated another team statistically only to come up short.

Sure, there are variations on that theme, but at this point it's just sliding the scale from "frustrated" to "agitated" and back again. The Kings played an okay game, but I think the whole thing was pretty listless. Either the ice was so bad that it made both teams play without any gusto or both teams were just not interested in playing very intense, rivalrous hockey. The second period was one of the most boring things I've ever watched, at the very least.

The Kings again controlled the pace of play for the most part. They forced 25 faceoffs in Anaheim's end, as opposed to just 13 in their own. They doubled up the Ducks in overall shot attempts. They out-chanced Anaheim by 11 in all situations and by 4 at even strength. Unfortunately, Anaheim got the goals, and that's all that ultimately matters.

A more pointed look at this game reveals that Anze Kopitar was the team's bus driver. He led the team through the neutral zone and gained the zone a team-best 8 times; 7 of those came with control. The Kings also generated more shots (1.13 per entry) on his forays into the offensive zone than they did with anyone else leading the charge. He directly factored in to 7 scoring chances (4 chances, 3 set ups) and went a staggering +9 at 5v5 play, which was second to just Dwight King (DWIGHT KING!!) on the team.

If you didn't play with Kopitar, you struggled. Before being moved off of the top line, Trevor Lewis was an outstanding +5 in chances. However, after he was shifted away from that line, he was -1 (and failed to be on the ice for another Kings chance). Lewis, Jeff Carter, and Dwight King all played significant minutes with Kopitar. The rest of the team's forwards did not. Coincidentally, the rest of the team's forwards were all minuses in scoring chances at even strength.

For a second consecutive game, the fourth line of the Kings failed to register even a single scoring chance. Earlier in the season, I penned that the Ducks were a one-line team, but I'm not sure I believe that any more. While Getzlaf and Perry will get out-worked possession-wise by the league's elite two-way players on many nights, the depth of the Ducks is a very hearty boost. The Ducks were able to utilize their depth to run over the Kings' spare parts for much of the two-game set they just played. Matt Beleskey and Nick Bonino scored crucial goals in each of the two games, and both of them play in the Ducks' bottom-six.

As for the rest of the forwards, there just isn't much to write about. We need to see more consistent performances out of Richards and Williams and Brown. They need to be making more of an impact. All that we've been able to prove lately is that Anze Kopitar is really great no matter who you throw on his wings. The rest of the team needs to come up with something on a more regular basis.

On the defensive side of things, Jake Muzzin and Drew Doughty turned in their best statistical performance in some time. Each went +4 (+8/-4) in chances at evens. Both wery pretty active in entering the zone, as they combined for 7 entries in the game. Every defenseman got involved in an entry, actually, which is a welcome sight. Lately Willie Mitchell has been considerably more active in the offensive zone. Even Robyn Regehr hasn't looked like a complete mess in this regard. He's almost registered a scoring chance a couple of times lately! Good job Robyn. So close.

The only defender that came up a negative in any metric was Alec Martinez, and his night was given a tragic exclamation point when his elbow exploded upon contacting the Kings' own goalpost. A sad night for everyone's favorite third pairing defenseman.

On the power play, the Kings didn't score a goal but I didn't see the same issues plague their game. It's been an up and down battle for them, but I feel like they've been slowly putting things together. Much less often am I seeing entire games go by without them being able to successfully gain the offensive zone. They generated 5 scoring chances and more than 2 shot attempts per minute while on the play. Both of those are decent figures.

When you flip that around, the Ducks logged less than a shot attempt per minute with the man advantage. The Kings' PK turned in a stellar performance that held them at least somewhat within striking distance. Sort of. Is two goals striking distance? Whatever. Still, strong stuff from the PK.

In a reverse of the previous game against the Ducks, the first goal was weak while the second was merely fluky. Any time a puck trickles through a goalie, he'll tell you exactly what I will: you want it back. There was traffic, yes, but Quick was square to the shot and had the puck hit him. That puck cannot get through.

The main praise in Quick's elite season is that he held the Kings in games despite their lack of scoring touch. He did that by rarely, if EVER, allowing leaky goals like Anaheim's first. Now, he only allowed 2 goals, but the Ducks didn't generate very many shots and even fewer were of high quality. The Kings, again, needed a better performance out of their goalie but didn't get it. Quick's not playing outright bad hockey right now and he's certainly not the biggest concern on the team, but he can be better than this.

Extra Skater has been down from time to time lately, but usually a refresh loads the page for me. So should you get an error, just try again and it will come up quickly. 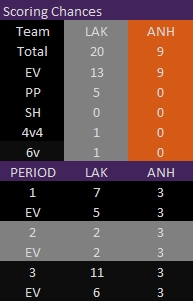 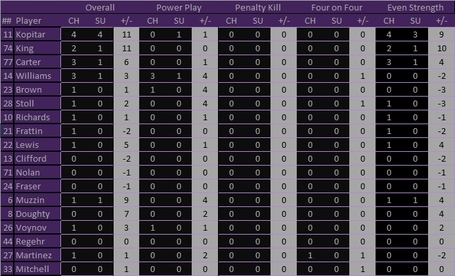 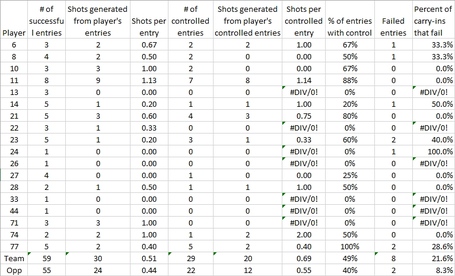