Share All sharing options for: Kings @ Sharks: Numbers and Analysis

It wasn't pretty and it wasn't exciting. Thankfully, the standings don't ask you how you win, just that you do. Given the way that things have gone lately, a game where both teams combined for 18 scoring chances was probably right up LA's alley.

Ultimately it wasn't very different from many losses lately. Aside from really battening down the hatches defensively, they got big-time goaltending from Jon Quick and were able to make one goal stand up.

Success is a relative term in this one. The game was so low-event and so evenly played that it's hard to get a real solid grasp on who drove play forward for the Kings.

The only obvious answer is the top line. Nothing groundbreaking there. Kopitar's line handled tough minutes very well. All three players had heavy hands in moving play up ice, as well. Each player contributed at least 5 zone entries. We won't talk a whole lot about controlled zone entries today, because there weren't many to be had; however, relative to the game, they were very effective at gaining the offensive blue line.

Dwight King's continued run of surprising success didn't take the night off in San Jose. He gained the zone 7 times (second on the team) while leading the team in scoring chance +/- and corsi. He also set up one of his line's 3 scoring chances. The Sharks were also unable to log a single scoring chance against Dwight King. He's been impressive, and this was another strong effort from him. Just to drive the point home: the Kings logged 5 EV scoring chances as a team and were out-chanced by 4. Dwight King was +3. He had a killer night.

Anze Kopitar and Jeff Carter were no slouches, but even they were -1 and even in scoring chances respectively. As the team's lone game-breakers in the offensive zone, it shouldn't come as much of a surprise that these two teamed up for the lone goal in one of the tightest defensive games I've ever watched. Kopitar's slick move around Alex Stalock was reminiscent of his heroic goal against Brian Elliot in the 2012 playoffs. It was the kind of play that very few players can make. More importantly, it was the kind of play that was going to be required for someone to actually score a goal in this game.

Once again, unfortunately, the depth of the Kings failed to come through. The only forward besides Dwight King to come out ahead in scoring chances at evens was Jordan Nolan (+1/0). Pretty much every other forward got beat up a little bit. Again, no big losses, as San Jose registered just 9 chances at evens, but they got better efforts out of their spare parts than the Kings did. Bracken Kearns (BRACKEN KEARNS) was able to log ~*~4~*~ scoring chances of his own. Bracken Kearns is the definition of a spare part. BRACKEN KEARNS.

The main three players that I've been harping on lately have been Mike Richards, Justin Williams, and Dustin Brown. Darryl Sutter opted to throw them together against San Jose on Monday night, and... they disappointed. Again. Williams tied a forwards-worst figure by going -4 in scoring chances. Brown and Richards were -2 and -1 respectively. Williams and Brown were also the worst forwards on the team possession-wise. There's no excuse to be found in their minutes either. Pretty rough game from them.

Not much to be found in the rest of the forwards. Tyler Toffoli was used in an extremely limited role at evens. Kyle Clifford and Jarret Stoll were complete non-factors offensively. A lot of blah. No surprises or positives to be found in the depths of the Kings' roster right now.

Jake Muzzin was the lone Kings defenseman to come out ahead in scoring chances. He was also marginally better than his partner at possessing the puck, leading all defenders with a 60% CF%.

On the flip-side, there's Willie Mitchell. He wa a team-worst -5 in scoring chances and lost the possession battle by a slight amount. He was mostly paired up with Matt Greene, which doesn't strike me as the strongest utilization of either's skillset. This pairing was leaned on heavily by Sutter in the defensive zone, but they were also given ample opportunity to offset that with equal amounts of offensive zone starts.

Other than that, the only thing worth noting is that Robyn Regehr was easily the Kings' least-used defenseman. He and Voynov each received 11.1 minutes of even strength ice time, but Regehr lagged well behind the rest of the defenders overall. Even recent healthy scratch Matt Greene received 3.5 more minutes of overall ice-time.

Either the defenses never let up or the offenses just had nothing in the tank, but neither team was able to do much of anything with their power plays. The most miserable stretch of offensive ineptitude came during LA's four-minute power play with under ten minutes left in regulation. The scoring chances in that stretch were 1-1. Neither scoring chance was of particularly high quality.

San Jose failed to log even a single scoring chance in their 4.3 minutes of power play time. Los Angeles was able to limit them to under a shot attempt per minute. Unfortunately, the Kings were also held to an even lower shot attempt rate. Just a brutal offensive night all around.

Like his Sharks-counterpart, he was untested for the vast majority of the night. However, he was able to come up with a couple of big saves. Most importantly, he didn't let a leaky goal through. Goalies give up bad goals, for sure. It's going to happen. Right now, though, the Kings need everything out of their goalies. If Quick truly is an elite goalie, then this is when he has to show up as one. The Kings played a near perfect game defensively and Quick bailed them out the one or two times that they weren't.

Extra Skater has you covered as almost always. 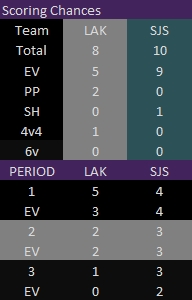 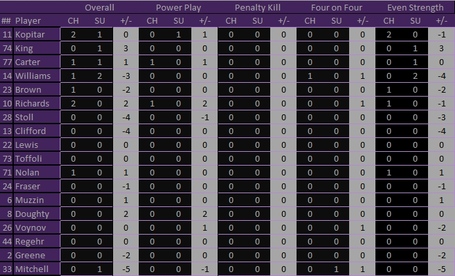 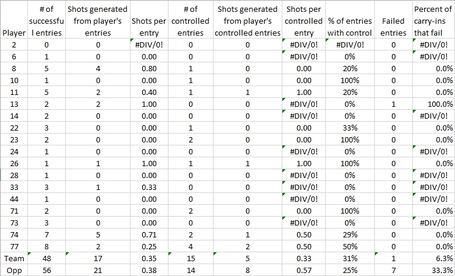