Kings @ Coyotes: The good, the bad and the ugly

Share All sharing options for: Kings @ Coyotes: The good, the bad and the ugly

This game was mostly ugly, but we'll also look at what worked and what was slightly less depressing for LA last night.

Jeff Carter was far and away the Kings best forward last night. He was one of the few among LA’s top players who didn’t come out of the gates flat. He had stellar effort in all three zones and the only area of his game that struggled was the power play. Although, at this point it seems that the power play struggles are more of a systemic problem more than anything.

Carter lead all forwards in ice time at evens. He attempted 7 shots total (most on the team by a wide margin) and registered 4 scoring chances. He also pitched in a strong effort in the neutral zone as he gained the zone with possession of the puck more often than not.

The King-Kopitar-Carter line is definitely not the problem. It’s a line that has a great dynamic in that you have Kopitar, a pass first player who also possesses a dangerous shot, looking to set up Carter with chances wherever he can. Carter lives to shoot the puck. He is among the league leaders in generating shots in the NHL year-in and year-out. Then on the off wing, you have Dwight King, a strong fore-checker who is at his best along the boards and retrieving pucks. His ability to distribute has taken a huge step forward this season, making him a more effective player and has allowed him to stick in the top six.

It has all the ingredients you’d want in a top line combination and I’d like to see the Kings rolling this one despite all of their recent losses.

The only other bright spot was the play of the Regehr-Voynov defensive pair. The backend uncharacteristically struggled in the neutral zone and in their breakouts. Yet, this pair was the only one that did well in those areas. They were strong in denying entries and getting on the puck in the defensive zone. They allowed fewer attempts when they were on ice than any other defensive pair by far and were the only pair that ended the game plus in possession and chances.

LA came out of the gates very flat and although a lot of that had to do with this just being a schedule loss (Phoenix got had a day off before the game, while the Kings were on the second of two back-to-back road games), it was disheartening to watch after finally quashing their recent losing streak the night before.

One thing that put LA even further behind the 8-ball happened before the puck drop. Darryl Sutter decided to go with the ‘hot-hand’ and play Quick in the second of a back-to-back after posting a shutout the night before. Although this is a traditionally acceptable move, recent evidence proves that this is basically never a good idea.

It likely wouldn’t have made a difference, but LA lowered their chances of winning by not starting Martin Jones last night.

Drew Doughty had an uncharacteristically rough night. Part of that has to be blamed on fatigue as Doughty saw 26 minutes of ice time the night before and got another 25 last night. Despite that, Doughty remained a force in the neutral zone. He gained the zone 6 times and gained it with possession 4 of those times.

Still, Phoenix was able to tilt the ice against him and registered an eye-popping 10 chances. That being said, I think this was just a one-off poor effort from Doughty and he’ll be fine going forward. He has been one of the Kings top players and will likely remain so.

After a passable effort against the Sharks, the Mitchell-Greene pair had a miserable night. When they were on ice at evens, the Kings were only able to log one scoring chance while the Coyotes logged eight.

Beyond that they looked lost and indecisive when attempting to get the puck out of the defensive zone. These are the perils of pairing together two defenseman who are not used to handling the puck. This is evidenced by Willie Mitchell being on ice for 5 (FIVE!) icing calls against LA.

The Kings second line of Dustin Brown-Mike Richards-Justin Williams was a disaster. When Dustin Brown was on ice at evens the Kings were only able to attempt 8 shots, while Phoenix attempted 17 (!). That’s even worse when you consider that LA was trailing the entire game.

Brown-Richards-Williams getting heavily out-chanced and dominated in possession in a blowout loss is definitely concerning. The Kings biggest problem this season has been depth. Beyond Anze Kopitar, every other center on the Kings is in the red in possession numbers relative to the team.

Another thing that was ugly was the power play, but that goes without saying at this point. The Kings only managed 1 shot, 4 attempts and 0 scoring chances in 4 minutes of power play time. 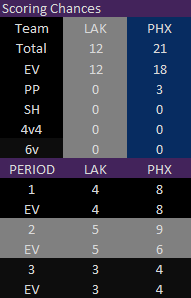 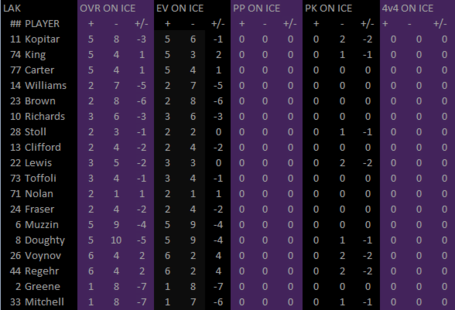 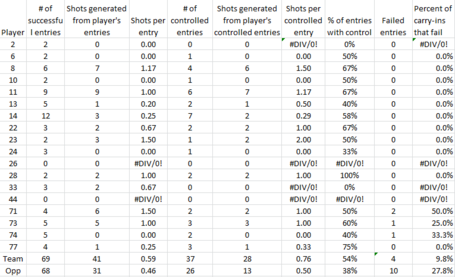