The Kings are still a very good team and will win lots of games soon.

Share All sharing options for: The Kings are still a very good team and will win lots of games soon.

In a recent article, our SBN colleague, Eric T. reviewed the process of trying to quantify the importance of shot differential in the NHL.

As we’ve touched on many times, the Kings are an elite team when it comes to shot based metrics. In fact even after their recent skid, the Kings still lead the league in possession numbers.

Gabe Desjardins has also looked into this by yet another method, using the observed results and probability calculations to estimate the skill component. I don't think he compiled his results in a single post, but we can tease it out from comments he made in a few places:

In that same article, Gabe said that Corsi and luck combine for 3/4 of winning, and he has shown that luck alone is about 38 percent. So we can infer that he estimates Corsi to be about 37 percent of winning -- about 3-4 times as important as shooting and goaltending combined.

So to break that down:

Before their recent skid the Kings were on pace to shatter their franchise record of most points in a season. At Christmas break, they were 25-9-4. That is about a 113 point pace over a full season. Since Christmas, they are 5-10-2 and have fallen to a 98 point pace.

My sense is that the Kings are neither a 113 point team, nor are they a 98 point team. Their true talent likely lies somewhere in the middle.

That being said, let’s take a look at the 5 factors that drive wins in order to gauge where the Kings stand and what might be behind their recent string of losses.

Going into the skid the Kings lead the league in team save percentage. Since then, they have dropped to second place (both at all strengths and 5v5).

Their 5v5 goaltending on the year is at .939. Over their 17 game funk, that percentage dipped a little, as they posted a .926 save percentage over that period. .926 would still be good for 9th best in the NHL, so even though there has been a bit of regression, goaltending has been far from the problem.

It’d be pretty safe to make a bet that the Kings shooting talent is lower than league average. Coming into this season only Anze Kopitar, Mike Richards and Jeff Carter have posted above average shooting percentages over their career at 5v5 among forwards with a substantial sample size.

The Kings system also seems to create fewer quality chances overall. If you look at the percentage of shots that come from the scoring chance area, they are at the bottom of the NHL over the last three seasons.

Of the shots that make it to the goaltender, NHL teams are able to get 43% of their shots off from within the scoring chance area. Over the past three seasons, the Kings have only managed to get 39% off from home plate.

The interesting thing is that the Kings have actually improved on those numbers this season. They have managed to get 42% of their shots off from the scoring chance area so far this season. That is still slightly below league average, but doesn’t really explain the huge drop off in the Kings shooting percentage.

In fact, over the Kings last 10 games, the Kings’ ability to get shots off from the scoring chance area has stayed around where it has all season long—43%.

It doesn’t appear that the Kings recent funk can be blamed on shot quality.

With a 84.4% penalty kill %, the Kings have the 6th best penalty kill in the NHL. One thing that is alarming about the Kings PK is that although they have had solid goaltending while shorthanded, they have allowed a ton of shots.

Over their last 17 games, they have performed substantially worse in both of those areas. Whereas they’ve allowed 50.1 shots against on the penalty kill per 60 minutes on the year, they’ve been even worse since Christmas having allowed 53.9. 53.9 would put them in the bottom 10 penalty killing units in the NHL.

As we noted above, they have received solid goaltending in shorthanded situations on the year. With a .892 save percentage they are 9th best in the NHL. Over their 17 game slide, their numbers have improved slightly at .897.

Goaltenders have been propping up what has been a below average penalty killing unit on the year.

LA has the 3rd worst power play in the NHL. They have only been able to convert on 13.8% of their power plays and are only shooting 8.39%. To put into perspective how poor that shooting percentage is, consider that there are 6 teams that are shooting better than that at even strength.

What gives? Are the Kings defensemen shooting too much resulting in too many shots from the point? Are they taking poor shots in general? Are they just not shooting enough period?

LA defensemen do in fact take a rather high percentage of shots on the power play.

LA defensemen do in fact take a rather high percentage of shots on the power play. 37% of all of their shots have come from back-enders. That is significantly higher than the league’s best power play units in Pittsburgh and Washington. Those two teams get 26% of their shots from defensemen.

That hasn’t really affected shot distance. In comparing the three teams (using away games to mitigate scorer bias), it doesn’t look like the Kings take more shots from further out. Pittsburgh has an average shot distance of 31.5 feet, while the Kings and Capitals are both at 34.8.

What about shot quality? Are the Kings struggling to get shots off from the scoring chance area?

Well, compared to the top two power play teams in the league, not really. Pittsburgh has an insanely high percentage of shots from close in. 53% of their shots have come from home plate on the power play. Washington is at 45%. The Kings are right between the two at 48%.

Although, it seems as if LA has been having a hard time getting to the "tough areas" on the power play, the numbers don’t really bear this out.

As far as being able to produce shots on goal, the Kings have been around average this season and is likely the main culprit of their ineptitude.

Among forwards, the Kings have allocated most of their time to Anze Kopitar, Mike Richards, Jeff Carter, Justin Williams and Dustin Brown. Only one of those players (Jeff Carter, obviously) is in the top 40 in being able to produce shots.

The Kings need to figure out a way to get more shot production from their guys up front on the power play.

The Kings are the strongest puck possession team in the NHL. They currently lead the league with a 56.9% Corsi percentage. That would also be the 3rd best mark of the #fancystat era (which started in ’07-08). Going into this year there have been 4 teams that had a Corsi percentage higher than 56%. 2 have won the Stanley Cup, 1 lost in the Final and the other made it to the Conference Finals.

The Kings have been a dominant puck possession team the last couple of years. How do they do it?

That's all well and good, but how has LA fared over this 17 game downturn?

Over that period and in close game situations, the Kings have churned out a 57.5%. They have actually improved their possession numbers despite the recent funk.

Among the factors within a team’s control, puck possession is the most important. No other factor is more predictive of future wins.

At their core, the Kings have continued to be a dominant possession team. Above all else, this is a sign that things aren’t broken or that the team needs a makeover. It is still the same elite team that won the Stanley Cup 2 seasons ago, made the Western Conference Finals last year and is 70-40-14 since the acquisition of Jeff Carter.

The Kings haven’t been doing so hot in the luck department. 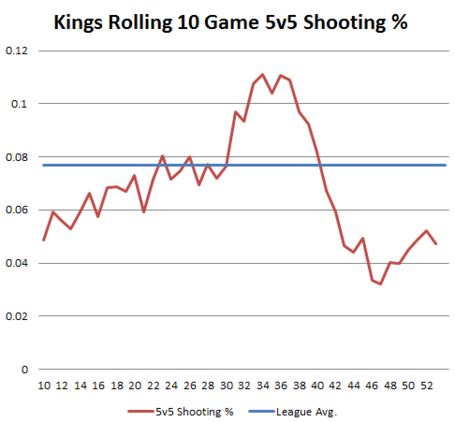 Many have claimed that the Kings are not converting due to too many poor quality shots, yet Gabe Desjarins has shown, shot quality is actually only a tiny sliver of shooting percentage. In other words, just because you get a large number of quality shots does not mean that you will automatically register a higher shooting percentage (or vice versa).

Further, as we’ve shown above, it isn’t even the case that the Kings have been suffering from poor shot quality this season. They are league average in getting shots off from the most dangerous areas of the ice. And despite that, they have only converted shots from the scoring chance area into goals 9% over their last 17 games. League average is 14%.

More than anything the Kings goal scoring woes of late have been caused by extremely bad luck with regard to shooting percentage. And while it is possible that they have a lower than average true shooting percentage based on systemic issues and individual shooting talent, that is 4 to 5 times less important than their league leading shot differential.

Are there areas in which the Kings have room for improvement? Yes. Obviously their special teams are in shambles and perhaps they could mitigate some of their poor shooting talent by giving someone like Tyler Toffoli more ice time. But these are minor factors as compared to their elite puck possession prowess.

It’s not time to panic, there are plenty of wins on the horizon for the Kings.