Kings Clips: Defending the Outdoor Game and Searching for Offense

Share All sharing options for: Kings Clips: Defending the Outdoor Game and Searching for Offense

We'll start off today's links with a monologue, because I might as well use this space to defend California hockey, right?

SB Nation sent a writer to Saturday's Kings-Ducks outdoor matchup, as well as last night's Rangers-Islanders matchup. Both of them had good takes on what went right and what went wrong at each event. The passage which stuck with me was from the end of Travis Hughes' piece on the Yankee Stadium game:

Millions might watch these games on TV this season, and many of them will get bored by it, if they aren't already. The Winter Classic is a made-for-TV event, sold to a national audience, played on a national holiday by a nationally (or internationally) relevant pair of teams. The Heritage Classic is the same for a Canadian audience.

The Stadium Series is not. It's a locally-relevant, locally-hyped, locally-enjoyed event. It doesn't matter if Tony in Philadelphia calls into sports radio and thinks it's tired, because Tony in Philadelphia is not in New York. He wasn't in the Stadium on Wednesday night, or in Dodger Stadium over the weekend. The Stadium Series is for the people who were. They understand it differently, as of course they would.

That's certainly true, and thank goodness it is, because Saturday's game was objectively kind of dull. But maybe there's something to be said for fans who were there, as opposed to people who were there. Bill Hanstock (who covered the game at Dodger Stadium) was a neutral observer, and as such, he focused a lot more on the pageantry and spectacle of the game as opposed to what it meant to a California fan. And the contrast between the NHL's desire to make this a made-for-TV event (yoga and volleyball? fake palm trees?) and Travis' point that the Stadium Series should NOT be a made-for-TV event led to a slightly negative opinion.

The first outdoor ice hockey spectacle in Southern California doubled down on "spectacle." A look at the good and the bad of manufacturing an experience.

People are beginning to fear that the NHL is overdoing it with the outdoor games. A lot of those people probably haven't been to an outdoor game.

On the other hand, he couldn't have known what it was like to see Anze Kopitar take a penalty shot at Dodger Stadium when three years ago, most of LA wouldn't have known who Kopitar was if he was wearing his jersey and skating down Wilshire Blvd. Maybe those outside of Southern California saw the event as a bit of a dud, but for two underappreciated fan bases, it was a reward for all those bandwagon and warm-weather jokes. When the Dodger Stadium sunset faded into the night and Wayne Gretzky walked out of centerfield? It was perfect. Even with the Kings doing their frustrating "we're gonna do everything but score!" routine, it was memorable. And when the headline for the recap article starts with "Beach volleyball, fireworks and KISS," maybe we're missing the point.

What I'm getting at is, Kings and Ducks fans don't care that the NHL was shoving the beach theme in our face, or that KISS had microphone issues, or that the stadium ran out of beer. (Actually, maybe they do care about that last one.) They were just thrilled to see hockey given the kind of stage it deserves in SoCal. And my goodness, how great were Vin Scully and Bob Miller together?

Now, to the links. 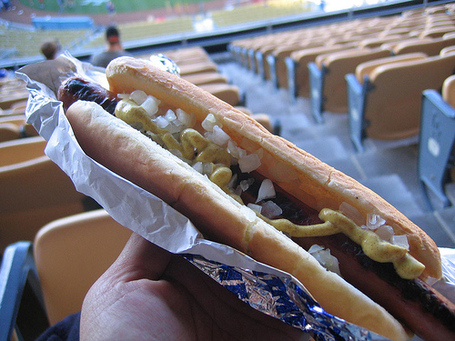