It is very easy to get mired in the muck during an extended losing streak. So let's not.

Share All sharing options for: Kings @ Blues: Positives and Analysis

ARobert posted his illuminating piece on the state of the Kings during their 5-game streak yesterday. You all should read it if you have not already. If you don't want to, suffice to say, I agree with his overall assessment. The Kings are not playing *bad* hockey right now. They're playing largely good hockey and getting undone by a few factors that should be correctable. I also agree with Jim Fox that the timing of some of these mistakes is absolutely inexcusable. Bad timing is always more identifiable in hindsight, but these instances seemed pretty obvious as they were happening.

Like I said, though, I think the Kings are playing well to a certain point. I think it's important to stay focused on that as a fanbase because sports should be fun and not a chore. Yes, the game got away from the Kings and became as much of a hassle to watch as it probably was to play. Yes, the third period was very mediocre again, and this has been a theme in the past few games. No, the Kings did not score a goal and that is a very real concern for a team that has often struggled to finish its chances. No, I don't believe any of these themes will plague the team very often.

Robert broke down the pure numbers from the losing streak already: the Kings really aren't playing that bad. One thing he didn't do was look at was the schedule. The first game of the streak was the tail-end of a hellish run through multiple back-to-backs, extended travel and nearly no rest. The second game is the only one to be upset about, and it was a result of some sub-average goaltending from Ben Scrivens. The third game was against the best team anyone has seen in the salary cap era (and it was only by a goal). The fourth game was their third in four nights and second in a row. Their fifth was ALSO their third in four nights and came in an elite team's home city. Yes, it's a worst-case scenario, but I think if you look at each game individually (except the Nashville game, which was probably a must-have during this stretch anyway), the losses make some sense.

If you would've told me before the season that the Kings would lose a game to Chicago on the road by a goal then again the next night to a good possession team by a goal then again two nights later against an elite possession team, I would've said that such a thing made a lot of sense. Again, the only really upsetting loss is the Nashville game. We're all probably much more upbeat about this team right now if they win that game. It's a 3-game losing streak instead of a 5-gamer. The losses that surround it don't really concern me.

Anyway, on to the game itself. Keeping with the theme of silver linings, let's take a look at the things we can be proud of in St. Louis.

The overall game was not overwhelmingly fun, but the first period was downright dominant. The Kings led chances 8-2 (4-2 EV) at the end of the first and actually followed it up with a decent second (7-5, 4-2 EV for STL). The third period was so score effected for the last 14 minutes that both teams skated rather listlessly. I often compare score effects to a stoplight: When you see a green light and you're sure you'll make it, you go straight forward without extra effort. If you're unsure that you'll make it, you push hard and go faster. However, both the Kings and the Blues saw a red light when the game went to 5-0 and coasted to a standstill. 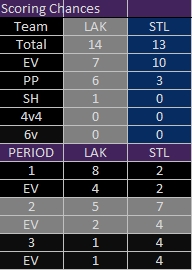 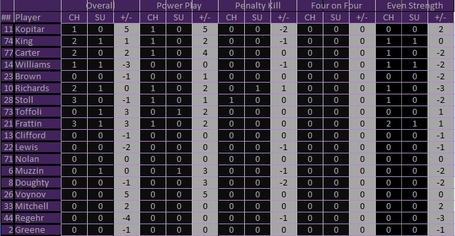