It's been rumored that the Islanders are looking to sell defenseman Andrew MacDonald at the deadline. Should LA be looking to buy?

With the Olympic trade freeze recently lifted, Kings' fans - and Dean Lombardi - turn their attention to players available on the market. We've already established what the Kings' should reasonably be looking for at the trade deadline in return for several of their assets. Our focus now shifts to what the Kings should be seeking.

Get the latest rumors, news & analysis

Full trade deadline coverage from SBNation.com and our network of team-specific blogs.

As I mentioned in this post before, the Kings have been linked to a few different types of players. Among those archetypes is another "stabilizing" top-4 defenseman. Read a different way: trading for Robyn Regehr was so much fun that the Kings want to do it again! Robert analyzed what Regehr would bring to the table last year. Today we're going to look at Andrew MacDonald, as rumors have swirled that the Kings are interested.

What we're going to look at with Andrew MacDonald is Corsi. If you're new to the site or just unfamiliar with Corsi, Robert has written an excellent primer on the topic here. Basically, Corsi is a very strong measure of puck possession. Ideally you'd like to be at or above 50%, as that means your team has the puck more than half the time. On a general level, Corsi tends to range between 40% (awful) and 60% (amazing).

With the 9th-worst Corsi% in the league among defenders, even the most rudimentary analyst should be able to figure out that something has gone amiss here. The only players worse than him in the entire league play for possession luminaries like Toronto and Edmonton and Buffalo. While the Islanders are certainly not a good team, their possession numbers as a team are clearly out of the basement. MacDonald is the only Islander in the bottom fifty defenders (with 44+ games) in the league in terms of Corsi.

Corsi does not tell the whole story on its own, though. Perhaps he is just being bogged down by tough deployment and competition. He has indeed received tough deployment, the toughest among defenders on the Islanders. When we look at just his end-zone starts (so, excluding his shifts that start in the neutral zone), he starts in the offensive zone just 46.7% of the time. That's the 33rd lowest figure in the league.

His deployment and competition are definitively tough. How are other defensemen faring in similar minutes?

Well, that's not good. Defenders being used almost exactly like Andrew MacDonald are out-performing him across the board. By a significant margin. In fact, one of the critical names on that list is Jack Johnson. Prior to the Kings making their incredible run to the Stanley Cup, they improved their roster by ridding themselves of the possession black hole that Johnson was at the time. Now he is out-performing MacDonald in nearly the same role.

Not so much. Capuano has actually used them more often than he's used any other defensive pairing this season. If they're being used in the same minutes, why are their numbers so significantly different? Perhaps it's because every single player on the Islanders' roster except for Matt Carkner has better numbers away from MacDonald than they do with him. Take a look at how the players with at least 200 minutes of ice-time perform with and without him: 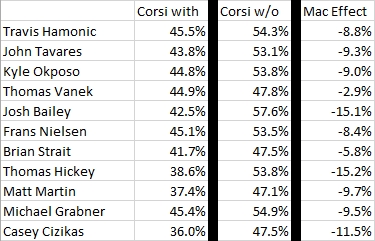 WOWYs are always kind of troubling because we don't know exactly how these players are being used with and without him. However, Hamonic's numbers being considerably better in nearly identical minutes forces you to take a harder look at the overall picture and the overall picture is not a pretty one. The Isles are very simply a better team without MacDonald the ice. It isn't close.

The Kings proved this season that they can be successful even with an anchor weighing down their back-end. I have no doubt that they could withstand two, so I doubt trading for MacDonald breaks their season. On the other hand, the fact that it's even a question should rule the trade out for the Kings. There is not a single good reason to trade for him. He's weighed down excellent players, and he would do the same in Los Angeles. In a scenario where the Kings trade for MacDonald, the best possible outcome is that he doesn't completely ruin the roster. That's it. That is not a situation you should trade for.

VERDICT: The Chicago Blackhawks should trade for him and pair him with Duncan Keith.