Analyzing Kings Trade Rumors: What would Sam Gagner bring to the table?

Share All sharing options for: Analyzing Kings Trade Rumors: What would Sam Gagner bring to the table?

According to Elliotte Friedman of Hockey Night in Canada, the Kings may be interested in acquiring Sam Gagner of the Edmonton Oilers. Also, Bob McKenzie recently brought up Gagner as a player the Kings maybe interested in. Those two are heavyweights in the hockey news world, so it's likely that there is some substance to this rumor.

Who is Sam Gagner and what would he bring to the table for the Kings?

Gagner was the 6th overall pick in the 2007 draft. At 18, he jumped straight to the NHL and scored 49 points in 79 games in his 07-08 rookie campaign. He’s never been able to top that point total but has averaged 0.61 points per game over his career. 0.61 points per game would equal 50 points over a full 82 game season.

Watch: Sam Gagner owns the Blackhawks which is the #1 reason to trade for him

At 5’ 11", he is an undersized center who still has some ways to go in his development in the defensive end. He wouldn’t be the prototypical center within the Lombardi/ Sutter organizational philosophy. He is an offense first, puck distributor who lacks a big shot. He also struggles in the faceoff dot and is prone to lapses in the d-zone which has frustrated many:

"He’s gifted offensively at 5v5 – the Oilers have shot 9.1% on the ice at 5v5 over the course of his career. He just seems unable or unwilling to do the things that would let him really take advantage of that by getting to the point where the Oilers get 51% or 52% of the shots with him on the ice."

Indeed, he has struggled to push the needle forward in the possession game. This season the Oilers have only been able to own 44% of all shots while Gagner has been on ice at evens. His numbers were even worse a season ago. Interestingly, this has been more of a recent trend for Gagner. In his first 5 seasons, he had positive possession numbers relative to his teammates in each season. In his best years, he was centering Dustin Penner and Ales Hemsky which helped boost his possession numbers.

Obviously, his numbers from recent years are going to be affected by playing on a very poor possession team, but what effect has he had on his more recent linemates? 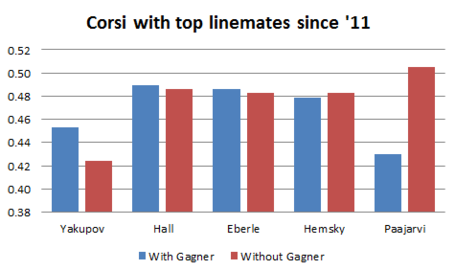 The results are a real mixed bag. While Nail Yakupov’s numbers have received a boost with Gagner, Hall, Eberle and Hemsky's are neutral, and Magnus Paajarvi’s were dramatically suppressed. It seems to be apparent that Gagner is not a guy that you can rely on to drive play.

The Kings are typically interested in forwards that are able to push the play forward or at least plug up the ice so that very little happens. Gagner is neither of these. But he would offer play-making ability down the middle among the bottom six. And his positive possession numbers from earlier in his career are a sign that if he is surrounded by the right players he can get the puck moving the right way.

Copper and Blue had some interesting comparables for Gagner heading into this season.

And if that happens he has the potential to put a lot of points on the board. Gagner has struggled to live up to lofty expectations over his young career, but it is still important to point out that he is 29th scoring among active players in games played where they were 24 and younger. Among the forwards who played 100 games by the time they've reached 24, Gagner is 75th out of 300 in points per game.

Additionally, over the past three seasons when Gagner has been on the ice, 50% of the Oilers shots at even strength have come from the scoring chance area*. League average is 43%. That number is out-of-sight when compared to the Kings current third line center, Jarret Stoll. When Stoll has been on ice over that same period, just 38% of the Kings shots have come from the most dangerous area of the ice. There is little doubt that Gagner would be a substantial upgrade over Stoll in his offensive contributions.

It would make the most sense that if the Kings were in fact to chase Gagner, that he would take over Stoll’s job as the third line center. First off, it would be difficult for LA to be able to carry both Stoll and Gagner’s contracts. Gagner is make $4.8M until 2016. Stoll is making $3.2M until next year. Second, a big problem for the Kings right now is depth scoring. Stoll has managed just 19 goals over his last 179 games and a 0.32 point per game pace. 0.32 points per game over a full 82 games would be a paltry 26 points.

Gagner would provide a huge boost offensively over Stoll yet give up some defensively (Stoll has been on-ice for 8.5 shots against per 20 at 5v5, while Gagner has been on for 11). What is odd about this rumor is that, giving up a little defensively is something the Kings have been pretty vocal about being wary of in the past.

Outside of taking over the third line center job there is another option if they are uncomfortable with Gagner's defensive shortcomings. Despite playing his career nearly exclusively at center, Gagner’s struggles both in the development of his 200 ft. game and being able to produce offensively since attempting to come back from a serious jaw injury have lead the Oilers to recently try him at right wing.

This scenario would be strange considering there are plenty of options on the trade market with far more experience at wing outside of Gagner. These options would include people like Hemsky and Matt Moulson. On the other hand, it may be something they’d be willing to try in order to have Gagner play this season at wing and then perhaps eventually take over the third line center job from Stoll in the future.

Whatever the case maybe, the rumor is interesting in that Gagner is a shift from the type of player the Kings are usually interested in. There is no word on what the price would be to acquire him, but it would make sense that the Oilers would be interested in acquiring some size. The Kings certainly have no lack for that with Dwight King, Jordan Nolan and Kyle Clifford on the roster.

What do you think? What would you give up for Gagner? Is Gagner’s offensive ability worth the risk or should the Kings look elsewhere?

*data via Super Shot Search and using away games only to mitigate scorer bias.