LA overcomes an early 2-0 deficit and looks dominant for a large part of the game, but Phoenix gets two in the third to win it at Staples.

If you responded to this loss by drinking heavily: number one, Happy St. Patrick's Day, and number two, please, hold the drunk comments. Because after a predictable early rash of chances gave way to a predictable goal against, the Kings predictably charged back... until something unpredictable happened. They blew a third period lead.

The Kings got off to a great start despite being unable to find a goal; LA outchanced Phoenix 7-2 in the first despite really controlling only five minutes of the action. Mike Smith made a great save on Justin Williams, and Drew Doughty flubbed an open shot on the rebound. The Kings immediately went on a power play, during which Smith made three more saves and Kopitar's shot went off the post. So it was inevitable that the Coyotes would score soon after, and they did so thanks to a nice effort from Rob Klinkhammer. Radim Vrbata's wrist shot was heading well off course, but Klinkhammer tipped it down into Jonathan Quick and was able to convert the rebound.

One minute after the Kings got Klinkhammered, they gave up another goal. Left with a lot of room in the slot, Mikkel Boedker backhanded one past Quick off of a feed from Oliver Ekman-Larsson. The Coyotes actually followed up that power play tally with a good stretch of play, making it appear unlikely that the Kings would get one back in the first. Tanner Pearson did just that, though, using a burst of speed to find space down the wing and roof one past Smith. Pearson's second goal of the season put the score at 2-1 after one.

The Kings followed up with one of their best periods of the season. Or the Coyotes followed up with one of their worst. Maybe both? At any rate, LA got two terrific scoring chances in the opening minute of the second and never looked back. Though Mike Richards' tip went wide and Justin Williams' shot was denied, the Kings kept coming, and 6:50 in they tied the game. Jeff Carter dragged the puck around the net and back up towards Alec Martinez, who... BANG. Smith didn't have a chance. 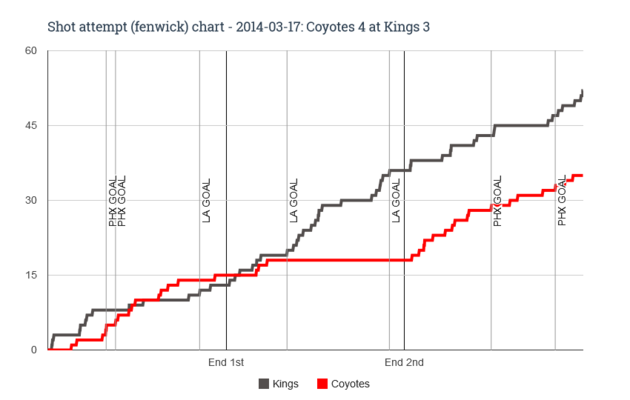 As you can see in the above chart, the Kings got the next 17 shot attempts after Martinez scored. SEVENTEEN. The seventeenth attempt was off the stick of Marian Gaborik, and that shot went off the stick of Derek Morris and beat Smith to make it a 3-2 game after 40 minutes. That leads to the stat you've already (probably) heard:

Entering tonight, @LAKings were 126-1-11 in last 138 reg. season games when leading after 2. The #Coyotes changed that. #HungrierThanEver

So it happened tonight. The Kings were 21-0-0 this season when leading after two periods, but Phoenix didn't even need overtime to come back for the win. After Matt Greene's clearing attempt was stopped at the blue line, Keith Yandle scored on a long slapper to tie the game, and there was no screen or distraction. Quick saw it all the way, but the puck caught a sizable chunk of his glove and went in. The Coyotes got the better of the rest of the game, and Quick would've had to stand on his head to keep Phoenix out. He nearly did. A remarkable double-save on Jeff Halpern and Shane Doan had the Staples crowd on their feet... until the replays showed that Quick's stick save on Halpern was one foot behind the goal line. 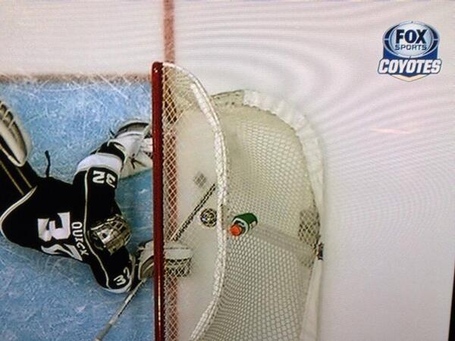 The Coyotes held on for a 4-3 win, and the Kings went to their third straight loss. The problems have been different in each of the three losses, as have the successes. Regardless, the Kings have games against Washington and Florida this week, and wins in both would go a long way in salvaging the homestand and solidifying that #3 spot in the Pacific Division.