How Have the Kings Fared Since the Break?

With a look at both traditional fancystats and microstats like zone entries and scoring chances, we can get a pretty good idea of just how well the Kings are playing since the Olympics ended.

Share All sharing options for: How Have the Kings Fared Since the Break?

It's easy to look at a team that's 7-3 since the break and say, "hey this is a good team." Which the Kings are. There isn't much argument about it, even including a three-game blip on the radar that's largely driven by poor goaltending from Jonathan Quick. My long-term concerns about him aside, there isn't much to worry about there. He's been very good since returning from his groin injury, and likely will not be the hole that sinks the Kings' ship, should it go down.

So just who has excelled for the Kings? How have they been used? How good (or...bad?) has Marian Gaborik been since joining the Kings? Let's find out!

The first thing we should do before getting into production numbers is establish usage patterns. How are Kings players being deployed? When I was doing the game-by-game analysis, we pretty much established that Sutter likes to go power vs. power. For the most part, opposing coaches didn't deviate from that plan themselves. Kopitar received the toughest minutes, followed quickly behind by Richards, then Stoll, then Fraser/Vey/Lewis. Has much changed?

Not really. In fact, if anything, Kopitar's minutes have gotten even more harsh. In his past 10 games, he's started in the offensive zone less often than the defensive zone. If you go here and scroll down to "Usage" then sort it by O/Dst%, you'll see that not a single King has started more of his shifts in the defensive zone than the offensive zone throughout the season. Now, in any 10-game sample, you'll get outliers, but that's where Kopitar sits right now. Sutter has poured weight on Kopitar's shoulders and he's continued to shrug it off. Here's how every King has been deployed since the Olympic break:

As you can see, no real surprises. Generally speaking, Sutter has used his better players in tougher roles and his worse players in sheltered roles. One person worth noting there is Tanner Pearson, who I'll cover a bit more further along in this post. His minutes have been surprisingly tough. Doughty and Muzzin are another outlier, but that's because Sutter's actually gotten commendable performances from his bottom two pairings. Since the bottom four defenders finally stabilized a bit (unsurprisingly this coincides with Martinez entering the lineup for Greene), he's been free to use his offensively gifted defenseman in softer roles.

In fact, all four of Alec Martinez, Willie Mitchell, Slava Voynov, and Robyn Regehr have received as many or more defensive zone starts as offensive ones in the past ten games. On top of that, all four have excelled in terms of possession and scoring chances. In just two games, Matt Greene has struggled mightily, particularly when compared with his teammates. I don't think we've seen the last of healthy scratch Matt Greene. Take a look at how all of the Kings have fared in terms of possession and chances (with O/Dst% attached as well): 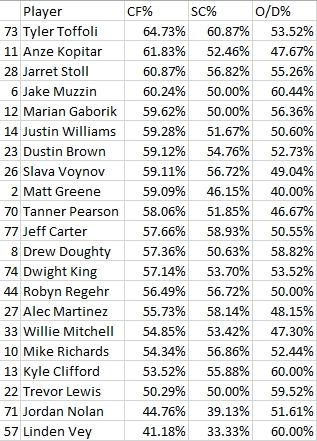 Despite very, very tough minutes, Voynov and Regehr have managed to control 56.72% of scoring chances at evens. Martinez and Mitchell have been very, very reliable as well. The real positive to take from his table is that just about every single King is excelling in a dramatic way. The only two that aren't are Linden Vey (who we'll excuse due to sample size) and Jordan Nolan. Aside from an interesting start to the season that made me a bit optimistic about him, Nolan has been terrible. Sutter has used him in a way that protects his minutes and limits the collateral damage that he can cause, but he's been a true pox to the Kings roster.

The other player I'd like to point out on that list is Tanner Pearson. Again. He looks pretty darn decent, doesn't he?

One of the things that we (and others) have written about in the past two seasons, since we began tracking zone entries, is how infrequently the Kings carry the puck into the zone. How has this held up during the past 10 games? Below I'll attach zone entry numbers for each King. First column is entries per 60 minutes, next is the percentage of their zone entries with control, then shots per zone entry, and finally the percentage of carry-in attempts that fail. 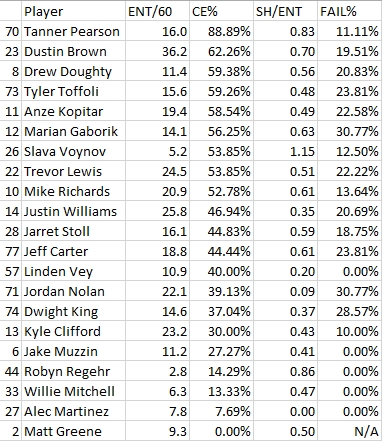 There it is. Tanner Pearson has been alarmingly strong since returning to the Kings lineup. It hasn't bared out in a ton of goals yet, but good things are coming for him. He is driving play, he looks much more confident with the puck, and it's translating into on ice results. This isn't just a numbers thing, he is considerably more visible on the ice. He's making quick decisions, moving his feet much more, and looking considerably more comfortable in this league than he did earlier in the season. It wasn't that long ago that I was suggesting he be the piece the Kings deal in a deadline pickup, but he has proven me wrong since returning to the lineup. Hopefully it continues.

Other than that, those controlled entry numbers seem almost respectable, don't they? In this ten game stretch, the Kings have carried the puck in at a 49% clip, compared to 44% for the season. Some of that is influenced by weak competition (CGY x 2, EDM, ANH), but there seems to be a clear effort to dump the puck in less, or at least to take what is given a bit more often. Mike Richards, Slava Voynov, Dustin Brown and the aforementioned Pearson are not just entering the zone with control more often, but challenging defenders to do so. This is where players like Kopitar, Doughty, and early season Linden Vey were excelling while other Kings were not. They weren't just controlling the puck over the line, but were challenging and backing off defenders that were trying to hold the blue line. 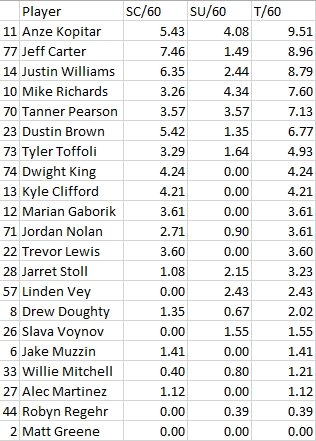 Again, look at Tanner Pearson! Comfortably in the top six of late.

It's mostly what you'd expect, except for Marian Gaborik, who has not yet gotten comfortable in his role at even strength. His zone entry numbers are respectable, but his offense has been lackluster thus far. With that said, he has looked better lately, and his power play numbers are considerably more exciting. I suspect he will look better and better as we move along.

So how have the Kings fared since the break? Extremely well. Only Jordan Nolan looks bad, and that is now a season-long theme. Since the first 10 games of the season, he has been pretty close to an unmitigated disaster. His possession numbers are bad, his chance numbers are even worse, he drags down his teammates for the most part, and he's also turned into a turnover machine at the blue line. I suspect that Linden Vey will get an extended look at replacing him on the fourth line once he makes his return to Los Angeles. I also suspect that Nolan will find a comfortable seat in the press box come playoff time.

Robert wrote about the Kings' losing streak yesterday, and I really can't stress enough how right his conclusion is: the Kings are a very good hockey team. They may actually be in the midst of one of their strongest stretches of play this season. They have been a tiny bit unlucky over their past few games, but they are more than fine moving forward.