Jeff Carter scores, and the Kings hold off the Flyers in a wild affair.

Disallowed goals? Controversial calls? Wild scrambles? Posts and crossbars? This game had EVERYTHING... including Jeff Carter sticking it to his old city. Read all about it!

Not much happened in the first period. The Los Angeles Kings had a clear focus early: get the puck to the net and drive it. Ray Emery was in net for the Philadelphia Flyers, and he's not a guy who's easily intimidated. But the strategy of pressuring the front made Philadelphia look shaky early on. And with Emery struggling a bit...

... it seemed like the plan would pay off eventually. Also, Flyers fans booed Jeff Carter and Mike Richards every time they touched the puck. Moving on!

Jonathan Quick was reasonably active early on as well, stopping 18 shots through the first 40 minutes. He was tested more in the second than in the first, and had to make good saves in close on Sean Couturier and Scott Hartnell. Quick's rebound control: pretty good. Meanwhile, the Kings took 19 shots in the second period alone, and they beat Emery three times... though only two counted. First, you knew that one of Carter or Richards was going to find the net, and to no one's surprise, it was Carter. A long shot by Alec Martinez deflected off Mark Streit to Carter, who had an open net and found it.

The Flyers looked to have tied the game just a minute later, when Vincent Lecavalier had an open net of his own. The goal light went on, the horn sounded, and the fans celebrated, but somehow, Lecavalier's shot had hit both posts and the crossbar without going in. Each team followed that near-miss up with several scoring chances over the next ten minutes. The Kings then got a power play courtesy of Zac Rinaldo, and it was their turn to be disappointed after an apparent goal. Why? Alec Martinez looked to have continued his torrid play with his tenth goal of the season, but Carter was penalized for what was somehow deemed a cross-check.

LA moved on from that and eventually did find a second goal later in the period, thanks to Emery's aforementioned rebound troubles. Robyn Regehr took a long slap shot which Emery couldn't control, and Justin Williams chipped in the rebound. Quick snagged Mark Streit's own blast with his glove to keep the game 2-0 heading into intermission, and the Kings were in business. However, the first shot of the third period went into the Kings' goal. Matt Read tipped a shot by Brayden Coburn, and it went off Jake Muzzin and in, because that seems to happen a lot these days. That set up a potentially frantic final 19:31.

And man, was it ever frantic. Jim Fox ranted about the refs after Zac Rinaldo went after Mike Richards and the referees evened it up with two minutes for Kyle Clifford, but the way the power play looked during their two third period opportunities, it didn't really matter. In between those power plays, we saw back-and-forth action. The Kings had looked to survive the worst of it, but Jakub Voracek got behind Slava Voynov and skillfully tipped in a Hartnell shot to tie the game. Two minutes later, the Kings got their one-goal lead right back, as Voynov made up for it by setting up Dwight King on a 2-on-1.

The Flyers would attempt 15 more shots in the final ten minutes of the game, and upped the pressure more and more as the clock wound down... 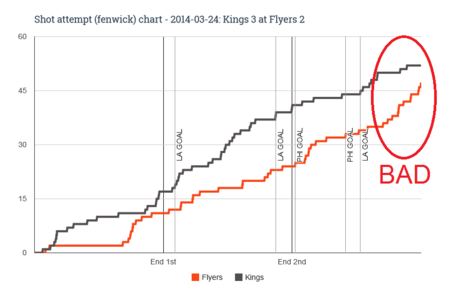 ... but Quick and the Kings survived. Though they caused a number of ulcers in the process. Each team remains sixth in their respective conference; the Flyers fail to overtake the New York Rangers in the East, while the Kings edged slightly closer to the Colorado Avalanche in the West. Despite being down in the standings, each team is playing great hockey right now, and it'd be pretty fantastic if they could both keep it going in the playoffs. If that happens, we can decide who won the trade for once and for all.