This Week in Underlying Numbers: Anatomy of a Win Streak

As I said at the tail end of the Kings' 3-game losing streak: the Kings are playing some of their best hockey of the season right now.

Share All sharing options for: This Week in Underlying Numbers: Anatomy of a Win Streak

Like we said, the Kings are pretty good at hockey.

When the Kings lost a heartbreaker (mostly on the back of Jonathan Quick) against Phoenix, JFTC once again turned into a support group and we all had to remind you that the Kings were still 8-3 in their past 11 and playing pretty darn well. For once, the Kings paid us immediate homage by winning their next four games.

To get this out of the way: yes, their competition has been weak. Thankfully, the Kings -- at least briefly -- were able to shrug off all of the criticism that they play down to their opponents.

The Kings have been playing as well since the break as they have at any point in the past three years. While they have been ultimately successful in the past few seasons, the Kings are playing with a level of consistency and execution right now they they pretty much haven't exhibited for more than a few games at a time since the 2012 playoffs. Over their past four games they've controlled 59.7% of all shot attempts at even strength, a nearly 3% higher than their already league-leading season totals. A game-by-game look shows that the Kings have been purely dominant lately: 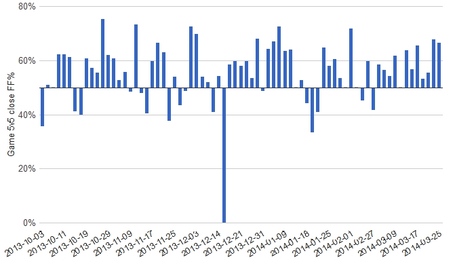 As you can see here, the Kings have controlled the majority of unblocked shot attempts in close situations in each of their past 12 games. They have dominated the puck, plain and simple. In fact, they've tilted the ice so hard that looking at their zone starts is mostly pointless.

Dustin Brown has faced the toughest zone starts in the past four games. He's received exactly as many offensive zone starts as defensive ones, and the numbers only get more ridiculous from there. As a team, Los Angeles has started 57.85% of its end-zone starts in their opponents' zone. To put that in another perspective, if the Kings were a player in their past four games, they'd be giving themselves the kinds of minutes that Darryl Sutter gives to Jake Muzzin. In fact, a 57.85% O/Dst% would give them the 58th softest zone starts in the league this season. Basically, the Kings are giving themselves minutes, as a team, that you'd give to players you don't trust on a defensive zone draw.

The Kings have essentially overwhelmed their weak competition with a style of play that isn't even typical of what they've brought to the table so far this year. The Kings are playing up-tempo, free-flowing hockey for maybe the first time under Darryl Sutter. Over the course of the entire season, the Kings have gained the blue line with control on about 45% of their entries. That's a staggeringly low number and one we bring up with frequency. The league average is close to 50% and the Kings are nowhere close. It's been a source of frustration and has led many to wonder if this is why the Kings just don't score goals.

Either the Kings are paying attention or they're just, finally, taking advantage of bad opponents. In their past four games, the Kings have controlled the puck on 55% of their entries, another jump up from the considerable improvement that I noted in their post-Olympic break numbers a week ago. In fact, the only forwards that didn't eclipse the 50% mark in the past week were Jarret Stoll, Dwight King, and Tanner Pearson. Even that wasn't for a complete lack of effort, as all three had somewhat high numbers of failed controlled entries.

This isn't just Marian Gaborik impacting team numbers. This is a conscious team effort to gain the line with control. This can't be exhibited in any better way than pointing out that the man leading the controlled entry charge is none other than Trevor Lewis. Lewis had previously been the Kingiest King that ever Kinged by dumping the puck in way more than he should have, especially given his well above average foot-speed. However, in the past week, he's controlled the puck on entry a staggering 82% of the time. 82%!

This all leads to the final point: the Kings are absolutely killing it right now. Their power play could probably use some work and the PK has been merely average almost all season, but at even strength you'd be hard-pressed to find a team that can keep up with the Kings at this current point in time. They've controlled 59.7% of shot attempts, 71.4% of goals, and 60% of scoring chances at even strength in the past week. These numbers are very in line with what they've done overall since the break as well.

Perhaps the best thing about this mini-run for the Kings is that they're doing it largely without contributions from Anze Kopitar. No, he is not hurting the team. No, there is not a reason to be concerned about him. However, the Kings, for the first time all season, are getting contributions from the entire lineup. Kopi no longer has to be a factor night in, night out for the Kings to win. Adding Gaborik, Pearson, Toffoli, and eventually Linden Vey while sacrificing Matt Frattin, Jordan Nolan, and Colin Fraser is simply excellent work by Dean Lombardi. The argument could be made that the latter two should not have been here at all this season, but the fact is that they were. Lombardi recognized the problem and addressed it. The Kings are now loaded with an objectively deeper team than the one that blew through the 2012 playoffs.

At the bottom I'll attach a sortable table so you can rummage through the numbers yourself.