Minnesota scores twice in the third period to win 3-2, as the Kings look terribly sloppy and pay for it.

After 40 minutes, it looked like the Los Angeles Kings would grind out a win against the Minnesota Wild, despite not being at their best. No such luck.

It wasn't an ideal start to the game, as the Kings and Wild (SURPRISE) didn't generate a ton of action in the first period. 6:30 into the game, LA picked up their second shot and the fourth shot on goal of the game. It came off the stick of Alec Martinez, so of course, it went in! Jared Spurgeon had a chance to grab a loose puck behind his own net and whiffed, and Anze Kopitar swooped in, took it, looped around the net, and fed a streaking Martinez. Martinez wristed it past Ilya Bryzgalov, drawing only somewhat ironic comparisons to Bobby Orr. Even if the shooting percentage is unsustainable, there's something to be said for Martinez's offensive instincts lately.

Jake Muzzin was prominent in his own way early on, drilling Nino Niederreiter with a hard but clean open-ice hit. Niederreiter skated off slowly and would not return. So when Muzzin lined up Jason Pominville a period later, some scuffling ensued, and Matt Moulson took Muzzin down, hard. The ensuing Kings power play was punchless, as was their other power play on the evening. In fact, the Kings only got one shot on the man advantage tonight. So did the Wild, but their lone shot was a goal. Mikael Granlund took a shot which looked to be going wide, but Zach Parise got in front of Robyn Regehr and tipped it in behind Jonathan Quick. (And yes, with Quick way out of the crease, Parise was literally behind Quick.)

The remainder of the game was going to be settled at even strength. The Kings finally found their legs near the end of the first, and played fairly well in the second period aside from Parise's goal. The Wild did have two golden opportunities in the second, though; Kyle Brodziak was all alone in front but blasted his shot off the crossbar, and Quick had to make an excellent double save on Justin Fontaine's breakaway and Brodziak's follow-up shot. Justin Williams put the Kings back in front thanks to the patience of Marian Gaborik, who held the puck and passed instead of shooting. Here's a helpful illustration of why it worked: 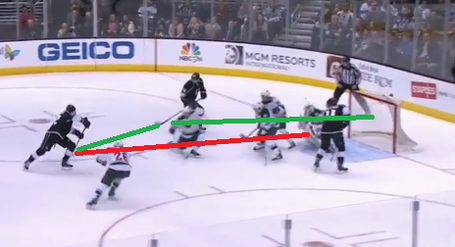 The Wild have had a penchant for third period comebacks lately, and when the Kings started off the third largely in their own zone, it was a bad sign. It got worse when Matt Moulson escaped Jarret Stoll's grasp, darted to the front, and beat Quick to tie the game at two. The Kings were denied another power play chance when Ilya Bryzgalov's puck flip into the stands was unpenalized, and 54 seconds later, the Wild struck. Charlie Coyle (who was a constant presence all night) found Mikko Koivu in a soft spot, and he beat Quick cleanly with a one-timer to make it 3-2. An uneven night for Quick, and a more uneven one for the Kings, who simply couldn't get anything going after that. Shots in the final ten minutes for LA: two.

This game was a lot more important for Minnesota than Los Angeles, and it showed in that third period. The Kings are now at a 99.6% chance of finishing third in the division, and have six more games to recapture the form they had in the rest of March.