The Kings win their fifth straight with their most effective all-around performance since the Olympic Break. The finishing could still use some work.

Hooray, the Kings are good again! The Los Angeles Kings returned from the break with a wild 6-4 win over Colorado, but since then they've won three straight with the same formula: score a couple goals and turn up the defense. Tonight's 2-1 win was a vintage Kings victory; they should have won by more, but converted exactly as many chances as they needed to.

(Also, this means that LA is wrapping up a season series with the Montreal Canadiens with only positive memories. THAT is unusual.)

The Kings' top line earned the first two stars tonight, and they deserved it. Their contributions began early, as they set up the opener less than two minutes in. Justin Williams grabbed the puck after a defensive-zone faceoff and carried it, with control, into the offensive zone. Williams then dropped the puck back to Tyler Toffoli, and Jake Muzzin jumped up into the attack. Toffoli fed Muzzin, and Muzzin had tons of room to squeeze a wrister past Peter Budaj. Though that was the only LA goal of the first period, it was only one example of fine puck movement in the first. Especially in the first ten minutes, the Kings were on point with their breakouts and their passing; they were only held back by their inability to get the puck on net.

That became a problem when Montreal tied it. Jonathan Quick looked good in net, and had already pulled out a spectacular stop on Daniel Briere from two feet out, but his kryptonite right now is his own team. P.K. Subban flipped a shot at the net which Quick got his blocker on, but it bounced off the skate of Jarret Stoll and in. (Recall that the only other goal Quick has given up since the break was off the glove of Robyn Regehr.) Subban was more effective than any Canadien at driving the action tonight, so Michel Thierren's decision to play Subban sparingly until the final stretch was odd. But at least Alexei Emelin played a lot!

The period ended even in shots (5-5) and goals (1-1) despite the Kings clearly carrying the action. LA kept it up and got back on the board in the second period on the power play. The man advantage has improved since the break, and tonight, Jeff Carter got the goal after some more solid puck movement. Alec Martinez moved across the blueline to keep the puck in the zone and threaded a pass to Anze Kopitar between the circles. Kopitar made a delightful backhand pass to set up Carter...

... and yeah, Carter's shot was perfectly placed too. 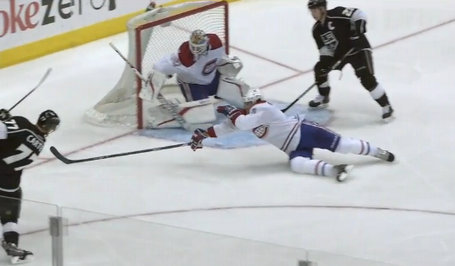 So LA had the lead back once more. Both teams found great chances on the power play in the second; Alex Galchenyuk's wrister in tight was beaten by both Quick and the post, while Carter, Toffoli, and Kopitar hacked away in front of the net but sent the puck just wide. The best chance, though, came on another Kings PP in the dying seconds of the period (and thus, the McFlurry Minute). Doughty rung a shot off the pipe, and the rebound came to Kopitar at the side of the net. Peter Budaj was way out of position, and any shot on net would have gone in; however, Kopitar shanked his attempt, and he skated off with his hands on his head after the buzzer.

It wouldn't matter in the end. Montreal finally got some pucks on Jonathan Quick in the third, but Quick stopped all eight shots. LA probably should have added another goal on either a Carter breakaway or a wild flurry on their final power play, but that's how the Kings go. The Canadiens had looks too; David Desharnais drove the net but was turned aside by another great save by Quick. Montreal got a shot on Jonathan Quick at 12:46 of the third period (a long slapper by Daniel Briere), but didn't even get another shot towards the net until the game's final minute. In that final minute Quick made a couple good stops, including a more straightforward save on a Desharnais slapper, but the Kings' defense had done a tremendous job making sure that he only needed to come up big at the very end.

Five straight wins for the Kings as they head into the trade deadline. Though Toffoli-Kopitar-Williams was the most effective offensive line, the King-Stoll-Brown combo also had a really good night, and Tanner Pearson once again looked like he belonged on the ice. Dean Lombardi's not going to change his plans based on a week of play, but the Kings are at least showing that even if there is no big deadline move, they can win games with the lineup they have now.