It's the rare game in which the Kings dominate shots, get most of the chances, and win in regulation.

So Marian Gaborik had a quiet debut. If every game goes like this one did, who cares? The Los Angeles Kings won 3-1 over the Winnipeg Jets, and it probably wasn't that close.

So, the hype was around Marian Gaborik . He started out on the first line with Anze Kopitar and Justin Williams and looked... pretty good! He showcased his speed on a few occasions, got a shot on goal on his first shift, and played on the power play. No points, no real dazzling stuff, but a decent performance in his first game. The other offensive players, whether or not it was in response to Gaborik, also had their moments early. In particular, Jeff Carter nearly scored one of his normal drive-down-the-wing-and-take-an-unstoppable-wrist-shot goals, but his shot clanged off the post. Immediately after that, Dustin Byfuglien hit Jake Muzzin into the benches, and Drew Doughty had to break up a 2-on-1 going the other way.

Jarret Stoll also broke up a near-goal on his own end, with his stick getting in the way of Matt Halischuk. But that was all the Jets could muster in the last 10 minutes of the first... 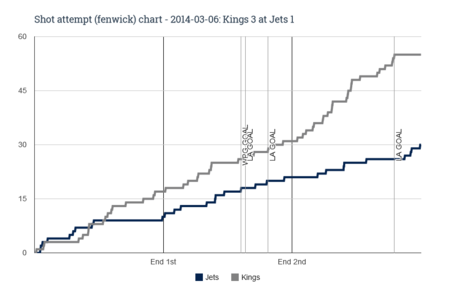 Though that didn't matter when the Jets got on the board first at the 12-minute mark of the second. Evander Kane scuffled with Drew Doughty and Jeff Carter got some shots on Ondrej Pavelec, but nothing got through until Winnipeg capitalized on a defensive lapse. Unexpectedly, the culprit was Drew Doughty; with the puck in the corner, Doughty coasted to cover the front... too slowly. Olli Jokinen was all alone in the slot to slam home a pass by Kane, and it was 1-0. But 42 seconds later, the Kings struck back in ugly fashion; Jarret Stoll fed to the front, and Dustin Brown... um... directed the puck past Pavelec.

Jonathan Quick handled his business for the rest of the game, with a third-period shorthanded chance for Kane probably standing as his toughest save. So when the Kings took the lead late in the second, it was bad news for Winnipeg. Tyler Toffoli (big, tough Tyler Toffoli!) came in for a hit on Tobias Enstrom along the boards, and Enstrom tried to make an ill-advised pass across the ice. Mike Richards picked it off streaking down the middle of the ice, and he knew exactly what to do with it, blasting a shot up high past Pavelec.

Now holding the lead going into the third, the Kings proceeded to go out and outshoot the Jets 20-5.

Ondrej Pavelec earned the #1 star (from the Winnipeg media, hmmmm) by stopping 19 of those shots and 38 overall, to keep his team in it. However, LA eventually did break through for that insurance goal, via Alec Martinez. Blake Wheeler took an obvious high sticking penalty which was roundly booed by the Winnipeg faithful, but it set up a Kings power play that had looked dangerous all night. It finally succeeded when Alec Martinez borrowed Drew Doughty's spin move to evade a defender, dangled to the middle of the ice, and beat Pavelec. It was nice. Really nice.

So that was that, and the Kings easily held on for their sixth straight victory. Though the Kings didn't blow the Jets out of the water, they consistently looked like the better team, and the power play in particular generated a number of chances. Despite having a new player in the fold, the Kings didn't miss a beat. Going forward, that's a great sign.