The Kings and Sharks are two of the strongest puck possession teams in the NHL. The Kings lead the league in that department while the Sharks are 5th . Let’s take a look at how they’ve matched up against one another in the recent past in order to see if we can spot any patterns and edges for each team.

As we’ve noted before, head coaches Todd McLellan and Darryl Sutter have very similar approaches to deployment. They don't seem to pay too much attention to zone matching and generally deploy players in a power vs power strategy. Head-to-head, both teams' top 6 played pretty equal minutes against one another. There are slight differences however, as the Sharks tend to throw in a bit more line-matching. 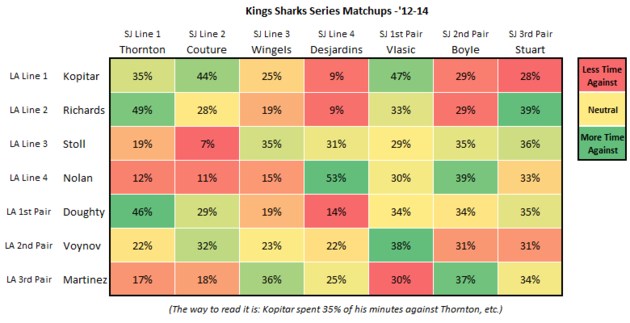 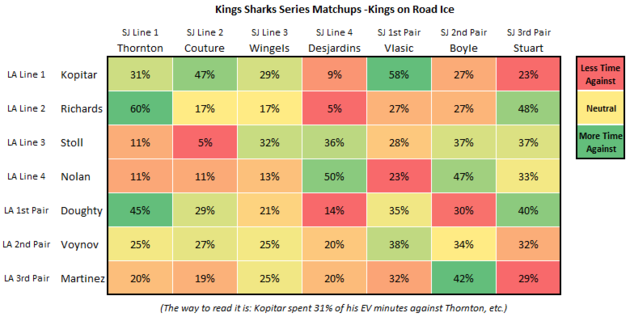 It is interesting to look at the differences in home vs road deployment. Home teams get the benefit of making the last line change. Thus, they have the benefit of choosing which players they would like to matchup against opposing players more often.

There is a stark difference in who Mike Richards has matched up in Los Angeles as opposed to San Jose. Looking at LA’s home line matching chart, they pretty much have been happy to roll their lines and defensive pairings in a power-vs-power set up. Richards gets rolled very evenly against the top 6, seeing slightly more minutes against Couture than Thornton.

When San Jose has the benefit of making the last change, however, they have preferred to keep Thornton away from Kopitar and have hard matched Thornton to Richards. We’ll look at the results of those matchups below, but, as you might imagine, the Sharks do this for good reason. Anze Kopitar and the Kings top line has run roughshod over the Sharks in recent years no matter who they have been on ice against.

Thornton has been a tough matchup for Mike Richards and the Sharks seek to exploit that to even out the effects of a dominant Kings first line. Given that the Sharks have home ice advantage, we should see a lot of Richards versus Thornton.

Additionally, the Kings tend to get Stoll out against Thornton a little more at home. The effects of this seem to be freeing up Mike Richards and the 2 nd line to get some softer minutes across the Sharks bottom six.

Marc-Edouard Vlasic is hands down the Sharks best defenseman and is having a strong season in which he should be getting some Norris trophy votes. Anze Kopitar is the King that has seen the biggest chunk of his time against Vlasic, yet the difference between home and road games is significant. When in San Jose, it seems as though McLellan gets Vlasic out against Kopitar as much as he can and tries to free up Dan Boyle to get softer minutes across LA’s bottom six.

In Los Angeles, however, Kopitar sees much less time against Vlasic and much more time against Boyle and Brad Stuart (one of the weakest links of the Sharks defense). It’s Richards who draws Vlasic the most in Los Angeles. What is most interesting in all this is seeing that in San Jose, McLellan pairs his third defensive unit with his top line, thereby sort of sheltering them by giving them minutes with top players in a beneficial matchup. In Los Angeles, it’s a lot tougher for the Sharks to hide Stuart and thus he sees a lot more time against Kopitar.

LA also messes with their defensive units to try and get better matchups. At home Doughty spends more time with Kopitar, knowing that they’ll be able to get him out against Thornton a lot of the time. On the road, Doughty spends more time backing up Mike Richards as the Kings have identified that Richards will draw Thornton a lot more in this situation. The effects of this are that the Sharks can get some softer matchups for their other lines against the other Kings defensive units. 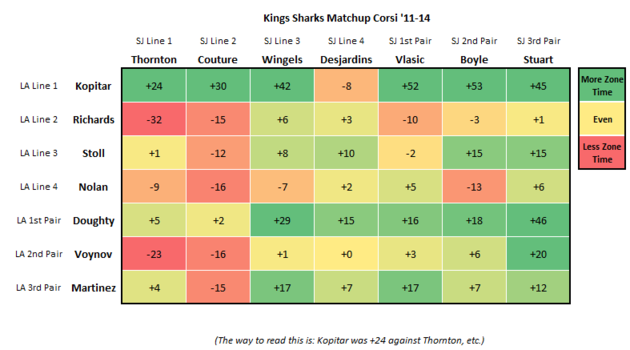 Kopitar has been dominant pretty much across the board. Overall, he is +116 in even strength shot attempt differential against the Sharks in the 22 games since the start of ’11-12 season including last year’s playoff series. That number is staggering. Basically, no matter who the Sharks have thrown out against Kopitar the Kings dominate in possession. The only blot for Kopitar on the above chart are his numbers against Desjardins, which can basically be tossed out since he’s seen such little time against him. Kopitar has mainly been matched across the Sharks top players and has been able to have his way with all of them.

There is less good news for the Kings among the bottom nine. Mike Richards has been thoroughly dominated by Joe Thornton and we can now see why McLellan likes to push that matchup wherever he can. There is little reason to believe this trend will change as Richards has been heavily out-chanced against the Sharks this year and has struggled in the neutral zone .

With the Kopitar and Richards lines pretty much cancelling each other out, that makes the battle of third lines all the more important. The Kings are currently lining up with Brown-Stoll-Toffoli as their third line. The Sharks may be going with Wingels-Sheppard-Hertl. This is where the Kings could push a decided edge:

Over the last three seasons and including the playoffs, third line fixture Tommy Wingels is an eye popping -66 against the Kings in even strength shot attempt differential. James Sheppard is -55. Hertl comes in at a much better +8, but that is in many fewer games and while spending the bulk of his time alongside Joe Thornton. The members of this newly constructed Kings third line have all had a lot of success when matched against Wingels and Sheppard in the past. It is also possible that the Sharks will move Joe Pavelski back down to centering the third line. Pavelski has done much better against the Kings as he is -4 against them and -8 against Stoll in the recent past.

The Kings new found forward depth since the acquisition of Marian Gaborik should give the Sharks fits in the matchup department. In years past, the Kings have rolled King-Stoll-Lewis as their third line and even they have all had success against the Sharks (Stoll +21 Corsi over last 3 years). This new look third line is much stronger on paper and if they can improve on the numbers of the Kings third line of the past, then the Kings will be very hard to beat.