We've taken a look a several different facets of the series thus far:

Nick took a look at zone entries and scoring chance numbers between the two clubs.

I took a look at line matching and some of the results of that.

Now, we'll turn our attention to overall numbers and some 100% rational and objective predictions. 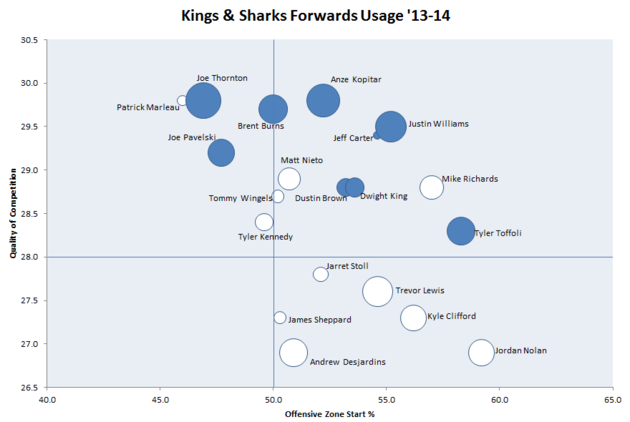 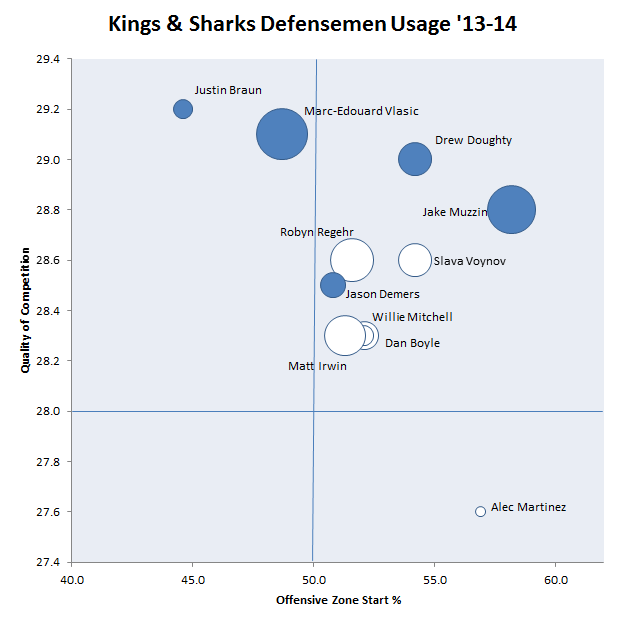 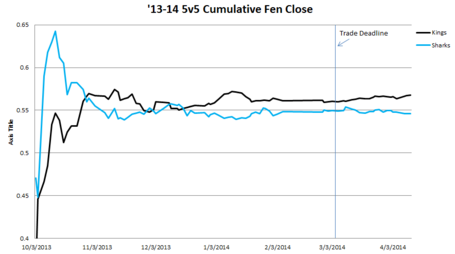 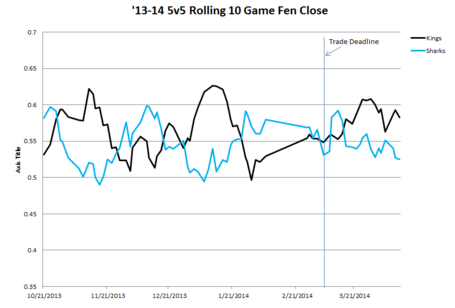 Langluy: Kings in 4 because every successive game shaves years off of my life and I already have a very high ambient stress level. Also, James Sheppard remains the Sharks' third-line centre because Todd McLellan loves the Kings almost as much as we do.

Eric: Kings in 7. It seems like every single neutral fan is jumping on the Sharks' bandwagon, because the Sharks are Cup-less and people are entranced by the adorable Tomas Hertl. So, San Jose will be eager to show these newcomers what being a Sharks fan is all about. What better way to do that than by losing in the playoffs?

John: Kings in 6. The Sharks are the Sharks. The Kings are the Kings. What do I really have to spell out here?

Andrew: Kings in 4. I'll further predict that the Sharks respond to this debacle by hiring Randy Carlyle, who promptly trades Joe Thornton for Tyler Bozak. The Sharks enter a 20 year playoff drought. Attendance plummets. The tottering franchise finally moves to Saskatoon, hundreds of miles from the ocean, but keeps the Sharks nickname as an ironic touch.

Robert: Kings in 0. Sharks decide not to show up for the series due to sleepless nights recounting what Anze Kopitar has done to them in the past.

Ryan Dunn (Battle of California): That little turd Hertl will somehow be a real pain in the ass for the Kings, but only if they get him off the third line. Every time he is out there against Dustin Brown he will collapse on the ice and just sob uncontrollably. As for Brown, I expect the Sharks to be "out for revenge" and probably take some stupid penalties trying to level him, which will cost them a game (sort of like last year). In the meantime, goaltending will be at the forefront of the series, as Niemi coughs up rebounds and Quick lets in softies. Neither goalie gets benched through six games, and the Kings close things out at home.

RudyKelly (Hell): The series is a good, competitive contest between 2 very good teams and the winner is the team who got the luckier bounces. Stoll's line does better than you'd think while Richards' line does about as well as you'd think. Voynov pots a few goals and Martinez doesn't. Sharks fans continue to be hysterical.