What went wrong and how will it get better?

Share All sharing options for: What went wrong and how will it get better?

The Kings were terrible in pretty much every aspect of the game over the first two contests of the series. This seemingly came out of nowhere given the Kings had been one of the best teams in the league since the Olympic break.

A quick stat comparison from Extra Skater shows just how bad it’s been from a possession standpoint in close situations:

Add that into the fact that the Kings have given the Sharks twice as much power play time as they’ve received and an .822 team save percentage and you have a catastrophe on your hands.

Jonathan Quick’s play in these first two games has been awful, but in truth, it is one of the least concerning aspects going forward. It’s just doubtful (though far from impossible) that Quick will maintain such a terrible save percentage going forward and he’ll likely rebound.

What was most concerning is that the Kings had the ice tilted against them in the most important minutes of the first two games. Where were the Sharks able to push their edges? 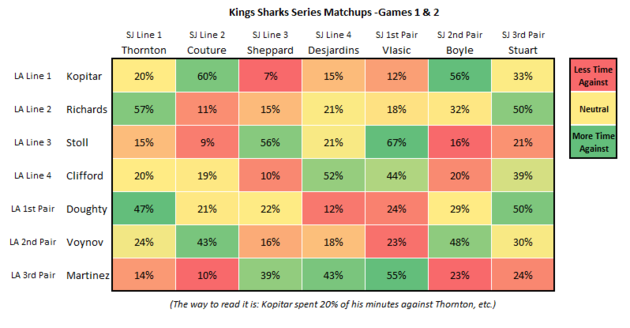 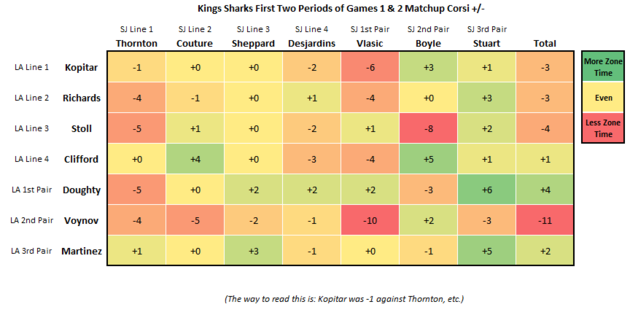 If you read our series preview, you will remember that it was pretty much a given that the Kings top line centered by Anze Kopitar would dominate. Over the last 3 seasons against the Sharks, the Kings owned 58% of all shot attempts with Kopitar on ice over 22 games. A staggering number, which just means, that the Sharks had an extremely hard time getting control of the puck when the Kings top line was on ice.

Without Kopitar over that time, the Kings controlled just 51% of the attempts. For the Kings to be successful in this series they need the Kopitar line to dominate. Over these first two games that was far from the case.

The Sharks matched their second line of Marleau-Couture-Nieto and defensive pairing of Hannan-Boyle against the Kings top line and were able to stop them in their tracks. The way the Sharks did this was by attacking the weak play of the Kings second defensive pair (who have been backing the Kopitar line).

Over the first two games Marleau-Couture-Nieto gained the Kings blueline 17 times in 25 attempts. That is a controlled entry percentage of 68% which is extremely high and has resulted in copious quality scoring opportunities as the Sharks have out-chanced the Kings 10-2 with Couture on the ice.

The Sharks are specifically targeting the slow-footed defensemen on the Kings back end and are having their way with them. In game one, Regehr was paired with Voynov and got destroyed. In game two, it was Mitchell and Mitchell’s underlying numbers over the first two games have been woeful.

The Kings like to get Drew Doughty out against Joe Thornton as much as possible. That means that on the road they back the Richards line with Doughty because they know the Sharks like the Richards-Thornton matchup.

At home, since they can get Kopitar out on the ice against Thornton, Muzzin-Doughty will likely be backing the Kings top line (with Regher subbing in for d-zone faceoffs). This should help the production of the top line immensely as their defensemen likely won’t consistently get throttled in the neutral zone.

Of course, this means that the Sharks 2nd line still gets to face the Kings second pair along with a weaker group of forwards.

The question is, which matchup will result in a bigger edge? Kopitar vs. Thornton or Couture vs Richards? And if they end up cancelling each other out, then that makes the battle of third lines extremely important.

Having the advantage of the last change has played a big role in games between these two teams in the recent past. Over the last three seasons (including the playoffs), home teams are 22-1-1 in this series.