After a back-and-forth game, the Kings can't take advantage of a dominant start to OT and lose on an unfortunate deflection.

Tonight, the Los Angeles Kings made beneficial lineup changes, got contributions from skill players, got pretty good goaltending, and totally outplayed the San Jose Sharks in the most crucial minutes of the game. It wasn't enough, and the Kings are now one game from elimination.

In the first period, Freddy Foreshadowing made an appearance as the Sharks scored the game's first goal on a lucky, fluttering shot. Dwight King took a tripping penalty after the Sharks killed off a penalty of their own, and Joe Thornton's attempted pass to the slot deflected out to Brent Burns. Burns wound up for a slapper, and Jonathan Quick slid over to cover the angle. However, Burns nearly whiffed on the shot, and the puck knuckled slowly into the net as Quick helplessly slid away. It probably would have been stopped if Burns had made full contact; instead, it was 1-0.

The Kings and Sharks played the first period in cycles; a couple minutes of Sharks pressure here, a few minutes of Kings pressure there, and so on. Check out the shot attempts chart below; the first ten minutes was mostly Kings, while the second half was a lot more even. LA got most of their whacks during an unsuccessful power play. Quick reached behind him to cover up a decent Sharks chance at the end of the frame, and the Kings went into the second down by a goal. 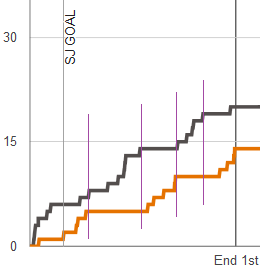 The Kings got their third man advantage of the game when Jason Demers put the puck over the glass, and they finally made the Sharks pay for their sloppy early play. Set up by Tyler Toffoli's cross-ice feed, Jarret Stoll one-timed a shot high past Antti Niemi to tie the game. (Tanner Pearson was also on the Kings PP; he played 13:01 tonight, more than Toffoli and Jordan Nolan, and nearly as much as Trevor Lewis.) It was a deserved goal for Stoll, who was often the best King on the ice tonight. Marian Gaborik then scored one of the goals of the season to put LA on top; Dustin Brown forced the puck loose from Andrew Desjardins, and Gaborik picked up the puck inside his own blue line. A 3-on-2 with Stoll and Alec Martinez ensued, and with the defensemen taking away the pass, Gaborik simply did it himself.

The Kings had utterly dominated the second up to that point, with the Sharks not even attempting a shot in the first eight minutes. However, the ice immediately tilted in the other direction, and San Jose tied the game within two minutes. Demers took a point shot as Robyn Regehr got tangled with Quick, and when Matt Nieto tipped the puck up in the air, Quick was flat on his stomach. This was the second of three dumb goals for San Jose, as Regehr continued what was an off night for him. (This opinion was shared by many people.) On the bright side, a number of defensemen bounced back tonight; Willie Mitchell and Alec Martinez had easily their best games of the series, while Drew Doughty had an assist on that Stoll goal and went back to playing 28 minutes. As he requested.

The Kings' fourth and final power play was split over the last minute of the second period and the first minute of the third. With 25 seconds left in the second, Gaborik had all the time in the world in the slot, but rang his shot off the post behind Niemi. To the Kings' credit, they weren't fazed, and the next time they got an opportunity to take their time and set up a PP chance, they scored. Anze Kopitar carried the puck in, Jeff Carter set up in front, and Kopitar's wrister was tipped by Carter past Niemi. Nice and easy.

San Jose responded with a tremendous period. With the Kings playing a less aggressive third period, the Sharks jumped all over them, and fired 23 shots on net. Quick (who was NOT to blame for tonight's loss, screw your narratives) stopped 22 of those shots, but Tomas Hertl did find the equalizer. Blame Mitchell, Carter, and Mike Richards; Hertl was allowed to get four whacks at a puck in front with those three players right around him, and the fourth bid got past Quick. Richards did come back and get the best third period scoring chance for LA, as he chipped a rebound over Niemi but just wide of the net. Meanwhile, Quick made an athletic double save on Demers and Logan Couture on the PK with 15 seconds left, and we went to OT.

The Kings deserved to win based on the overtime period. They were faster, more aggressive, and tested Niemi five times in the first five minutes. Gaborik had the best chance, forcing a toe save by Niemi. However, the Sharks finally got a cycle going in the offensive zone, and it resulted in the game-winner. Marleau is a prolific playoff scorer, but this wasn't his prettiest; a soft backhand on a bouncing puck, off of Slava Voynov's stick and over Quick's shoulder. This game was much more like the coin flip that people were expecting from this series, and it came up Sharks.

Game 4 is Thursday. A 3-0 deficit in a series often dominated by home teams is daunting, but if LA can come back and win Game 4, who knows?