I guess we're not gonna see a bunch of 2-1 games this series like we did last year. Thankfully, allowing three goals was not a problem tonight, as the Los Angeles Kings put up half a dozen on the San Jose Sharks.

In Games 1 and 3, the Sharks got on the board quickly; like in Game 2, it was the Kings who got an early goal tonight. As usual, it was courtesy of the first line, though the top trio's newest face was instrumental in setting it up. It was a good night for struggling Kings, and Dustin Brown had a vintage Dustin Brown evening. When Voynov moved the puck ahead to Brown out of the defensive zone it seemed innocent enough, but when Brown zipped by Logan Couture the top line had a 3-on-2. Anze Kopitar and Marian Gaborik went to the front, and Brown shot far-side to set up a Gaborik goal on the rebound.

That's not to say it was a great start, though. The Sharks got considerably more zone time early, and after the goal, they dominated even more at even strength. However, the Kings slowed down the pace as the first period wound down, and it looked like they'd get to the locker room with a one-goal lead. That all changed with 7.3 seconds left; with the Kings' defense running around, Scott Hannan's shot was stopped, but James Sheppard was alone in front and knocked the rebound out of midair. Robyn Regehr and Slava Voynov have had problems on the defensive end this series; one more problem resulted in a 1-1 game at intermission.

So, about that defensive coverage... pic.twitter.com/j49B7sX2qt

However, the Kings didn't allow the Sharks to dictate play coming out of the gates in the second period, and Raffi Torres (bless his heart) gave LA an opening by going well out of his way to board Dustin Brown. Voynov started another successful breakout, and Jake Muzzin's cross-ice pass was tipped along by Mike Richards to Justin Williams. The Williams shot wasn't perfectly difficult, but with Richards charging towards Antti Niemi, the puck found a way through. The Sharks remained quiet but did get the goal back five minutes later, when Jonathan Quick gave up a big rebound and Matt Nieto chipped the puck off of Alec Martinez and in.

Mike Brown has been going after Jonathan Quick, and midway through the second, the Kings finally did something. It started with Quick, who shoved Brown in the face after a snow shower, and it culminated in Kyle Clifford roughing Brown the next time he got anywhere near Quick. Clifford and Brown had picked up matching misconducts earlier, but after the Kings killed the ensuing Clifford penalty, the animosity faded. For a while. 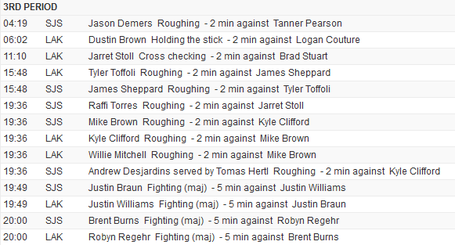 (late in the game, the Sharks got mad and the Kings didn't like that)

The teams exchanged further scoring chances in the game's most even period, but the Kings got the important go-ahead goal... and another one! First, a fortuitous bounce (which we begged for after last game); Willie Mitchell's shot caromed off the end boards right to the side of the net, where Williams scored on a midair deflection of his own. Then, three minutes later, a massive insurance goal. Tanner Pearson and Tyler Toffoli got in on the forecheck to prevent San Jose from clearing the puck, and Toffoli was rewarded when a Martinez deflected shot ended up on his stick. Toffoli's wrister beat Niemi, and the Kings got more than three goals on the board for the first time all series.

LA essentially sealed it with their fifth goal, and Gaborik's second, in the first minute of the third period. The first line did it again, in typical Kings fashion; Doughty dumped it in, Brown and Kopitar forechecked and got possession, Koipitar set up Gaborik, and Gaborik finished. That fifth goal, more than anything, was a comforting reminder of the Kings at their best. The goal chased Niemi and sent the third period into a continuous spiral of Sharks shooting and players scuffling. (The shot and scoring chance numbers in the third are ugly for LA and made the end result look a little negative, but when you go up by three goals, that's bound to happen.)

A Stoll offensive-zone penalty (drink!) prevented an apparent Williams hat trick goal and allowed Joe Pavelski to tally a power play goal soon after. That was as close as the Sharks would get though, as Jonathan Quick finally got his rebound control and composure back to shut the door. In the final three minutes, the frustrated Sharks (really, YOU'RE frustrated?!) succeeded in starting fights and slashing/shoving Kings all over the ice, but the Kings shrugged it off. Dustin Brown's empty-netter guaranteed that #SweepLA would remain a distant dream. It's 3-1 Sharks, but it certainly isn't over.