Defenseman Marc-Edouard Vlasic is out tonight, how big of a loss is that for the Sharks?

Share All sharing options for: Defenseman Marc-Edouard Vlasic is out tonight, how big of a loss is that for the Sharks?

According to CSN, Marc-Edouard Vlasic is out tonight against the Kings after a collision with Jarret Stoll in Game 5. How big of a loss is this for the Sharks?

Well, it's huge. This season at 5v5, the Sharks owned 58% of all attempts with Vlasic on ice. Without Vlasic, that number drops all the way to 51%.

Vlasic has been one of the NHL's best defenseman this season, as evidenced by this chart: 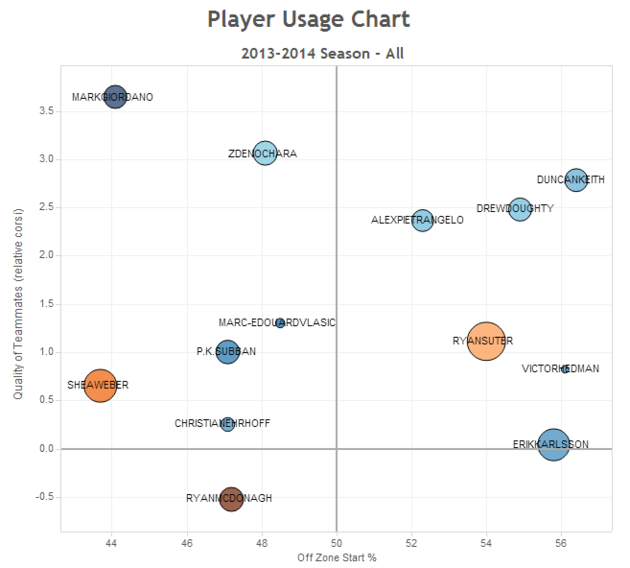 Among serious Norris contenders, only two defenseman have played with a lower level of teammates while still pushing the possession needle forward despite having more defensive zone starts than offensive zone starts.

Although Vlasic's possession numbers haven't been impressive in this series, he has drawn a rather tough assignment having spent most of his line matched against the Kings top line:

It'll be interesting to see what Todd McLellan does with his defensive pairings. Matt Irwin will get the call in game 6 but it seems unlikely he'd get top minutes with Demers on road ice. After Vlasic went down in game 5, McLellan rotated Boyle and Braun with Demers on the top unit. According to David Pollack, Braun-Demers is what most likely happens tonight.

The Kings should have a lot of options in how they choose to attack the Sharks' weakened defense. What the Kings usually do on home ice against the Sharks, is get their 2nd line out against San Jose's top pair which frees up the Kopitar line to exploit their depth pairings.

That strategy should be all the more effective especially if they move Braun up with Demers and allow the slow-footed pairing of Hannan-Stuart to get heavily exploited by the Kings' top line.